All the regular engines come with mild hybrid technology and the least expensive petrol (badged P200) has 197bhp. If that sounds like plenty of poke, it takes some revving to take it up to outside-lane overtaking speeds, and, when we tested it, the best it managed was 0-60mph in 9.9sec – not great when you consider that a Honda CR-V Hybrid beat it by nearly two seconds. The P250, with 247bhp, feels a fair bit brisker; Land Rover claims it will pull off 0-62mph in 7.3sec. We’re yet to try the top 286bhp P290 variant, but that's likely to be expensive to run – will talk more about running costs later on.

There's an entry-level D165 diesel and a D200 that replaces what our former favourite, the D180. We’re yet to try either, but Land Rover’s mild-hybrid tech has impressed us in other models so we'd expect the D200 to be the pick of the range, especially since it has a bit more power than the outgoing D180.

The final engine option is the plug-in hybrid P300e. Under the bonnet is a 1.5-litre petrol engine that drives the front wheels, while an electric motor drives the rears. A big battery pack allows it to travel up to 38 miles on electricity alone, according to official figures, and it’s rather brisk; the combined output of 305bhp means 0-62mph takes 6.6sec. That makes it the liveliest Discovery Sport, and even in electric-only mode the acceleration is sufficient to get you up to motorway speeds – gently.

Things are a touch bumpy around town if you’ve opted to have your Discovery Sport shod with super-sized 20 or 21in wheels. Thankfully, the smaller 18 or 19in wheels help take the edge off that, but there are still cushier large SUVs like the Honda CR-V. And over undulating roads, the Discovery Sport floats and wallows more than the Audi Q5 and BMW X3; it never feels so loosely damped that it’ll make your passengers go a verdant shade, though, and the ride improves on motorways, where it's quite a relaxing mile muncher.

P300e model feels a bit stiffer than the rest of the range. It is noticeably lumpier and also doesn’t control its body movements over dips and crests quite as well; a BMW X3 30e is softer but more stable, more of the time. 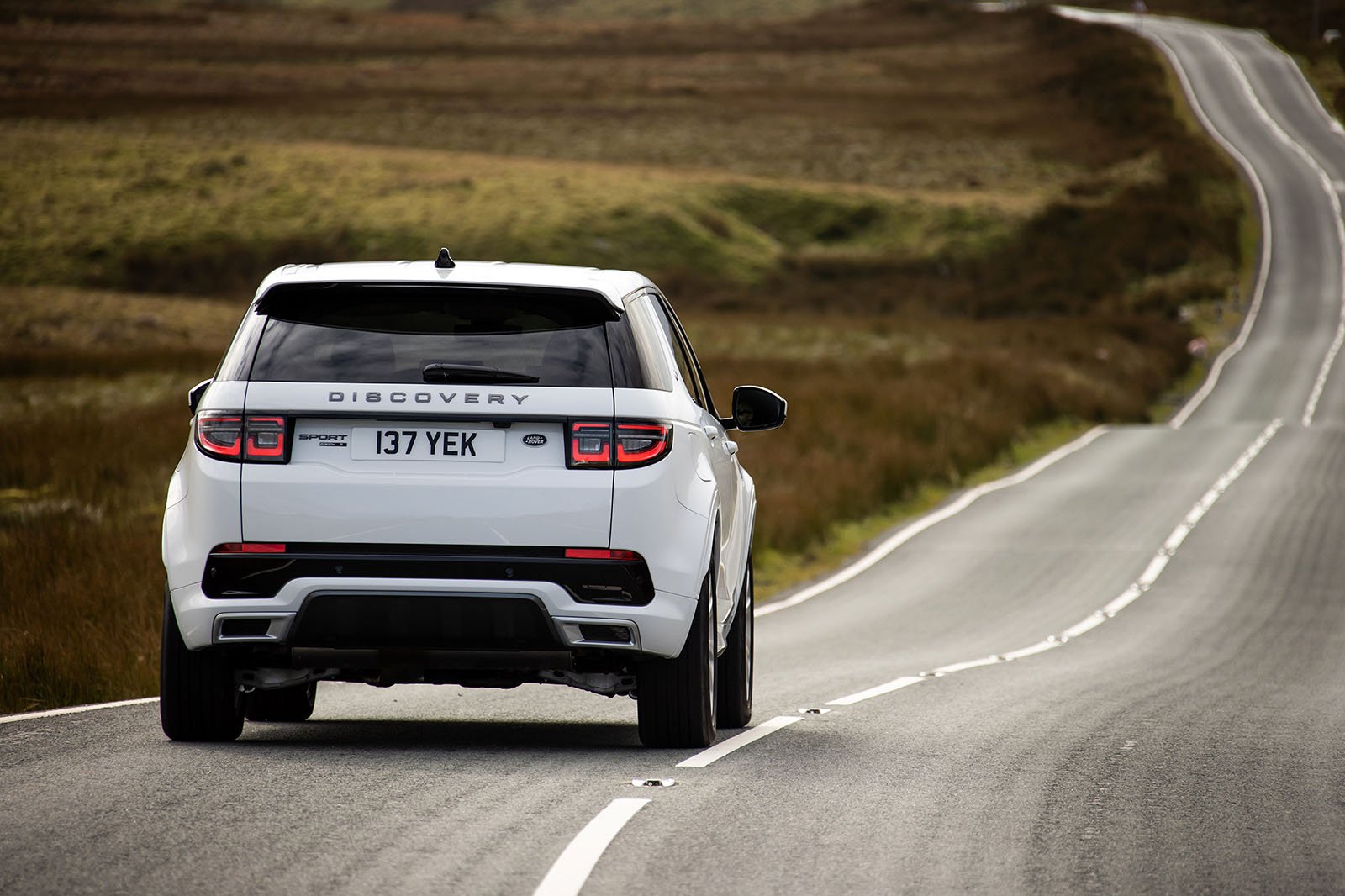 There is a noticeable amount of body lean when cornering with pace in the Discovery Sport and, with all-weather tyres fitted, not a vast amount of grip. It certainly isn’t as keen to scythe through S bends as keenly as the Q5 or X3, and never feels as agile along twisting country roads as the Jaguar F-Pace. The steering is a little too quick, given the car's ponderous nature, and overly keen return to its straight-ahead position to feel completely natural at speed, but it is light around town.

All in all, the Discovery Sport feels rather disjointed if you try to drive it briskly, and the heavier P300e is even more compromised. But what it lacks in on-road handling is more than made up for by its off-road capabilities – any of the four-wheel-drive versions will easily best their chief rivals in that respect. Diesel versions can tow a 2200kg braked trailer and the petrols can manage 2200kg. The P300e can’t tow quite as much; you’re limited to a maximum of 1600kg.

The plug-in hybrid P300e’s refinement impresses. You’re aware that the engine has three-cylinders – one fewer than the other engines in the range – with its background thrum, but it doesn't sound coarse or transmit lots of vibration through the steering wheel. Indeed, it’s better than the Range Rover Evoque P300e in that regard. The switch between power sources is smooth, if sometimes a little slow. It’s certainly much better than the clunky Volvo XC40 Recharge plug-in, but the far cheaper Ford Kuga PHEV is better still.

Of the conventional petrol engines, the P200 has a smooth stop-start system but sounds like a diesel at idle. It smoothes off with a few more revs, but the nine-speed automatic gearbox is pretty abrupt. We’re yet to try the D165 and D200 diesel engines.

Road roar is very well contained but you’ll hear more wind noise than you would in the X3 or Q5.