The Citroën C3 is anonymous no more, with this flamboyant new model taking styling cues from its popular bigger sister, the C4 Cactus. So, what do What Car? readers think of it?...

Citroën's C3 small car has been a fairly anonymous since its launch in 2002. The last-generation model, which went on sale in 2009, was a popular choice but fell short compared with rivals such as the Ford Fiesta and Seat Ibiza.

Although this new model shares its underpinnings with that car, everything else is new. Most prominent is the new styling, with multi-layered lights at the front and plastic Airbumps on the side doors, as with Citroën's bigger, and highly successful, C4 Cactus.

Inside, the car has a minimalist dashboard design, with a new infotainment touchscreen, and a focus on comfort for the seats.

At an exclusive preview of the new C3 in Chingford, East London, a team of What Car? readers gave their verdicts. 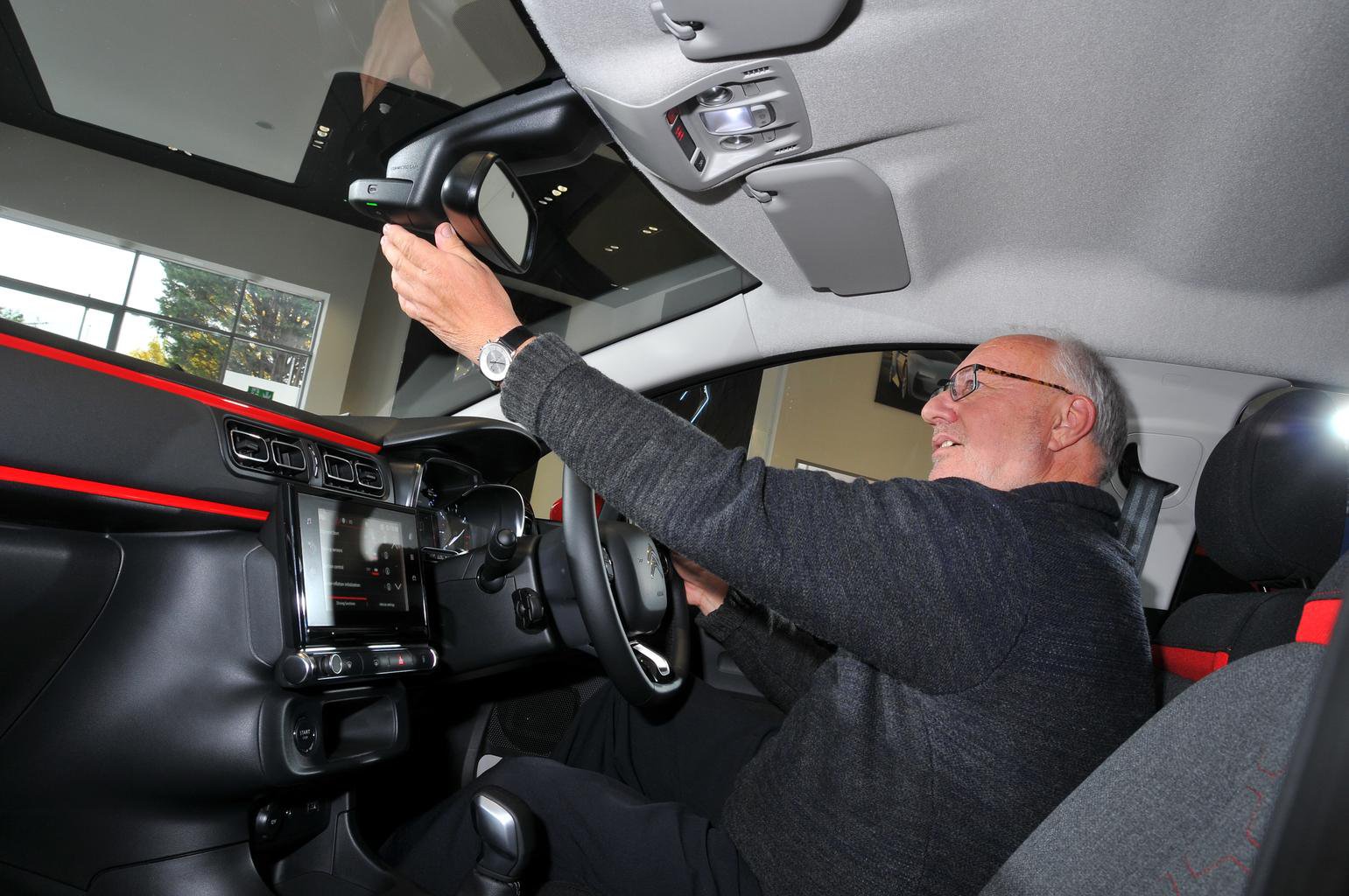 ‘It’s striking, and a breath of fresh air in comparison to the globular old C3, which wasn’t very appealing to a younger audience.

‘My absolute favourite design feature on this car is the new headlight clusters, which have the ‘squashed face’ look of the C4 Cactus, with the various lights on separate levels. The Citroen badge extending all the way across the front grille looks fantastic, too.

‘I like the comfort-led design philosophy of the car. Sporty interiors are so popular at the moment, but I like the ‘comfy chair’ seats, instead of hard, hugging sports seats that are so common now.

‘There’s double-layered insulation on the door seals to better keep out wind noise, which is brilliant.

‘It’s hardly like an Audi inside when it comes to materials, but I don’t understand why people get so hung up about plastic quality. This C3’s dashboard design is great.

‘There are three different fabric colour schemes available inside, but I don’t like any of them. This Urban red stitching with the black and grey fabric has too much going on. Unfortunately, the rear seats feel a bit harder than those in the front, and they’re shorter and narrower.’ 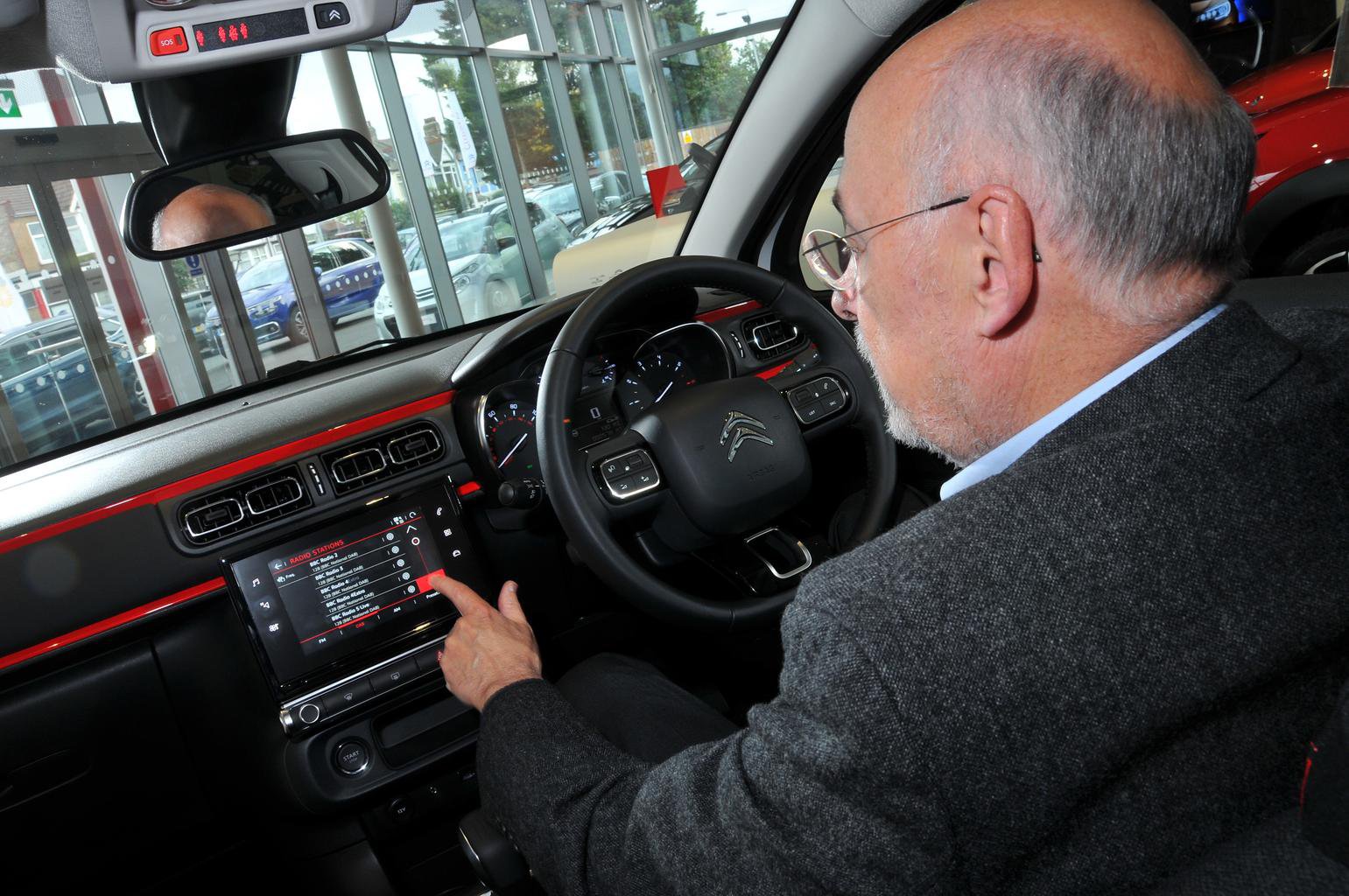 ‘Compared with the previous C3, this car is a big improvement in terms of exterior looks. I wasn’t expecting much at all, but it’s actually pretty desirable.

‘I’ve driven the C4 Cactus, and was really disappointed. However, they’ve carried across its promising elements and really made this C3 into what the C4 Cactus should have been; the styling is a bit better thought-out.

‘The Airbumps on this C3 are a bit gimmicky. Citroen say they protect the car from ‘dings’, but they’re mounted much lower down than on the C4 Cactus, so I’m not sure they’ll be as effective here. You can go without them for free, though.‘The central touchscreen is a bit slow and not very user-friendly for menu navigation, although that’s common of cars in this price range.

‘The radio aerial on the roof is ghastly. Most cars now have them conspicuously hidden, in the windscreen for example. It just ruins the profile of the C3, which is otherwise pretty attractive.

‘The equipment on this top-trim car is good – you get a touchscreen with a DAB radio, sat-nav, and a reversing camera. However, with the entry-level trim, you don’t much, even if the car does only cost £10,000.’ 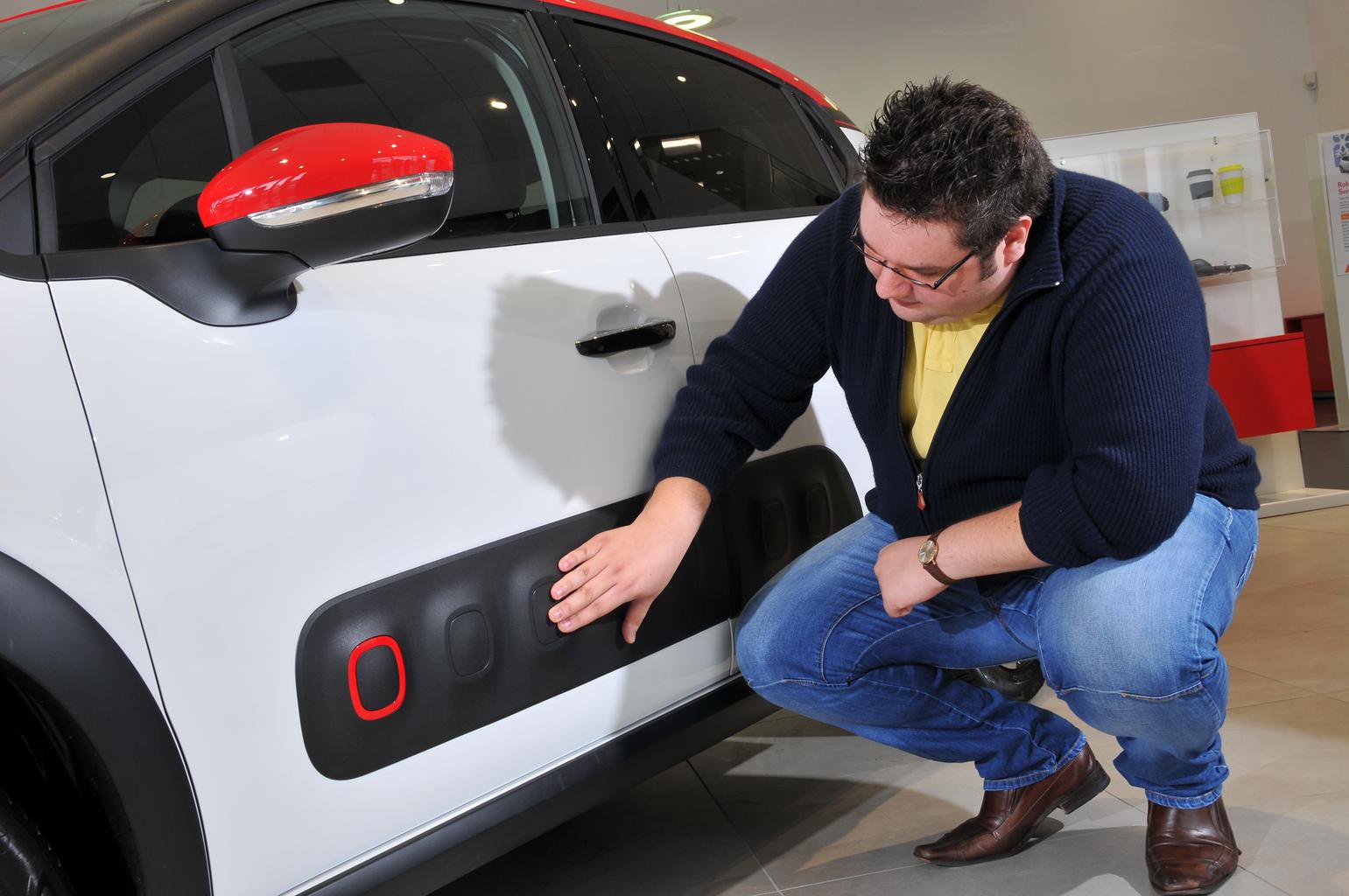 ‘I’m impressed with some of the refinements inside, particularly the dashboard and the touchscreen, compared with my old C3.

‘I think the range of colour personalisation is great for younger people. It’s typical French flair, and the looks great. I’m a bit more conservative, but thankfully you can get this car the same colour all over if you so wish.

‘I like how the doorbins are a much lighter colour inside than the rest of the interior trim, because it makes it far easier to see various items inside.

‘The touchscreen is excellent. It’s mounted higher up than in my car, meaning I have to look down from the road for too long to do simple things such as changing the air conditioning. Now, I can just glance.

‘I’m quite pleased that the radio is now DAB, which it wasn’t before. Now I can listen to the cricket with complete clarity – it’s on AM, so it’s quite poor quality in my car.

‘The Apple CarPlay mirroring function is very useful. I currently use Bluetooth, but being able to use my iPhone through car’s touchscreen is much better, and I would also be able to use it as a sat-nav.

'I like this car so much that I've actually now ordered one.' 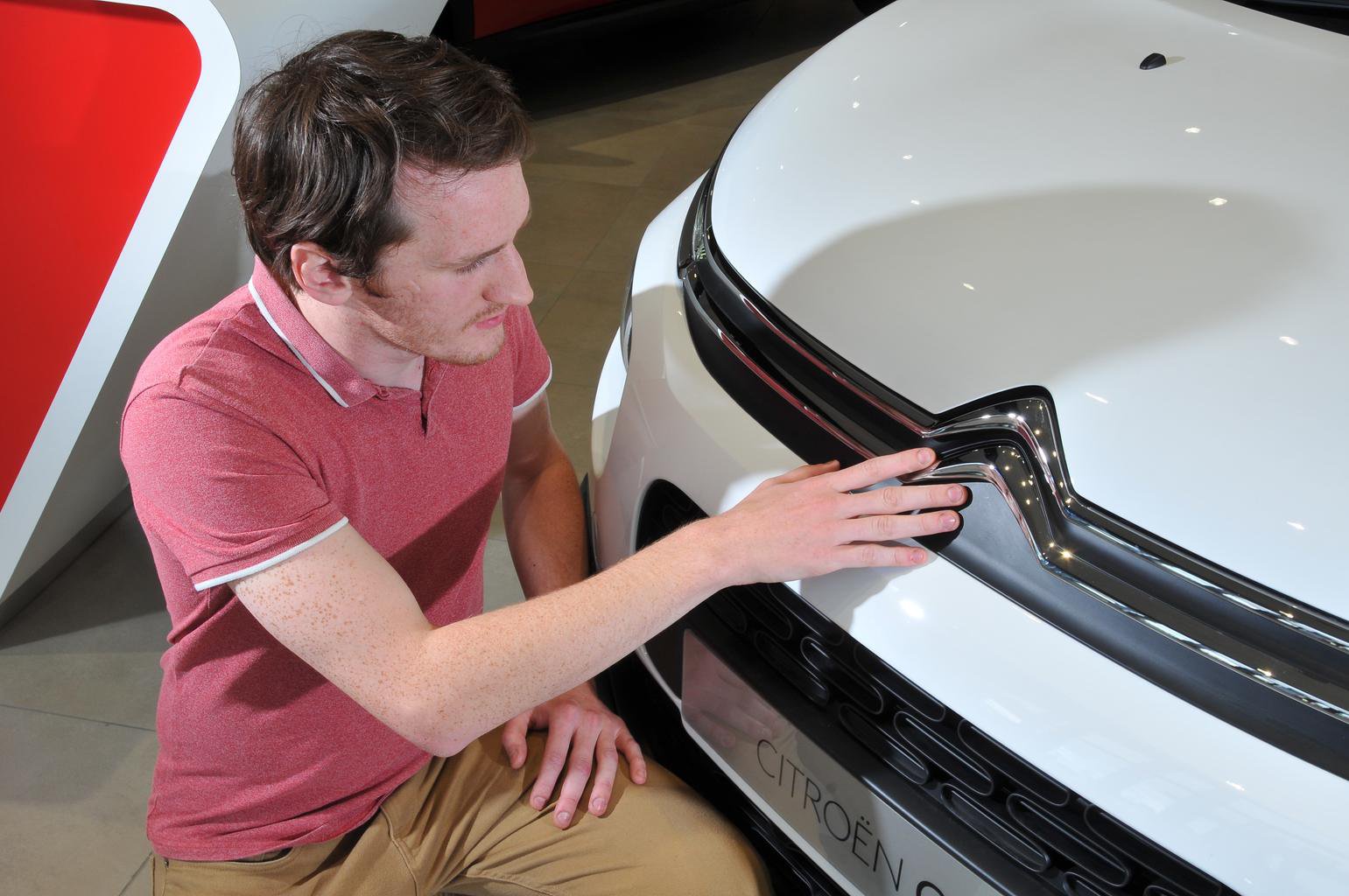 ‘I’m very impressed with this car. My wife recently bought a DS 3, but I reckon she would have got this C3 if it had come out six months ago, because it usefully has five doors rather than three.

‘For build quality and looks, inside and out, there’s such a positive difference to the old model. It’s a much meaner looking car, and I think it will be far more appealing to young lads now.

'There's a camera in the rear-view mirror, and you just press a button to take a photo. It's awesome – I often see classic cars when I'm driving that I'd like to take a picture of, and with this I could do so.

‘I love the soft seats. In lots of modern cars, such as the Volkswagen Golf or Ford Fiesta, for example – it’s like sitting on a park bench, because the public demands ‘sport’. However, there is a big market for comfort.

‘Head room is very good in the back, although leg room isn’t quite as good. I think the C3 will commonly be peoples’ second car, though, and for that it gives the best of both worlds. It’s small, so good for me on my own, but then spacious enough to pick up my grandchildren.

‘I wish they would bring out a GT hot hatch version like they used to do in the old days, especially with Citroën going back into rallying this year with a modified version of this car.’

Deals: save thousands on Audis