The Peugeot 5008 is our large SUV champion as a new car, but is it still a compelling purchase when you can have a used Range Rover Sport for the same money?... 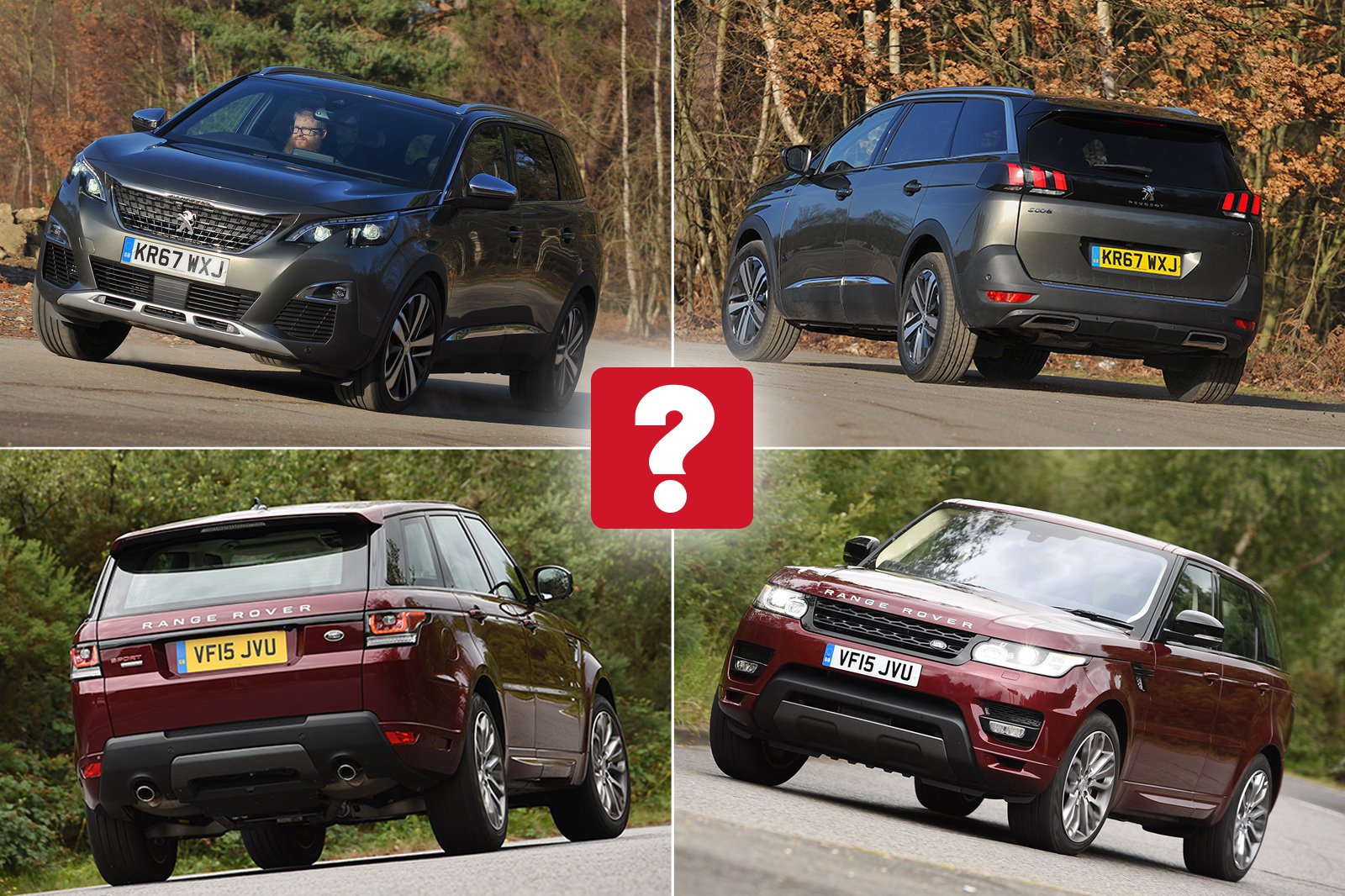 Buyers of seven-seat large SUVs are spoilt for choice these days, and reasonably priced PCP deals often allow you to plump for higher-spec versions than you otherwise might have. So, if you're planning on going for our large SUV of the year for 2020 – the Peugeot 5008 – you could be tempted to upgrade from our favourite PureTech 130 Allure version to the more luxurious 2.0 BlueHDi 180 GT instead for a slightly higher monthly payment.

But hang on, because there's always the used option to consider, and one of the most desirable premium SUVs is the Range Rover Sport. When it arrived, it was praised for being the best of its kind, blending the cosseting interior of the more expensive Range Rover with the dynamic handling associated with something far smaller, as well as offering the option of seven seats. For similar money to a brand new 5008 GT, you can get a well specified HSE model with the most potent 3.0 V6 diesel engine.

So the question is, are you better off going for a full-blown luxury SUV if you want to live the high life, or can you get the same sort of thing by choosing the new and more efficient option? Let's find out.

*Price today is based on a 2017 model with average mileage and full service history according to the What Car? Valuation service, correct at time of writing

The 5008 was rightly praised when it was launched for its superb interior. Even three years on, getting into one still provides a similar wow factor, and in top-tier GT form, you get diamond-stitched leather on the seats; wood grain across the dashboard and a large 12.3in digital display in place of regular analogue dials.

Cast your eyes lower and you will find some hard and scratchy plastics, but on the whole, these don't detract too much from the visual appeal. Less good is the lagginess of its 8.0in infotainment screen; it wouldn't be so much of an issue if the screen didn't also control frequently used functions such as climate control.

The inclusion of Apple CarPlay and Android Auto smartphone connectivity puts the 5008 at an advantage over the Sport, though, which has to make do with Bluetooth or Land Rover's own InControl app for access to a limited number of smartphone apps.

You'll find that the two cars are well matched in terms of equipment, with just the odd difference here and there. Both have dual-zone climate control, sat-nav, front and rear parking sensors, heated seats (also in the warmed in the rear of the Sport) and cruise control. The 5008 adds adaptive cruise control, brighter LED headlights and an electric tailgate and, while it doesn't have electric adjustment or memory for the passenger seat, you do get a massage function on the driver's side.

For the most part, the infotainment system is easy enough to use, but we'd suggest you try and find a Range Rover Sport with the upgraded InControl Touch Pro system because it adds a larger and quicker-responding screen, as well as a more sophisticated sat-nav system, an uprated stereo and a hard drive to store your music on.

Climb aboard a Sport and you'll be treated to a dashboard that's just as plush as you'll find on a more expensive Range Rover, with leather (or perhaps a very good imitation of it) across most of the surfaces, along with some fine metal inlays. The only let down is that some of the controls, such as the indicator and wiper stalks, are a bit plasticky, but then the same can be said of the 5008's, which are the same as are used in the Peugeot Rifter van.

That the Range Rover Sport is the most imposing car is here is not due simply to its styling; it's actually physically longer, wider and taller. However, in most interior measurements, the smaller 5008 is just as spacious, and in some instances, betters the Sport.

Of course, if all you're after is a commanding driving position, then the Sport is best. Compared with the bigger Range Rover, you sit lower in the Sport and you won't be able to look over the bonnet line, but there is still a good view out forward and to the side. Only the thick roof pillars obstruct your line of sight.

Sitting in the 5008, you'll notice that the dashboard is mounted fairly low, and this is by design. The aim of its layout is so that the instrument cluster is visible over the steering wheel and not through it as per the Sport. That wheel is also oddly small compared with the size of the car, and it takes a few minutes of getting used to.

Headroom is compromised in the 5008 because of the glass roof that's fitted to all GT-spec models. This is less of an issue for people over six foot tall in the front, but becomes more of an issue in the back, where taller people will have to cower slightly. That's a shame because the second row has three individual chairs that can be reclined and slid forwards and backwards to increase leg room, to such an extent that you'll find more knee room compared with the Sport.

The flexible second row also pays dividends for anyone wishing to use the third row, because more considerate passengers can donate some leg room to those in the rearmost seats. That feature isn't offered by the Sport, and this is a major issue because there's very little foot room back there, and anyone sitting in these seats will have to bend their knees uncomfortably to fit.

Boot space, too, is much better in the 5008 not only because it having a more capacious rear end with the third row folded down, but also because its floor is lower which makes putting things in much easier, plus you shouldn't need to clamber into the boot to reach items that have rolled up to the seats in the second row. We could fit a total of 10 carry-on suitcases in the 5008, while the Sport could only manage seven.