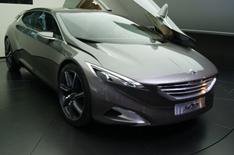 The Peugeot HX1 concept car is the star of Peugeots display at the Frankfurt motor show next month.

The futuristic MPV concept car has seating for up to six and a range of high-tech features, including a diesel-electric hybrid powertrain, half-scissor doors and spoilers that automatically deploy at higher speeds.

At 4.95 metres long, the HX1 is 13.5cm longer than a Ford Galaxy, yet its 3cm lower than a Mini. There are four reverse-opening side doors, that open upwards.

The HX1 includes active aerodynamic features the spokes in each wheel open at speed to create a flat surface. A spoiler and two side skirts at the top of the tailgate are deployed above 62mph.

Although many of the HX1s styling elements arent suitable for production, the front end shows the latest evolution of Peugeots new family look, with a front grille that appears detached from the bodywork.

The interior has seating in three rows of two, with the middle pair pulling out when needed. Theres also a minibar and a coffee machine, while materials such as stitched leather and brushed metal create a luxurious ambience.

Power comes from a 295bhp version of the Hybrid4 system thats used for the 3008 Hybrid4 and 508 RXH. In this case, a 2.2-litre diesel engine powers the front wheels, while a 94bhp electric motor drives the rear pair.

A production version of the HX1 is unlikely, but you can expect it to influence the styling and technology used for future Peugeot models.