You might be suspicious that the entry-level 129bhp 1.2-litre engine (badged Puretech 130) is too small to adequately power a seven-seat SUV. Well, you can relax; it’s eager to rev and packs enough punch for most people's performance needs. It takes 11.4sec to get from 0-62mph, but with plentiful low-down shove it feels far stronger on the road than the numbers suggest. With that in mind, it’s our pick of the range.

You can have a Puretech 130 with a six-speed manual or an eight-speed automatic gearbox, while the more powerful 179bhp 1.6-litre petrol (Puretech 180) comes as an auto only. The Puretech 180 is unsurprisingly a fair bit brisker, managing 0-62mph in 9.4sec, but it’s only available with the pricier trim levels.

A couple of diesels are also available. The 129bhp 1.5 (BlueHDi 130) is the best of these because, while it isn't flat-out fast, it's strong enough in its mid-range to haul you along easily. It’s also available with a choice of manual or automatic gearbox, while the 175bhp diesel – badged 2.0 BlueHDi 180 – is automatic only. That engine makes the 5008 brisker, 0-62mph taking 10.3sec, but only really makes sense if you regularly have a full car or tow something heavy. It’s worth pointing out that you can get versions of the Skoda Kodiaq and Seat Tarraco that are stronger still, however.

The relatively softly sprung 5008 proves itself to be one of the most comfortable cars in the class, especially if you stick to 17 or 18in alloy wheels. It has more 'give' over all but the roughest urban roads than the ever-jiggly Nissan X-Trail, only thumping when you encounter a particularly gargantuan pothole.

It's also far calmer at motorway speeds than the stiffly sprung Seat Tarraco, and even has the edge over the generally comfy Skoda Kodiaq. That makes the 5008 a very restful long-distance machine. Only the Citroën C5 Aircross betters it for high-speed waft, unless you start looking at more expensive premium models, such as the Audi Q5.

We mentioned sticking to smaller wheels because the 19in wheels can induce a harder edge to the ride. If you're thinking of one of the higher-spec trims, which come with 19in wheels as standard, it's worth trying before buying. 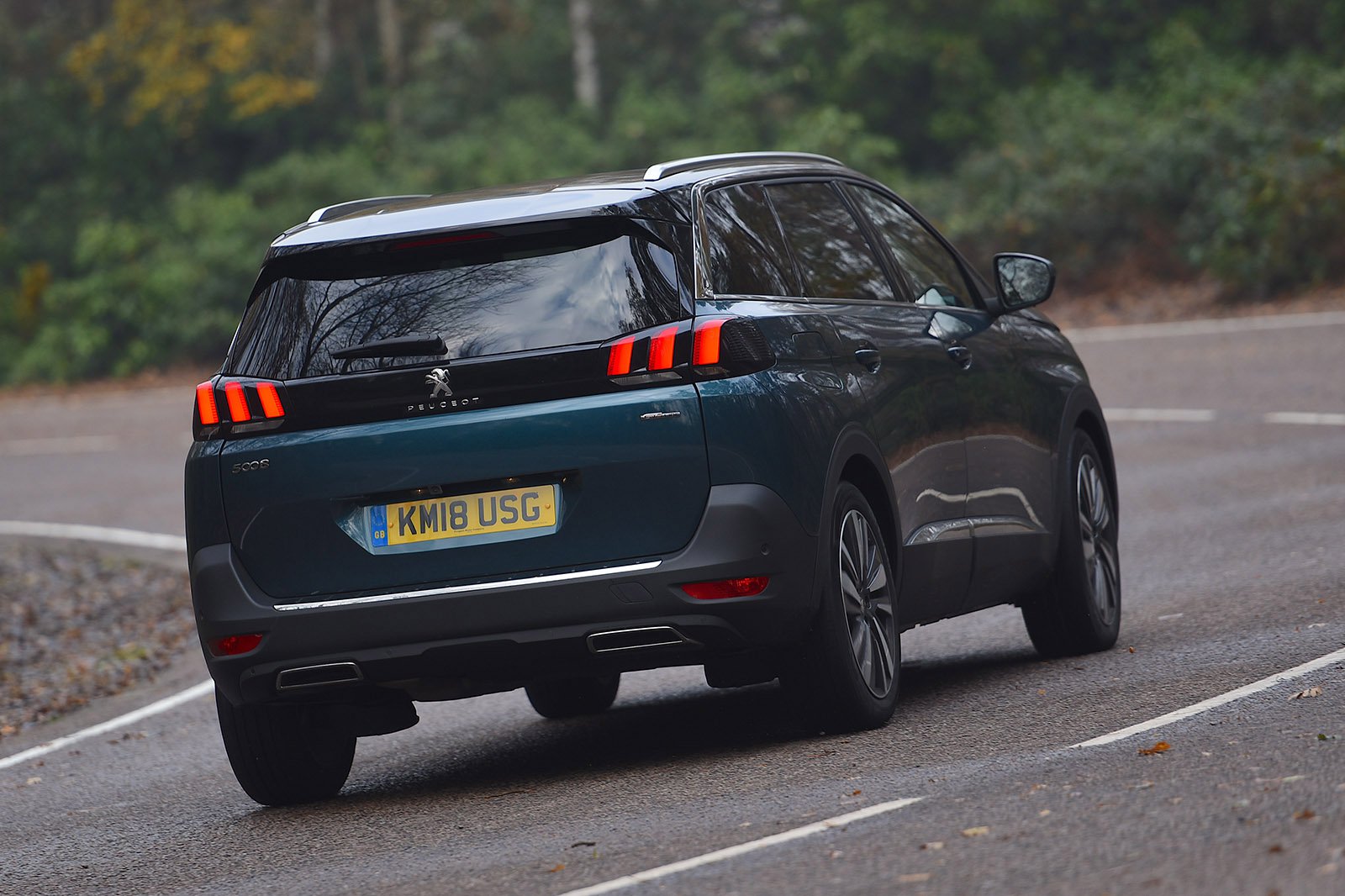 The tiny steering wheel you can see in the pictures comes courtesy of Peugeot’s i-Cockpit design (you'll find more about this in the driving position section). It gives the 5008 accurate but fairly quick steering that needs a bit of getting used to when placing the car in corners. When you're parking and want to add lots of lock quickly, that extra steering speed becomes a boon.

Ultimately, the Volkswagen Tiguan Allspace steers a little more fluently and, like the Seat Tarraco and Skoda Kodiaq, offers better body control and grip than the 5008. But buyers of large SUVs tend not to be especially concerned about ultimate handling, and if that's you then fear not: the 5008 will prove easy to drive, capable and surefooted.

One thing that's worth noting if you live deep in the countryside or are likely to need to go off road is that there's no four-wheel-drive option. Instead, you can add something called Grip Control; this is an electronic traction control system that includes hill descent control and works in conjunction with special mud and snow tyres. It lends a hand in slippery conditions but won't match the extra traction of four-wheel drive if the going really gets tough. Four-wheel drive is available on its Kodiaq and X-Trail rivals.

At motorway speeds, the 5008 is enjoyably quiet. It produces less wind noise than the Kodiaq and less road roar than the X-Trail. Only when you hit a really worn, coarse section of asphalt do the tyres emit a noticeable drone; the 19in wheels are worse for this than the smaller wheel options.

The 1.2 Puretech 130 is very smooth and thrums away mildly in the background, while the 1.6 Puretech 180 is noisier but not rough. The 1.5 BlueHDi diesel is also perfectly acceptable, producing just a bit of grumble when cold and the odd vibration through the controls, while the 2.0 diesel is, relatively speaking, rather serene. In fact, it’s one of the quietest diesels in the class, falling behind only the much pricier Audi Q5.

On all versions, the brakes are a little grabby in stop-start traffic and the springy clutch and vague gearlever action of the manuals is less than is ideal. The Kodiaq and Tarraco are much better in this respect. The automatic gearbox is pretty good, changing smoothly most of the time, but it can be a little abrupt at parking speeds. This is most apparent with the 1.5 BlueHDi engine. None of these weaknesses make the 5008 unpleasant to interact with – just not quite as well-mannered as those of the Kodiaq.

Comfortable, refined and with a spacious interior