There’s plenty of leg room in the front of the Peugeot 5008, and although there’s not as much head room as there is in the Kia Sorento or Skoda Kodiaq, there's still plenty for taller folks. That changes if you order the panoramic sunroof, though, which limits head room so check before you buy. The interior is also wide enough to put a comfortable distance between you and your front passenger.

While you'll struggle to fit gloves into the glovebox, the rest of the storage options are plentiful and varied. There's a vast cavern beneath the front central armrest, and it's air-conditioned to keep your packed lunch chilled. You'll also find a couple of cupholders and a large tray for your mobile phone in the centre console. The door bins are massive and it's a nice touch that they’re carpeted inside, so any loose items won’t rattle around.

We mentioned the impact that the panoramic sunroof has on front head room when it's fitted, and that's even worse for anyone travelling in the middle row of seats. Yes it makes the interior light and airy if you’re a kid staring wistfully up at a blue sky above, but any 6ft-plus adult with their head wedged against the roof will be turning the air blue with frustration. Think extremely carefully about ordering it. Without it, head room is fine, although still not the best in class.

Leg room in the middle row is fine, though. The Sorento or Kodiaq have a bit more to spare, but the 5008 still has plenty of space for long legs, even when the front seats are slid way back. It's also one of the best large SUVs for seating three adults abreast in its middle row. Each person gets a comfortable individual chair that slides and reclines, and there’s a good amount of shoulder room for all. It also has a completely flat floor, so there’s no awkward hump for the middle passenger to straddle, as there is in nearly every rival including the Sorento, Kodiaq and Seat Tarraco.

Many large SUVs, such as the Citroën C5 Aircross and Mazda CX-5, only have a five-seat configuration, but the 5008 comes with a third row of fold-out seats as standard. They’re better suited to kids than they are taller adults, but a couple of 6ft passengers could possibly stomach them for a short trip, and it would be a preferable experience to being cooped up in the even tighter rearmost seats of a Kodiaq. If you regularly need more space then the Sorento's third row of seats will take adults more easily. 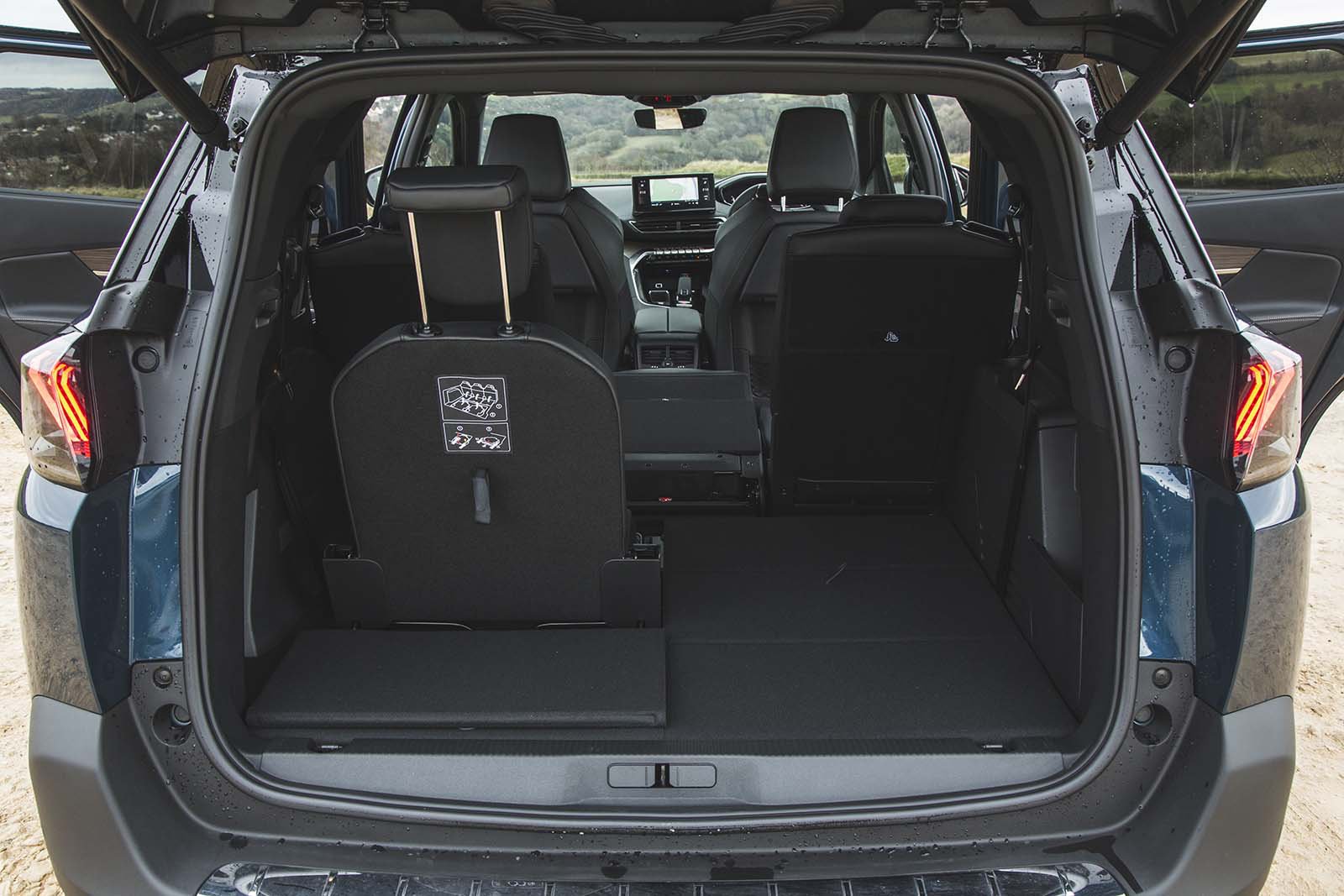 Front passengers get height adjustment as standard, but there's no option to add adjustable lumbar support or full electric adjustment to the passenger seat. Similarly, only the driver gets to enjoy the massage function on higher trim levels. Allure Premium trim and above add versatility with a front passenger seat that folds flat, freeing up the full length of the car – from boot to dashboard – if you need to carry a particularly long load.

As we mentioned previously, the three middle-row seats slide and recline individually and, because they fold in equal portions rather than in a 60/40 split, you have lots of flexibility for mixing longer loads with passengers.

Meanwhile, the third-row seats pull out manually. They’re very easy to erect or stow as and when required.

The boot is massive. We managed to fit in 10 carry-on cases with little effort; that's a match for the Sorento and Audi Q5 and betters many of the 5008’s nearest price rivals, such as the Kodiaq and CX-5. Its ability to swallow such big loads isn't just down to the sizeable floor area, but also its useful shape. The whole boot is square with no wheel arch intrusion, and it's really tall from floor to load cover. That doesn't mean it's high from the ground, though; the boot floor is relatively low set and ends flush with the tailgate opening, making it as easy as reasonably possible to get heavy loads in and out.

Because the rear seats slide forward, you can extend the boot space while maintaining three seats in the middle row. Or, if you don't need to carry passengers, they fold flat to give you a long, extended load bay that offers the carrying capacity of a small van. An electric tailgate, which you can open with a mere swipe of your foot below the rear bumper, is optional on most models and standard on top-end GT Premium trim.