You sit nice and high in the Skoda Kodiaq, looking down on folk in their conventional hatchbacks and smaller SUVs, such as the Audi Q2 and Seat Ateca. Pull up alongside a Range Rover, though, and you suddenly feel quite small.

The driving position is hard to fault; there's plenty of adjustment in the seat and steering wheel to set everything up just how you like it. The only slight disappointment is that adjustable lumbar support doesn’t feature as standard on the entry-level SE trim.

The Kodiaq’s dashboard is logically laid out and a doddle to use. There are plenty of big, clearly labelled buttons, such as those for the climate control, that you can hit easily on the move (in the Citroën C5 Aircross and Peugeot 5008 these functions are integrated annoyingly into the touchscreen) while the instrument dials are crystal-clear and legible at a glance. You can upgrade to digital dials that can be set up in various ways to show whatever information is most useful to you.

Because the Skoda Kodiaq is fairly boxy, it’s generally easy to see out of. Your view of the road ahead, and sideways when pulling out of junctions, is largely unobstructed, and even over-the-shoulder visibility isn’t too bad. The third row of seats (if fitted) get in the way a bit when in use, though.

Rear parking sensors come as standard on entry-level SE trim, and from SE Drive trim you get front parking sensors as well. SE Drive also adds a rear-view camera, which, oddly, isn't standard on some of the more expensive trims. A surround-view camera system, which displays a bird’s-eye view of the car on the touchscreen, is also available as an option. If you’re still nervous about parking, a semi-automated parking system, which takes care of the steering, is also available.

From SE L trim you get LED headlights that do a superb job of lighting your way at night and can adapt their light so they won’t dazzle oncoming drivers when you have full beam on. 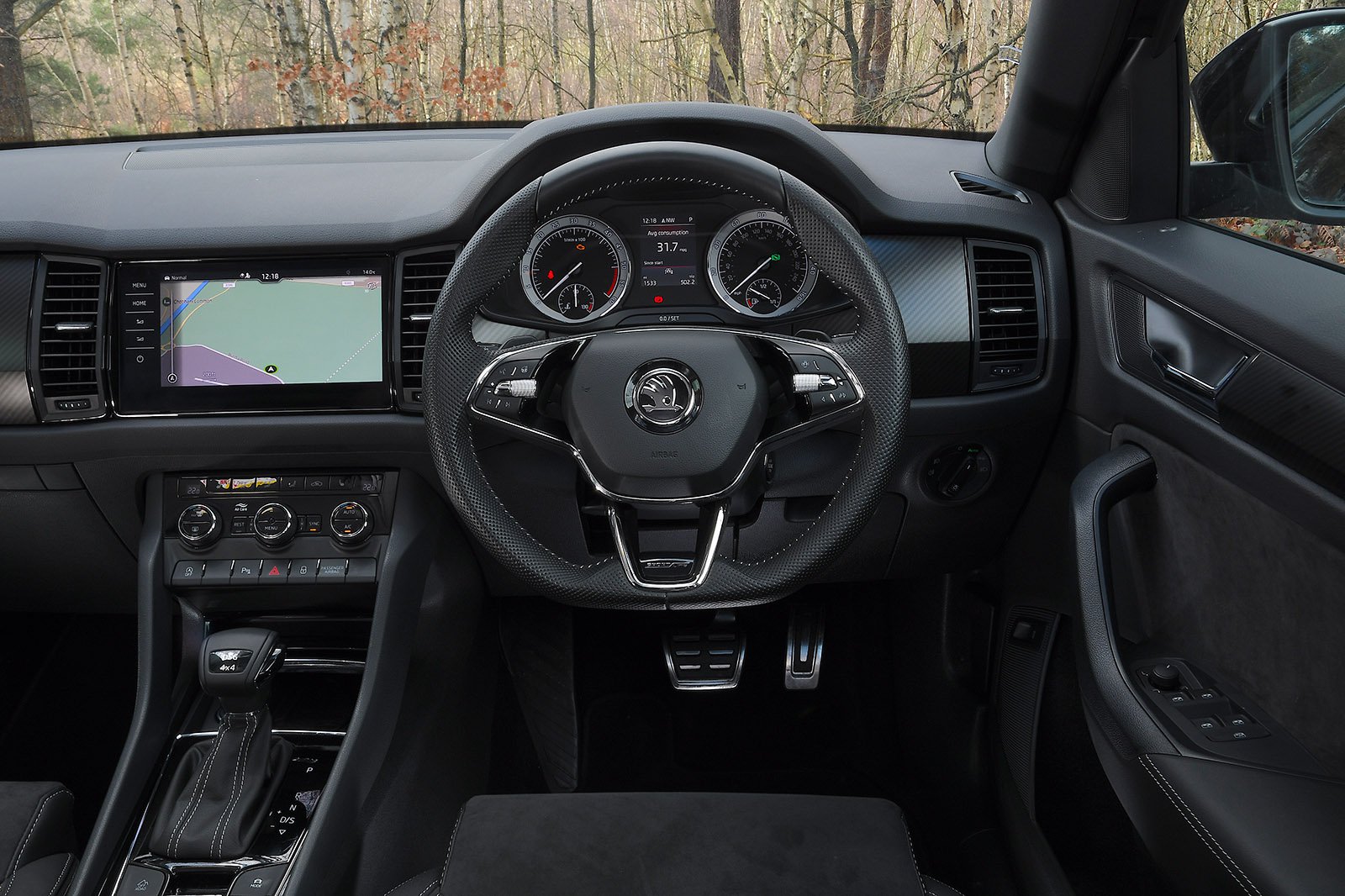 SE and SE Drive models get an 8.0in touchscreen as standard. It’s easier to operate than the Peugeot 5008's, thanks to it having clearer, more logical menus and barely any delay in its response to inputs. Gadgets such as a DAB radio, Bluetooth, USB sockets and smartphone mirroring (Apple CarPlay and Android Auto) also come as standard on all versions, while SE Drive trim adds built-in sat-nav.

From SE L trim you get a larger 9.2in touchscreen and on board wi-fi. The range-topping Laurin & Klement trim comes with a premium Canton stereo system, but wireless phone charging isn't available on the Kodiaq, unlike many of its rivals.

The Kodiaq’s interior is a smorgasbord of soft-touch materials and nicely damped buttons and switches; any harder plastics are kept well out of sight. It's right up there with the 5008 for quality and makes rivals such as the Nissan X-Trail and Ford Kuga feel decidedly low-rent. That said, premium large SUVs, such as the Audi Q5 and BMW X3, are even plusher.

All models get a leather-wrapped steering wheel that's a pleasure to hold. There are lots of fancy dashboard inserts available to jazz up the interior if you think the standard look is a little bland, while an optional interior light pack (standard on SE Drive) makes the Kodiaq feel that bit more special inside.