Not everybody wants a diesel engine these days, but the 148bhp 2.0 TDI 150 engine makes sense from a pure performance point of view. It's gutsy enough to haul up to seven people around with little drama and pulls effortlessly from low speeds, so joining fast-moving motorways is easy. If you plan on towing with your Kodiaq and don’t want to lose any performance, you can opt for the more powerful 197bhp 2.0 TDI 200. This will easily handle pulling a caravan up a steep hill, for example, and gives the Kodiaq a useful performance boost .

However, looking at the bigger picture, we think the 148bhp 1.5 TSI 150 petrol makes the most sense overall. True, it lacks the low to mid-range gutsiness of the diesel, but that's only a problem when the car's filled to the gunwales with people and luggage. On those occasions you will need to rev it harder, but the rest of the time it's absolutely fine and provides more poke than a Peugeot 5008 1.2 Puretech 130. And, as we'll discuss later on in the Costs section, it's a lot cheaper.

The 187bhp 2.0 TSI 190 petrol adds that missing bit of performance but ramps up the price as well as the running costs.

The Kodiaq’s ride isn't as pillowy soft as the five-seat only Citroën C5 Aircross, but the up side is that it doesn't sway about as much. It's far less jarring over bumps than the Nissan X-Trail, too. Indeed, if you resist the temptation to go for Sport Line models fitted as standard with 20in alloy wheels, you'll enjoy a generally comfortable ride. True, Peugeot 5008 is more cushioning over broken town roads than the Kodiaq, but when you find yourself on faster A-roads and motorways, the Skoda is all but a match for the Peugeot's relaxed gait.

The optional adaptive suspension, called Dynamic Chassis Control (DCC), is available on four-wheel drive models from SE L trim and above. It lets you stiffen or soften the ride at the touch of a button, but while it does improve the Kodiaq's ride in the softest setting, it's still not brilliant on patchy roads. And boy is it expensive, so we'd suggest it’s not worth the extra. 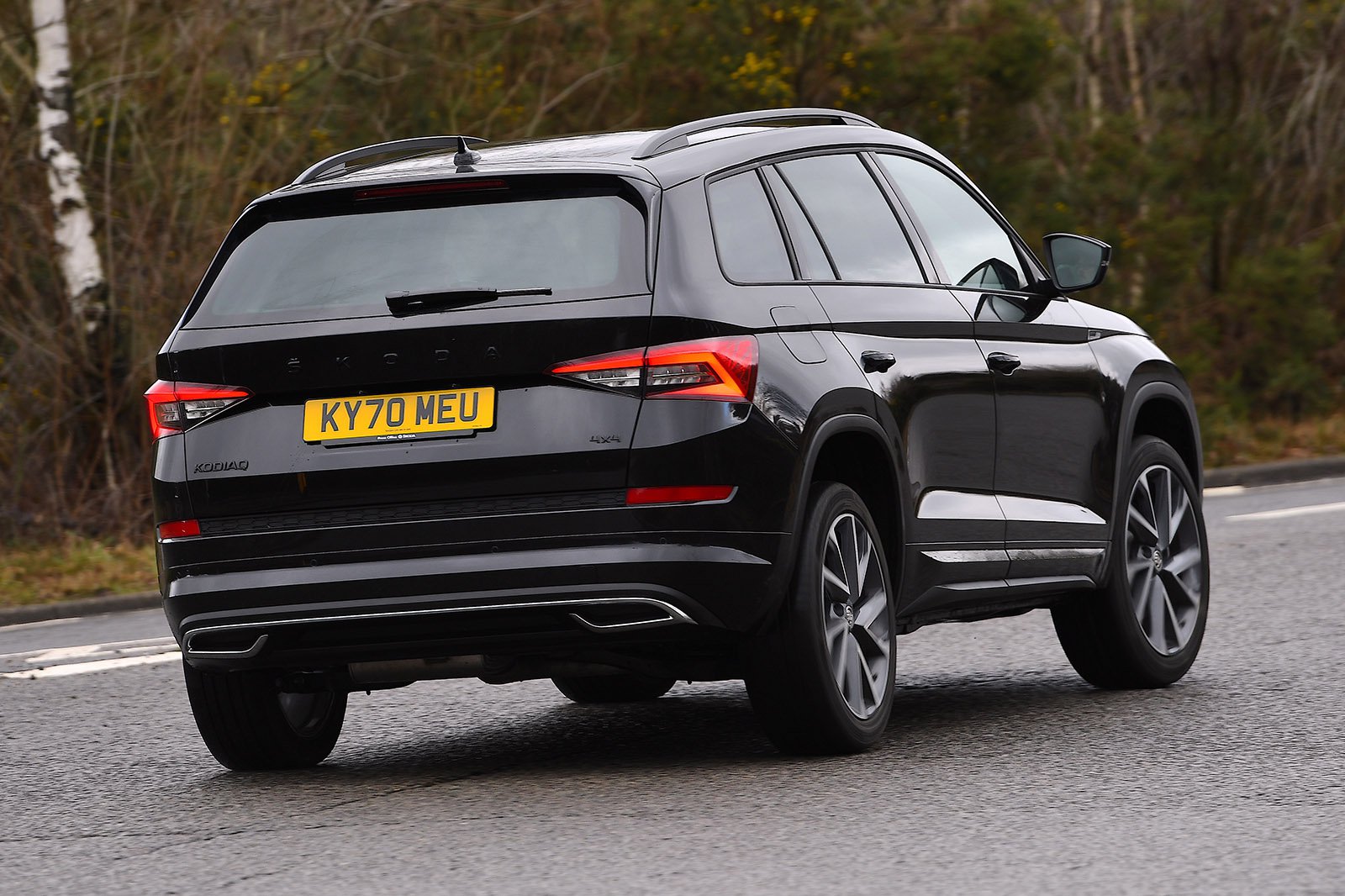 Large SUVs have a tendency to sway around quite a bit through corners, but less so the Skoda Kodiaq. Compared with rivals such as the C5 Aircross, X-Trail and Kia Sorento, it’s actually remarkably agile. Don’t expect it to scythe through bends like a Seat Ateca or an Audi Q2 (both are smaller, lower and lighter), but the Kodiaq remains fairly composed in fast direction changes and there’s plenty of grip. Four-wheel drive versions also add in more traction on slippier surfaces and some will find this an advantage over the front-wheel drive only 5008.

The only fly in the ointment is the Kodiaq’s steering. It's fine around town but too light when you get out of the city limits; you get a better sense of connection to the front wheels in a Mazda CX-5, Seat Tarraco or Volkswagen Tiguan. The Driving Mode Selection system (standard on SEL trim and above; optional on the cheaper trims) allows you to add much-needed weight to the steering with its Sport mode.

Better still is the Progressive Steering system that’s standard on Sport Line models and above, but optional on everything else. It reduces power assistance at higher speeds for a greater feeling of precision, but increases assistance and quickens the steering at low speeds to help when parking.

The 2.0 TDI 150 diesel engine is pleasantly muted, especially compared with the diesel units in the Sorento and X-Trail, but the TDI 200 sounds noisier when you put your foot down and continues to emit a constant grumbly hum at motorway cruising speed. The 1.5 and 2.0 TSI petrols are even smoother and quieter than the diesels, but sound more strained than an equivalent C5 Aircross or 5008 Puretech petrol when pushed.

You don’t feel many vibrations filtering into the interior with any of the engines, and there’s little in the way of road noise on the motorway. You will hear the wind whipping around the Kodiaq’s door mirrors, though.

The six-speed manual gearbox has a precise, satisfying action, and with its defined clutch bite and progressive brakes, it’s easy to drive the Kodiaq smoothly. Meanwhile, the optional seven-speed dual-clutch automatic gearbox is slick and swift to change on the move, but can be jerky at parking speeds.