You’ll find a good range of adjustment, in both reach and height, to the steering wheel and driver's seat, so you should be able to find a comfortable driving position. The only notable omission is lumbar adjustment. Top Ultimate Nav trim offers electric adjustment and even a driver’s seat massage function – a luxury feature that’s unusual in the small car class.

The air conditioning is controlled via physical buttons and knobs, making it less distracting to operate on the move than the 208’s system, which is controlled through the infotainment touchscreen. That said, the way the Corsa’s air-conditioning controls are recessed into the dashboard below the infotainment screen makes them less immediately visible than the Fiesta’s.

Analogue instrument dials come as standard, with a 3.5in screen set between them to display trip information. A 7.0in digital instrument display is provided from SRi trim and up.

All-round visibility from the Corsa’s driving seat is hampered by comparatively thick front and rear pillars; you have to pay for SE Premium trim or above for rear parking sensors to help with low-speed manoeuvring, or Elite Nav trim if you want front parking sensors and a rear-view camera. The Volkswagen Polo offers a better view out, both when looking forwards and backwards.

Every Corsa has bright LED headlights and daytime running lights, with SRi trim adding LED fog lights. Matrix adaptive LED headlights are available on higher trims (these can shape their light output to avoid dazzling other road users while full beam is selected – an impressive feature that’s rare in this class). 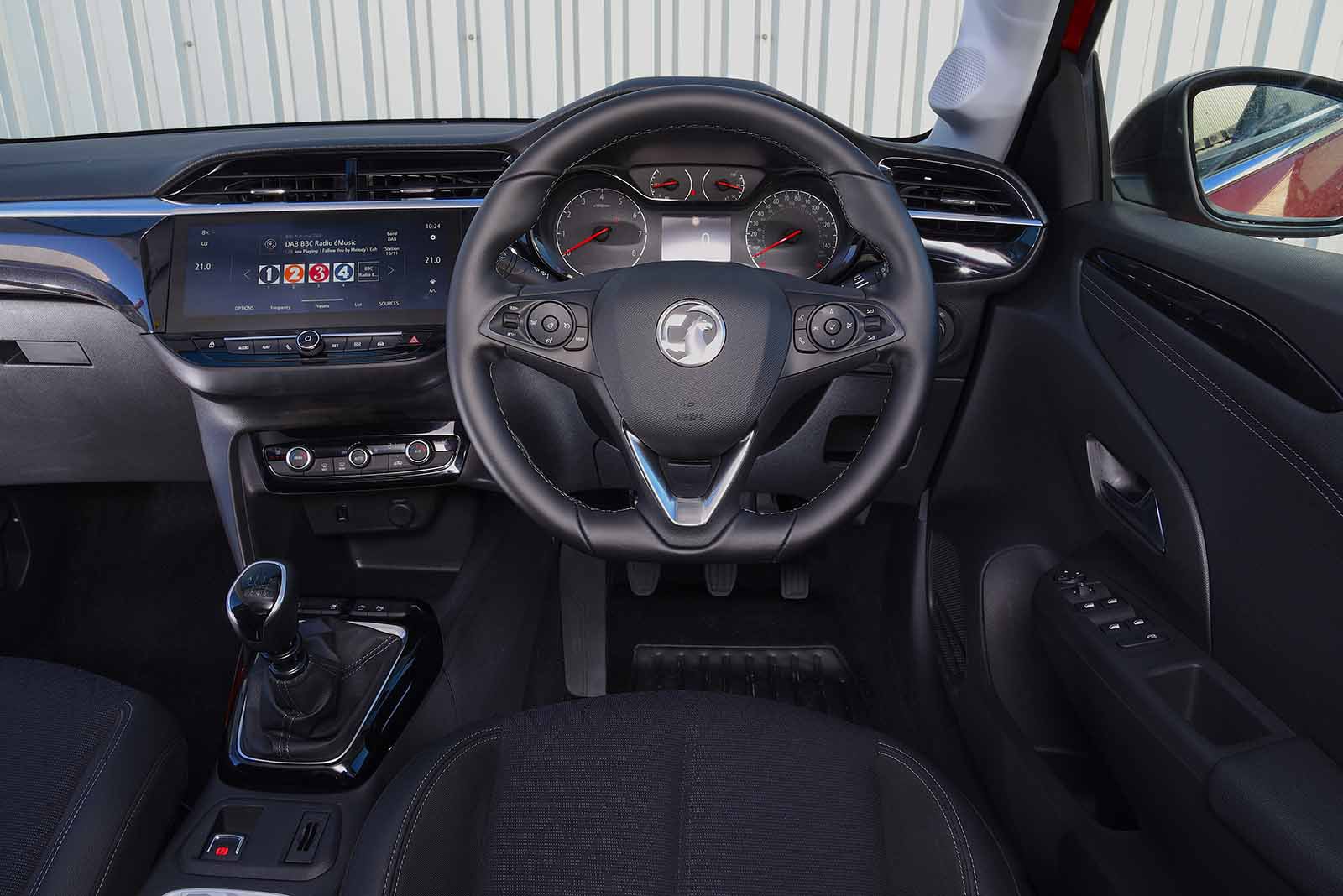 A 7.0in touchscreen infotainment system comes as standard with a DAB radio, Bluetooth, USB sockets and Apple CarPlay and Android Auto. The latter bypasses Vauxhall's own software and uses your smartphone's instead. That means you can use a number of its features, including Google Maps and Waze navigation apps, via the car’s screen, even on trim levels without in-built navigation. It's particularly handy because Vauxhall's infotainment software isn’t particularly responsive.

Its menu layouts are also a bit fiddly compared with those of the Polo and Ibiza, but the Corsa's system has a saving grace: it provides physical menu shortcut buttons and a volume knob. These make it less far distracting to use on the move than the touchscreen-only systems of some rivals, such as the Polo. Elite Nav Premium and above come with a larger 10.0in touchscreen, and wireless phone charging is an option on all models.

While the design of the Corsa’s interior may be about as bold and daring as a grey suit at a wedding, the nuts and bolts of it are pretty decent. Poke and prod around the dash and it all seems fairly well screwed together, and most of the materials are decent quality.

However, its buttons, switches and dials are a weak point, not feeling anywhere near as plush as the equivalents used in rivals such as the Polo. And it’s a real shame the interior seems so drab when you compare it with the far more stimulating design of the 208, which offers a real step up in perceived quality over the Corsa.