The great news is that we reckon the Volkswagen T-Roc's cheapest engine is the one to go for. It's a 1.0-litre, three-cylinder unit with 109bhp, badged the 1.0 TSI 110. It may be small but, thanks to a turbocharger, it packs a relatively mighty punch and delivers some welcome zip (0-62mph takes a healthy 10.8sec) when you rev it hard. And there's enough low-down shove to make it flexible, even at motorway speeds. Of its rivals, only the Ford Puma offers more oomph for the money.

If you fancy a bit more vim and vigour – or maybe you carry lots of passengers and luggage – it's well worth looking at the 148bhp, four-cylinder 1.5 TSI 150. This is noticeably quicker than the 1.0 TSI, cutting around two seconds off its 0-62mph time, while providing more overtaking opportunities with less stress and fewer gearchanges. Also, it brings the option of a seven-speed dual-clutch automatic gearbox. You can't have that with the 1.0 TSI 110.

The cheaper versions of the T-Roc – those that come with smaller wheels and higher-profile tyres – are supremely comfortable. Compared with other small SUVs, from the Audi Q2 and Mini Countryman to the Ford Puma and Seat Arona, they soak up the bumps better but aren't so soft – like the Citroën C3 Aircross – that they bounce you out of your seat along undulating roads.

Add the optional Dynamic Chassis Control and you can soften or firm up the ride to suit your mood (or the road you're driving down). However, the differences are subtle and the system isn't cheap, so we wouldn’t bother adding it. We’d also save a few more pounds by avoiding the pricier trims that come with bigger wheels, which make the ride knobblier. R-Line is definitely one to avoid if you value ride comfort, because that adds stiffer sports suspension. 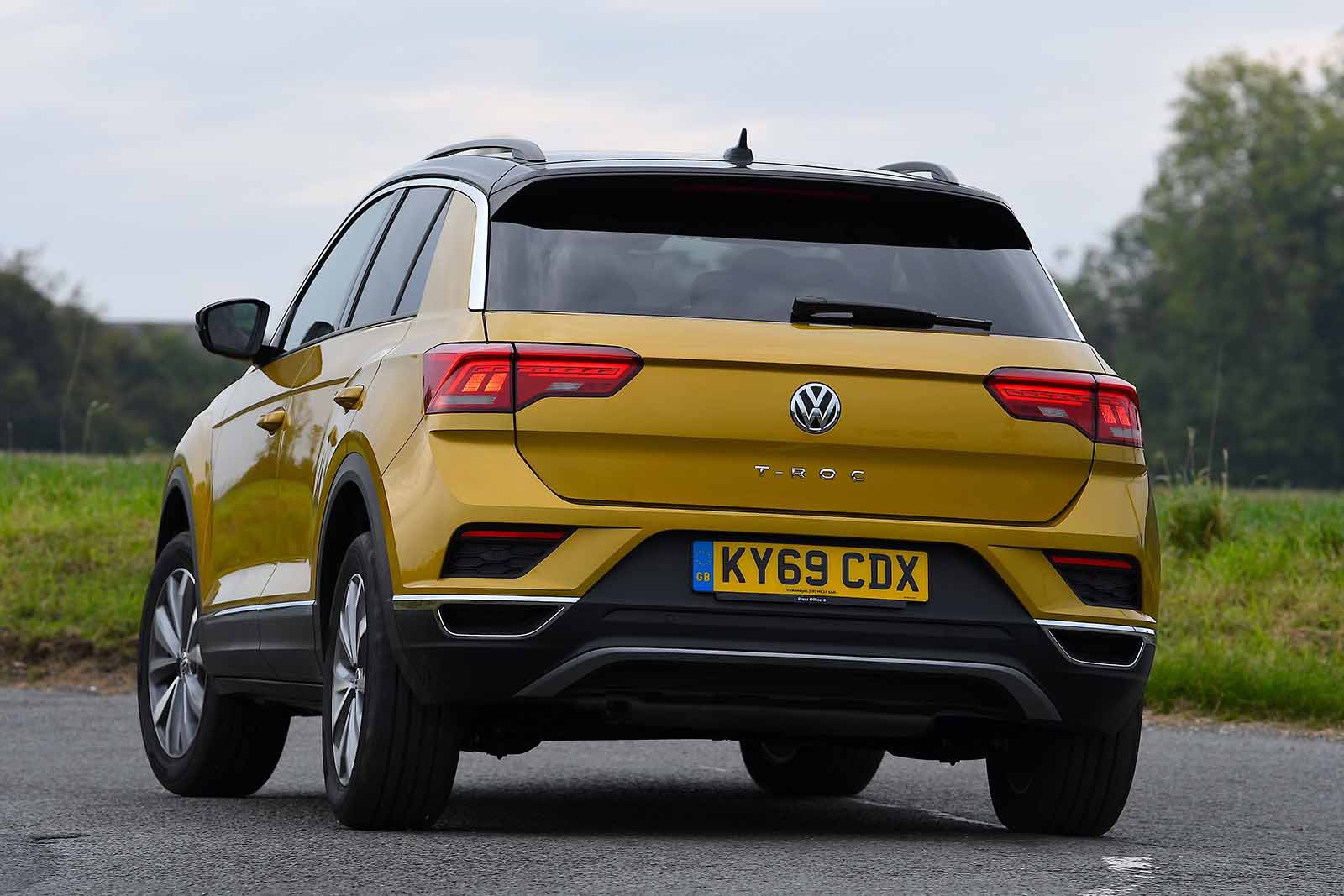 You rarely get something for nothing in this world and, sure enough, the price you pay for the T-Roc’s forgiving ride is more body lean through corners than you get with some of its rivals. Around town, that makes little difference; it's a light and easy car to drive through the cityscape. Even on open roads, the T-Roc is very reassuring; the well-weighted and responsive steering does your bidding and there's enough grip and balance for you to feel confident with what's underneath you.

It's simply that, compared with the Ford Puma, which is ultra-agile, responsive and genuinely enjoyable to drive, the T-Roc's comfort bias leaves it feeling just a wee bit off the pace. The stiffer R-Line version does sharpen it up, but it's still not a Puma beater.

From SEL trim up, there's a Driving Profile Selection switch that lets you alter the weight of the steering and the response of the accelerator. As with the optional Dynamic Chassis Control, it doesn't have a dramatic effect on the way the car behaves, so we wouldn’t recommend adding it as an option to the cheaper variants.

Our favourite engine, the 1.0 TSI 110, is quiet enough around town but gets a touch raspy when you pick up the pace and work it hard. The 1.5 TSI 150 is smoother and generally quieter, because it doesn't need to be revved as vigorously. The diesels produce a bit more rumble but aren't bad otherwise.

Opt for the manual gearbox and the lever is light and precise. Add to that an intuitive clutch that's easy to feed in and the T-Roc is no effort to drive smoothly through snarled-up traffic. That's helped by its progressive brakes, which make it dead easy to come to a controlled stop. The optional dual-clutch automatic gearbox can be a bit jerky in slow traffic or when trying to nudge into a parking spot, but it changes smoothly through the gears.

Once you're up to motorway speeds, you'll also find that the T-Roc does a fine job of isolating you from road and wind noise – better than all its rivals, as it happens – so if you value calm and relaxed progress, you'll like the T-Roc a lot.