Like rivals, the XC90 offers enough head and leg room to keep even tall adults very happy up front, and there’s also generous shoulder room, if not quite as much as you get in the Audi Q7 or Land Rover Defender.

Two large cupholders and a storage bin are positioned between the front seats. The two door pockets can each hold a large water bottle and still have space for other items. The glovebox is opened electronically and is large enough to store much more than just the car’s manual.

The back of the XC90 is well up to the challenge of accommodating taller passengers. Head room is ample on the second row on seats, and while the Q7 offers a whisker more leg room, the XC90 still offers more than rivals, including the Land Rover Discovery. It’s also roomy for three in the middle row, although the raised middle seat isn’t particularly comfortable to sit on for long periods of time; the wider and almost flat-floored Defender is a better bet. The optional panoramic roof eats into head room a bit, but you’d need to be seriously tall for it to be a problem.

All XC90s come with seven seats as standard. In fact, the T8 model is the only plug-in hybrid SUV to retain its third row of seats; its rivals have to go without, in order to make space for batteries. They've enough room for average-sized adults and children to be content, but anyone tall will find them rather tight on a long trip. If space for seven adults to travel together is a priority, look at the Discovery instead.

Storage space for those in the rear is good, with cupholders and useful cubbies dotted around. 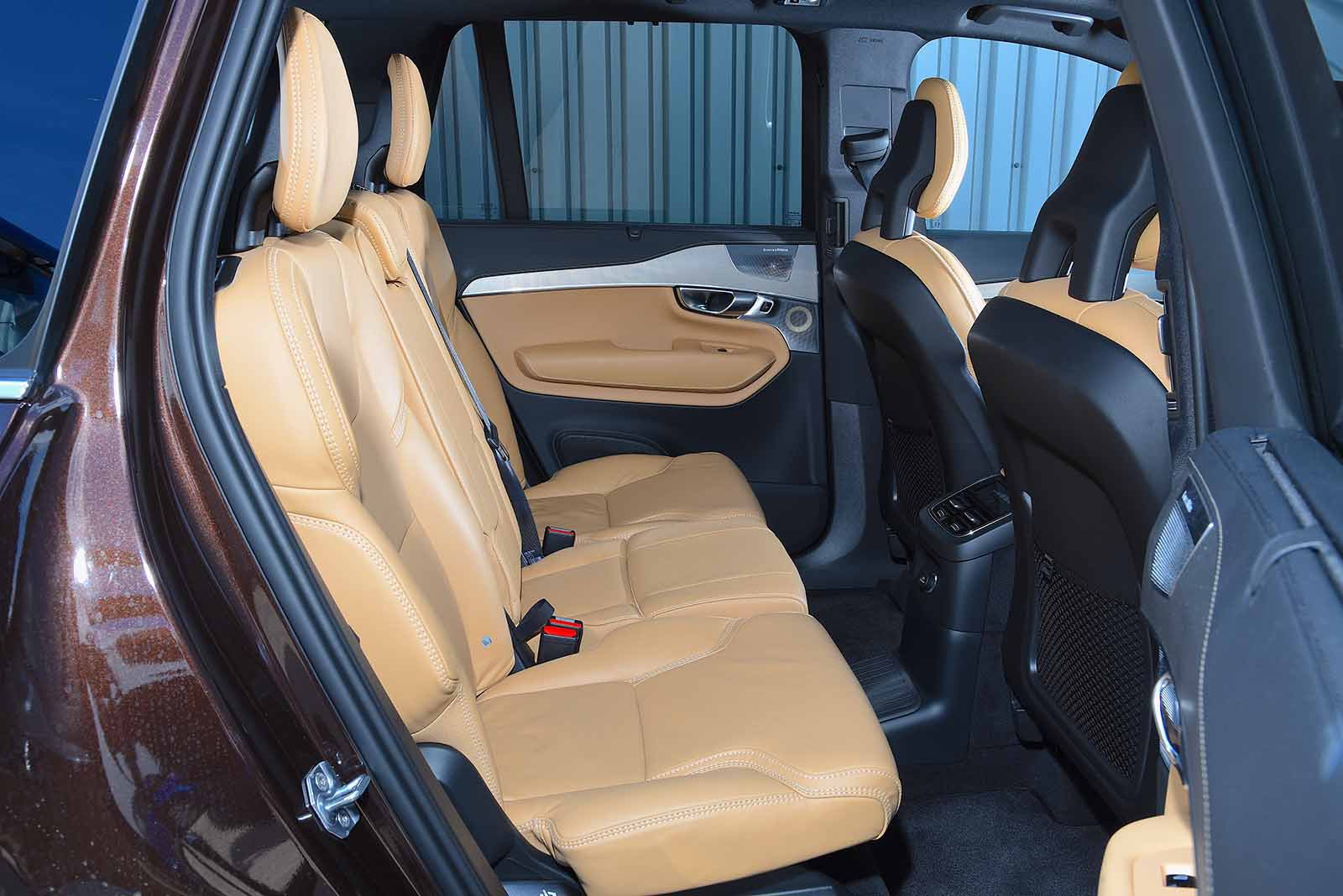 Unlike its competitors, including the Discovery and Q7, the third row of seats isn’t power-operated and has to be lifted manually; this is at least easy to do with one hand. When not in use, they lie flush with the boot floor.

Even with all seven seats in use, there’s room for a couple of large bags in the boot, plus some additional underfloor storage, which is more than you’ll get in a Discovery. With only five seats in place, the boot space swells to enable two large pushchairs, a couple of sets of golf clubs, three large suitcases or 10 carry-on suitcases to be carried with ease.

It’s not just a large space, though, it’s practical, too. As it’s one of the longest boots in the class, you are less likely to have to fold down the middle seats to carry lengthy items, and its relatively square shape, non-existent load lip and large aperture help when loading bulkier items. With air suspension fitted, it’s even possible to lower the rear end of the car by a few centimetres at the touch of a button, which makes lifting in heavy items slightly easier.

As with its hybrid rivals, the T8's bootspace is reduced slightly to help squeeze in a battery under its floor, but the remaining loadspace is nothing like as diminished as it is in a Porsche Cayenne or Range Rover Sport hybrid. In fact, the T8 can swallow far more luggage than either rival as you’re only actually losing underfloor storage space.