The entry-level diesel (the 148bhp 318d) has enough pull from low revs but, if your budget can stretch to it, we recommend the 187bhp 320d instead. Its extra muscle means you don't have to work it so hard, and its ultimate pace brings a swift 0-62mph sprint of 6.8sec – quicker than an Audi A4 40TDI. If you desire a diesel with the ability to worry hot hatches, there’s the 330d. Its 261bhp six-cylinder engine offers rapid acceleration; 0-62mph is dealt with in just 5.5sec.

If petrol is your cup of fossil fuel, the options start with the 318i, but we'd tip you in the direction of the excellent 181bhp 320i. It's perky enough for most situations, including overtaking on country roads, and its rev-happy nature sits well with the 3 Series' sporty character. For extra zip there's the more powerful 254bhp 330i, but our favourite engine of all is the 330e. This plug-in hybrid has similarly brisk performance to the 330i but adds a real-world electric-only range of around 25-30 miles.

What if straight-line performance is your main concern? Then check out the range-toppers, both of which have six-cylinder engines: the M340i petrol, with a salivating 369bhp that chops the 0-62mph sprint down to a blistering 4.4sec; or the grunty M340d diesel, which is only just behind on 4.6sec.

There are various suspension options for the 3 Series, and even the softest of them (fitted to SE and Sport trim versions) is set up more for poise and control than wafty comfort; you always feel more of bumps as they pass beneath the car than you do in the best versions of the Audi A4.

M Sport models, with stiffer suspension, are even firmer. The impacts over sharp imperfections are more pronounced, so be warned: sportiness really does take a higher priority than comfort.

Optional adaptive suspension is available to alleviate this, but it's pricey. It comes as part of the M Sport Pro Package (this is standard on M340i and M340d) and allows you to stiffen or soften the ride at the touch of the button. Select Comfort mode and the 3 Series is calmer around town than it is with either of the non-adaptive setups, and it's very smooth on A-roads and motorways. It's still not a match for the supple A4 if ride comfort is your top priority, though. 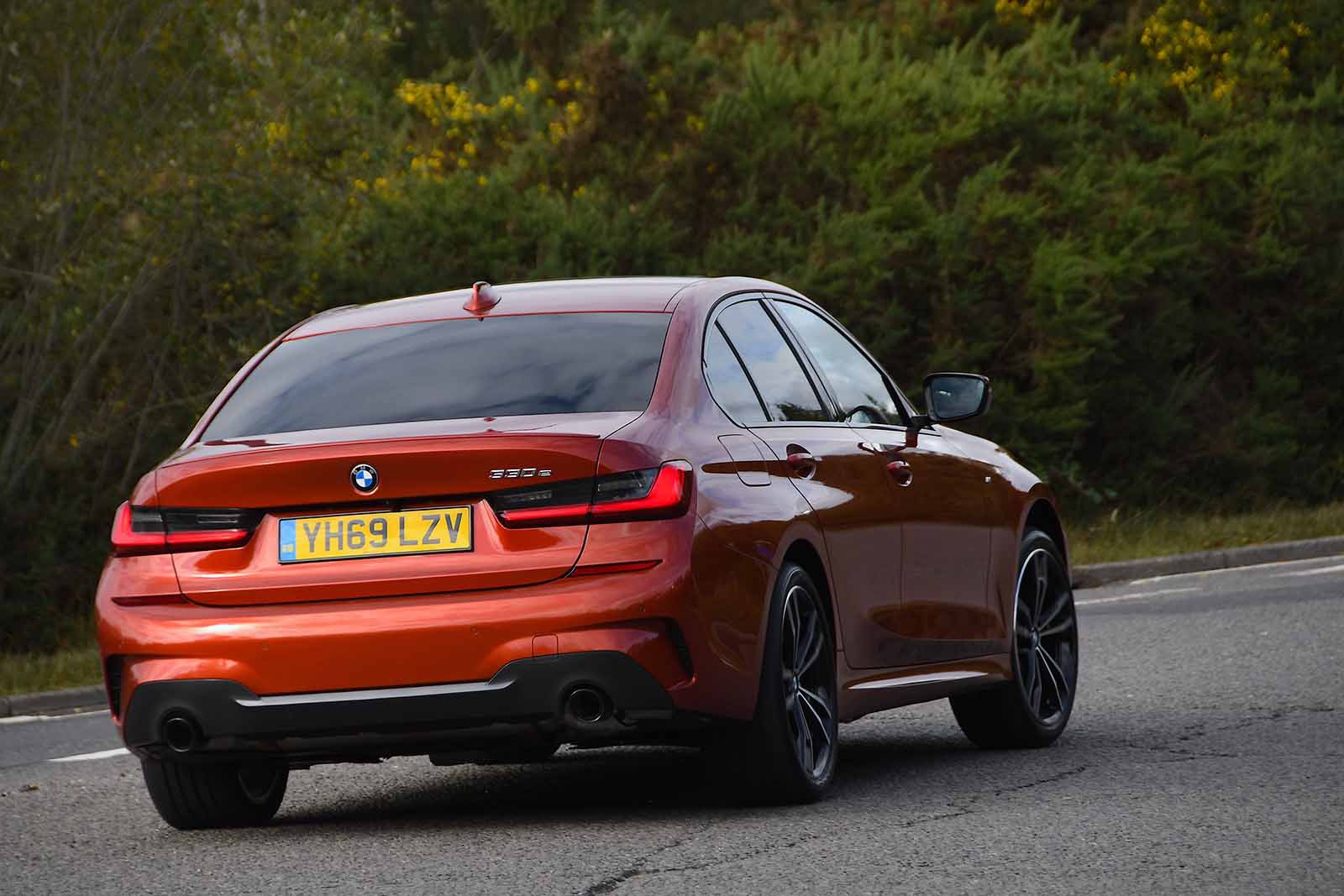 You won't be disappointed by the driving manners of any 3 Series, although the versions equipped with non-adjustable M Sport suspension possess the best cornering skills of all: simply beautiful stability and control through corners and across uneven roads. The optional adaptive M Suspension (standard on M340i and M340d) is ever so slightly behind in terms of absolute control, but is still very, very good.

The 3 Series' steering is another strength. True, it's not quite as feelsome as the Jaguar XE's, but being quicker, it's more reactive and always lets you know exactly how much grip is available. Once you've acclimatised to its immediate response, you find yourself placing the car's nose just where you want it.

The 330e plug-in hybrid is heavier than the rest of the range, so it's the least agile 3 Series. But it's still a very tidy handling car – much better than the Volvo S60 Recharge and by far the sportiest plug-in hybrid in the class.

There isn't much wind noise at motorway speeds, but road noise (especially on models with run-flat tyres) is slightly more pronounced than it is in many versions of the Audi A4 and Mercedes C-Class. Suspension noise – again, not helped by the stiffer sidewalls of the run-flat tyres – is also noticeable over bumps.

The six-cylinder engines (330d, M340d and M340i) sound sweet, while the less powerful four-cylinder petrols have a gruffer but still perfectly acceptable tone. The big-selling 320d diesel is also fine, but not quite as hushed as the equivalent A4 40 TDI.

The brake pedal is progressive on most of the 3 Series models, except the 330e plug-in hybrid. In the 330e it feels a bit weird because it activates a regenerative braking system that harvests energy to top up the battery. It's still more confidence-inspiring than the brakes of many other hybrid cars, though, while on the plus side, you get no engine noise when the 330e is running on electric power alone.