In the movies, sequels are rarely better than the original – but with the BMW M4 Competition performance car, the opposite is true.

The previous-generation M4 took BMW a number of revisions before it delivered the performance and handling it had originally promised, stretching the phrase "good things come to those who wait" to the limit. This current version got off to a much stronger start, though.

Is it up to the challenge? That's what we'll tell you over the next few pages of this review, as we rate its performance, handling, interior quality, running costs and more.

And don’t forget, even if you’re not in the market for a 180mph BMW M4, we can still save you a good few quid on your next new car if you use our free What Car? New Car Buying service. It's a good place to find the best new BMW deals.

Many modern performance cars give you some control over their set-up, whether that's the ability to change the firmness of the suspension or tinker with the weight of the steering. The BMW M4 Competition takes that to extremes, though – with a button actually marked 'Setup' next to the stubby gear selector.

With everything in Comfort mode (the most relaxed setting) the M4 makes a comfortable and refined daily companion. Its turbocharged six-cylinder engine remains hushed and flexible, its eight-speed automatic gearbox shuffles smoothly through the gears, and, with its standard adaptive suspension, it floats gently over the ups and downs of a subsiding B-road with just a little brittleness over any sharply calloused sections.

Body lean is kept well in check in this softest setting, but if you really want to push on, the mid-way Sport or firmer Sport Plus modes are better for making the most of country roads. Both options help to anchor the car, as well as giving the steering a little more heft, so you can gauge your inputs more accurately without it feeling unnaturally heavy.

The steering itself responds in a more natural way than the light and hyper-alert set-up of the Alfa Romeo Giulia Quadrifoglio and is far more engaging than the slower and numb-feeling system in the Audi RS5.

In other words, it’s a good compromise, and one that allows you to place the car on the road very precisely. And that’s handy, because when you deploy all 503bhp horses, the M4 fires you up the road in an almost alarming manner.

On a cold and damp day at our test track, the M4 managed to slingshot itself from 0-60mph in just 3.8 seconds – just a tenth of a second slower than a Giulia Quadrifoglio in dry conditions. It repeated that feat numerous times thanks to its consistently sharp eight-speed automatic gearbox.

When it comes to handling, the M4 takes a bit of time to learn. With so much front-end grip and rear-end traction, you have to chip away at the car’s limits before you feel truly confident to grab it by the scruff of the neck. Happily, once you get there, you’ll find it far more predictable than its predecessor.

When the rear wheels break traction in a corner, for example, the resulting slide is easy to manage because the differential locks up quickly and predictably. And, thanks to it’s clever 10-stage traction control system, you can fine-tune how much wheel-slip is allowed before the traction control cuts in. This is a big boon over the Giulia Quadrifoglio, in which the traction control has just two settings... On and Off.

The four-wheel-drive M xDrive model helps you deploy the M4’s power more effectively in less favourable conditions, adding an extra layer of reassurance when you’d prefer to maximise traction. Thankfully, the rear-biased system means it hasn’t neutralised the handling balance too much.

The 4WD Sport mode makes the M4 a little more playful, allowing the rear wheels to break traction when provoked and diverting less power to the front wheels. Alternatively, you can switch it to rear-wheel-drive only, although that will also turn off the stability systems.

We reckon the xDrive model is worth opting for if you plan to use the M4 all year round. It gives the car a dose of all-weather usability that makes the four-wheel-drive RS5 appealing to some buyers. The ability to dial down the system also allows you to have fun when conditions allow.

As standard, the M4 comes with steel M Compound brakes, and carbon-ceramic brakes are available as part of the M Pro Package. We’ve sampled the standard set-up, and while they can be a little grabby around town, we found them to be progressive, consistent and very powerful during spirited driving.

Indeed, the impressive performance of the standard brakes, combined with the predictability of the M4’s handling, allowed us to lap our test track (a 0.9-mile circuit designed to simulate a fast B-road) quicker than in any other performance car we’ve tested to date. Impressive.

Perhaps the only disappointment is the soundtrack that accompanies the M4's mighty engine. Sure, it’s loud and bassy and leaves you in no doubt that lots of power is being produced, but it's not the sort of evocative sound that you’ll find yourself accelerating hard just to listen to. 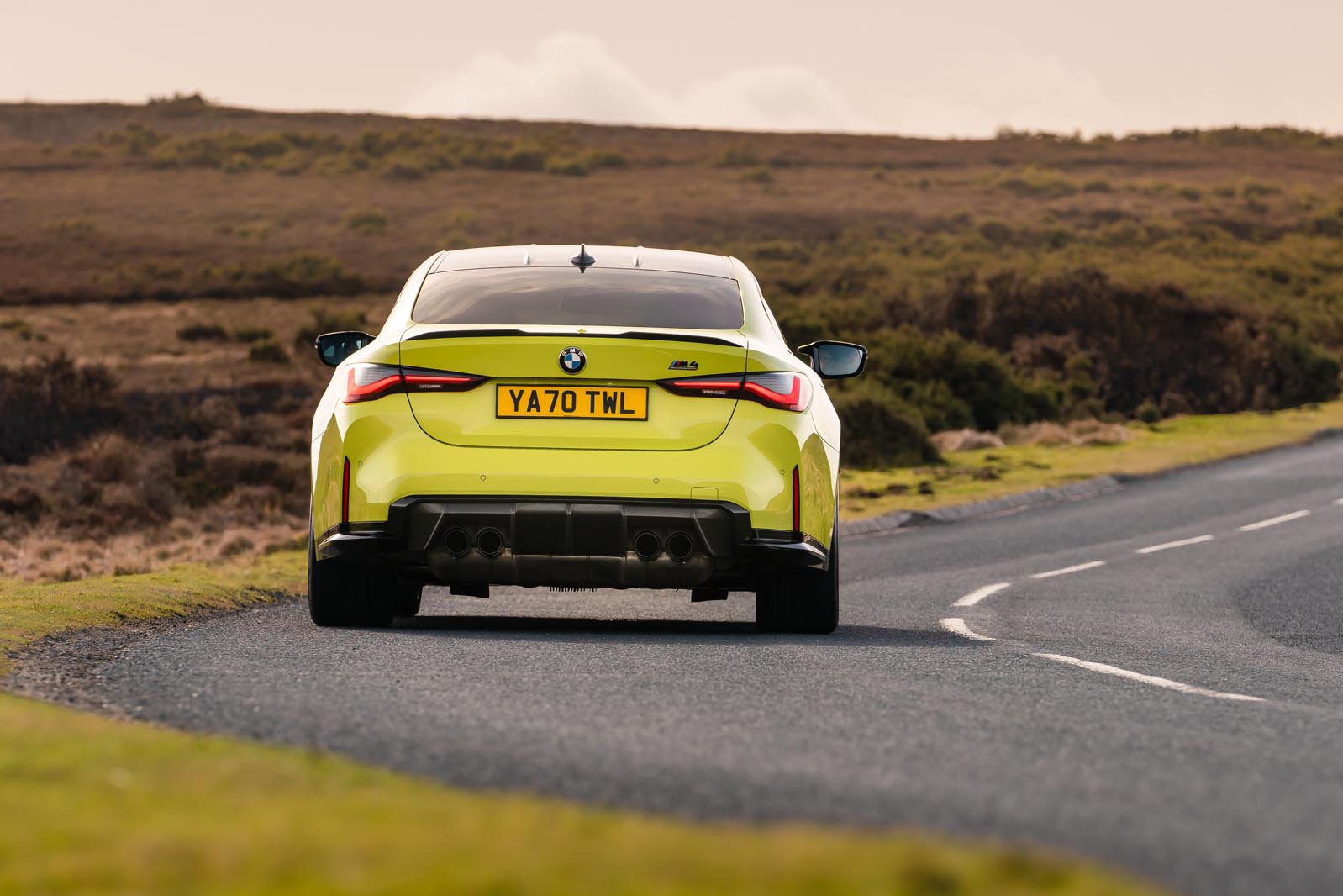