We rate the 123bhp 1.0 Ecoboost 125. Okay, it isn’t frisky enough to fry your adrenal glands (0-62mph comes along in 10.0sec) and the Volkswagen Golf 1.5 TSI 130 is punchier, but it has decent shove once the revs build past 2000rpm. There's a mild hybrid version, called the 1.0 Ecoboost Hybrid 125, which has a small electric motor to add a bit of extra oomph at low revs. The performance boost isn't that noticeable, but because there's not much of a cost premium and it's more efficient, we reckon it's the pick of the range.

If you regularly carry lots of people or simply want something quicker, there's the 153bhp version. It's called the 1.0 Ecoboost Hybrid 155 and, with 0-62mph in 9.2sec, it should be frisky enough for you.

Meanwhile, if you're a diesel fan, the 118bhp 1.5 Ecoblue 120 represents the sweet spot in the diesel range, providing a good spread of shove once you get past its initial low-end turbo lag. The 148bhp 2.0 Ecoblue 150 doesn't feel that much faster, especially if you order it with the optional eight-speed automatic gearbox. In fact, whichever engine you go for, the auto 'box takes the edge off the performance with its leisurely kickdown.

No matter which version you choose, the Focus is a slightly firmer-riding car than the Skoda Scala, Toyota Corolla and Volkswagen Golf. But fundamentally it's a comfortable thing, with more give in its springs than the Kia Ceed and Mazda 3.

Even the lower and stiffer ST-Line versions aren't bone-shakers; you just have to put up with their greater firmness over sharper bumps and potholes – especially the ST-Line X with its bigger, 18in wheels. Meanwhile, the SUV-inspired Active models ride 30mm higher than the standard versions, and that extra height creates a bit of side-to-side sway on any uneven surface. 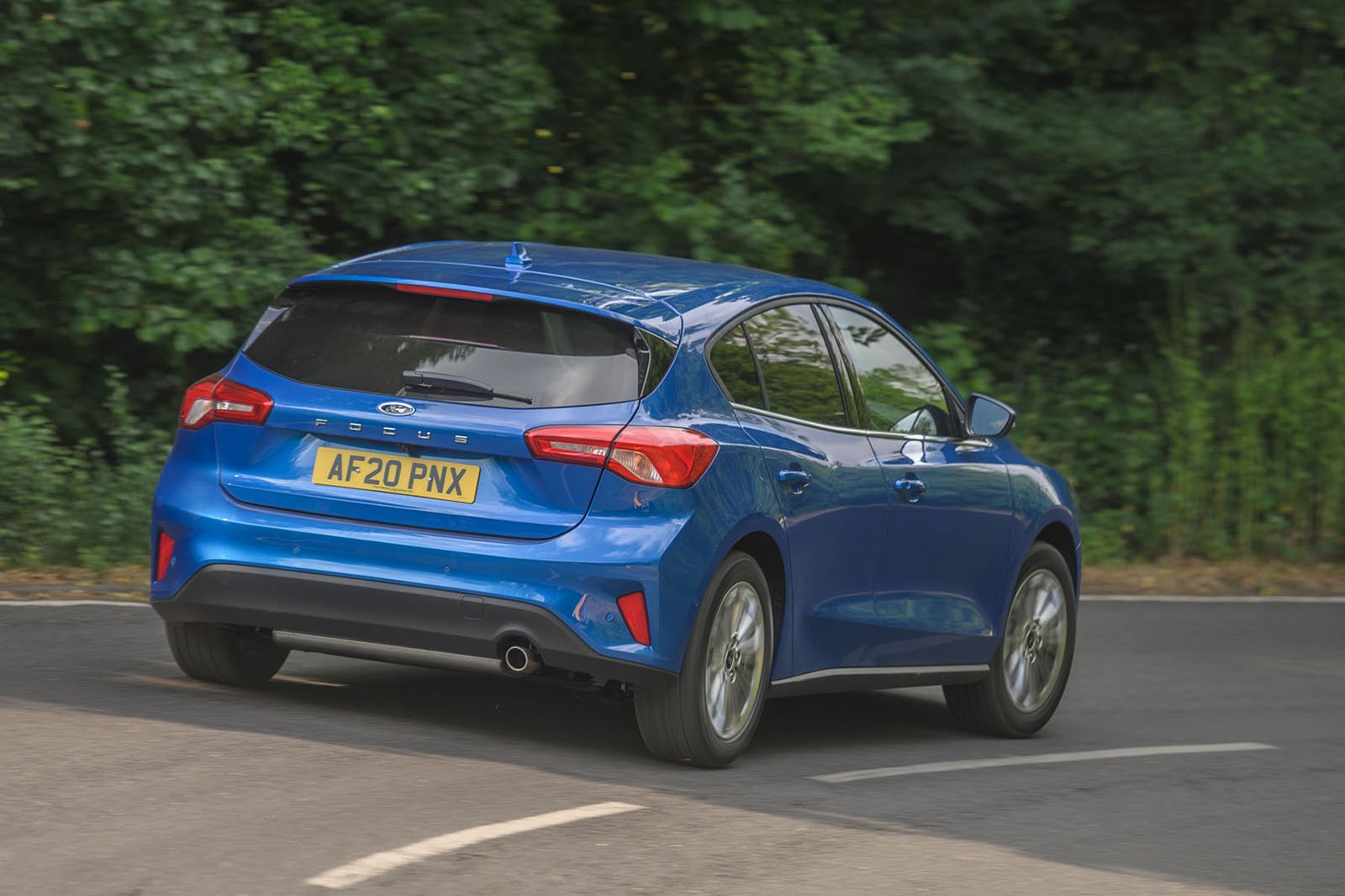 If you want the best-handling Focus, choose the ST-Line trim. With its lower, stiffer suspension, this exhibits the least body lean in corners and makes the most of the Focus's inherently playful cornering balance and agility. The Seat Leon (especially in its sportier FR trim) is the only car in the class (for similar money) that can offer keen drivers such thrills.

The less sporty trims (Zetec and Titanium, for example) are still more agile than the Skoda Octavia, but they lean more and lack the ST-Line's cornering sparkle. The jacked-up Active models add more body lean into the mix but are still tidy to drive by class standards.

All Focus models have quick steering. It's light in town but weights up at higher speeds – albeit with a slightly unnatural self-centring action. But it's feelsome and gives you a lot more information about how much grip is available than, say, the Volkswagen Golf's steering does.

The Focus's 1.0 Ecoboost petrol engines thrum away faintly in the background, but never annoyingly. They're generally quieter than the 1.0 TSI 110 and 1.5 TSI 130 engines that you'll find in the Seat Leon and Volkswagen Golf. The 1.5-litre Ecoblue 120 diesel is quite a bit grumblier than the petrols at low revs and booms when revved hard, but the 2.0 Ecoblue 150 is slightly quieter.

At motorway speeds, there’s some flutter from around the Focus's door mirrors, but road noise is very well suppressed. So, if you spend a lot of time travelling at speed, the Focus is the most civilised cruiser in the class and quieter than the Leon and Mazda 3. It even pips the Golf for peace and quiet.

Every Focus comes with a sweet-shifting six-speed manual gearbox, or there's the option of an eight-speed automatic on certain versions. Unfortunately, the auto 'box isn't very good, especially when hooked up to a diesel engine. It's jerky when you're manoeuvring into parking spaces and thuds before moving away in traffic. Stick with the manual, or, if you must have an automatic, there are better auto gearboxes in rivals such as the Octavia and Golf.