There aren’t any diesel engines for the Hyundai Tucson, just a range of 1.6-litre turbocharged petrols. The entry-level is the 148bhp 1.6 T-GDi 150, which comes with or without 48-volt mild hybrid technology (badged MHEV), which is designed to boost efficiency. With a manual gearbox, either version hits 0-62mph in 10.3sec, or slightly faster if you opt for the seven-speed dual-clutch auto ‘box. This pace is more than adequate, with that mild hybrid tech helping give a little boost at low revs, but the automatic gearbox needs a moment of thought before it gives you a decent slug of acceleration. There’s also a 178bhp T-GDi 180 48 Volt MHEV version, which comes with the auto ‘box and four-wheel drive as standard. Officially it’ll hit 0-62mph in 9.0sec flat.

The top engine is a full hybrid, the 227bhp 1.6 T-GDi 230 Hybrid. The battery is big enough for short bursts of leisurely electric driving in stop-start traffic, but doesn’t match the true electric range of a plug-in hybrid, like the Kia Niro PHEV, which will do around 30 miles.

With the petrol engine and electric motor combined it’s no slouch away from the lights and there’s plenty of useful pep for overtaking (0-62mph takes 8.0sec). There’s a small fly in the ointment, though: the six-speed dual-clutch automatic gearbox is hesitant, taking a moment to decide on a gear when you put your foot down.

Compared with rivals that have a bit of extra ‘give’ in their springs, such as the Skoda Karoq or Volvo XC40, the Tucson is more jarring over sharper callouses like potholes and ridges. It also tends to rock about over uneven surfaces. This is especially pronounced on the 19in alloy wheels you get with Ultimate trim, and on Premium trim with hybrid engines. All other engines get 18 wheels.

On the plus side, it rides over gentler undulations with reasonable aplomb and, overall, it’s not uncomfortable. Entry-level SE Connect models are the most pliant as they come with relatively small 17in wheels that benefit from plumper tyres, which help to round off sharper abrasions. 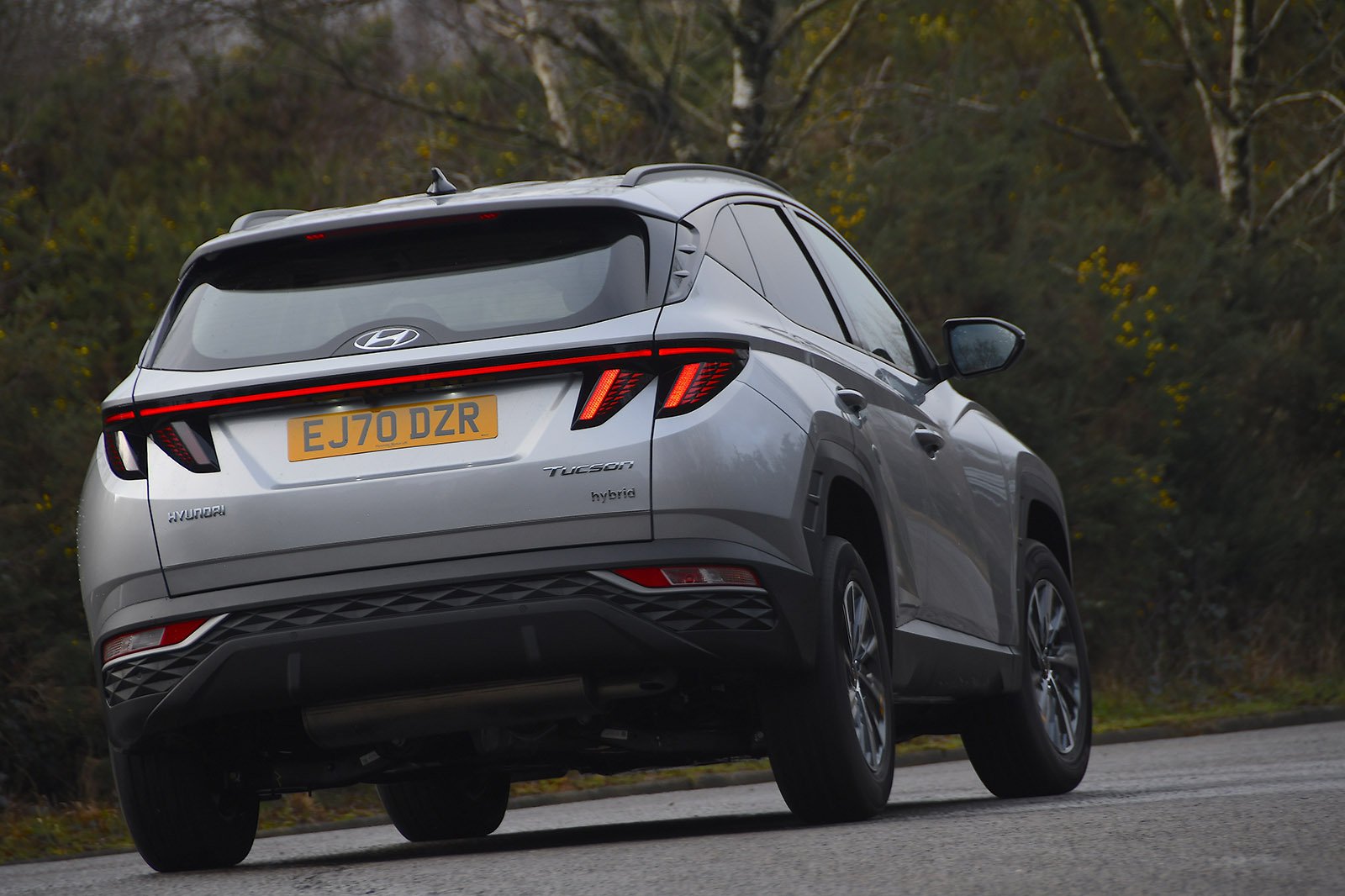 The light, quick steering creates an early sense that the Tucson will be a spry thing, but it’s not. When you’re driving sedately it flows along happily enough, but if you start pushing harder, the steering feels over-eager and you find yourself turning in to corners too aggressively.

Then there’s the balance of the grip between the Tucson’s front and rear wheels, which isn’t as cohesive as it is in rivals like the Seat Ateca or Volkswagen Tiguan. They don’t lean as much, either, making them more stable, agile and engaging to drive spiritedly.

The Tucson’s pretty good in this respect. The capacity for the 1.6 T-GDi 230 Hybrid to run in electric mode makes it hushed in town, and also quiet when the petrol engine’s running, even when you really start ringing its neck. The MHEV is similarly hushed, and while it can’t run on electricity alone, it can cut its engine while you’re coasting. The Hybrid’s automatic gearbox changes smoothly, but the one fitted to the MHEV can be a little jerky when manoeuvring. Both MHEV and Hybrid models start and stop their engines smoothly.

On the motorway there’s a fraction more wind noise than you get in an XC40 (mainly from the pillar by your ear), but it’s still relatively hushed and there’s not much road noise. Less favourable are the twangs from the suspension over expansion joints and the light buzz filtering up at times through the steering column.

Oh, and the Hybrids' brakes are a bit fickle. Not with regards to stopping power – which is fine – but their progression. This capriciousness is down to the regenerative system, which feeds energy back to the battery as you slow down but makes the brake pedal less progressive. That said, we’ve driven hybrids with more abrupt brakes than this.