Less powerful than the M135i, but significantly lighter, is the new 128ti actually the more agile and entertaining hot hatch?...

When BMW took the controversial decision to move from rear to front-wheel drive for its all-new 1 Series back in 2019, there was quite an uproar from diehard BMW enthusiasts, but perhaps those petrolheads were a little too quick to judge. You see, that move also gave BMW the opportunity to do something it had never done before: build a front-wheel-drive hot hatch to take on rivals such as the Honda Civic Type R and Volkswagen Golf GTI.

And now it’s finally here. The 128ti (those letters stand for Turismo Internazionale) is, in effect, a lighter, pared-down version of BMW’s M135i range-topper. Under the bonnet sits a detuned version of that car’s turbocharged 2.0-litre engine; here it makes 261bhp instead of 302bhp, but because the 128ti does without all the heavy four-wheel drive gubbins of the M135i, it weighs a useful 80kg less. It also benefits from bespoke sports suspension, retuned dampers, stiffer anti-roll bars, a revised steering setup, a tweaked limited-slip differential (for maximum traction out of corners) and some relatively sticky Michelin Pilot 4 tyres. 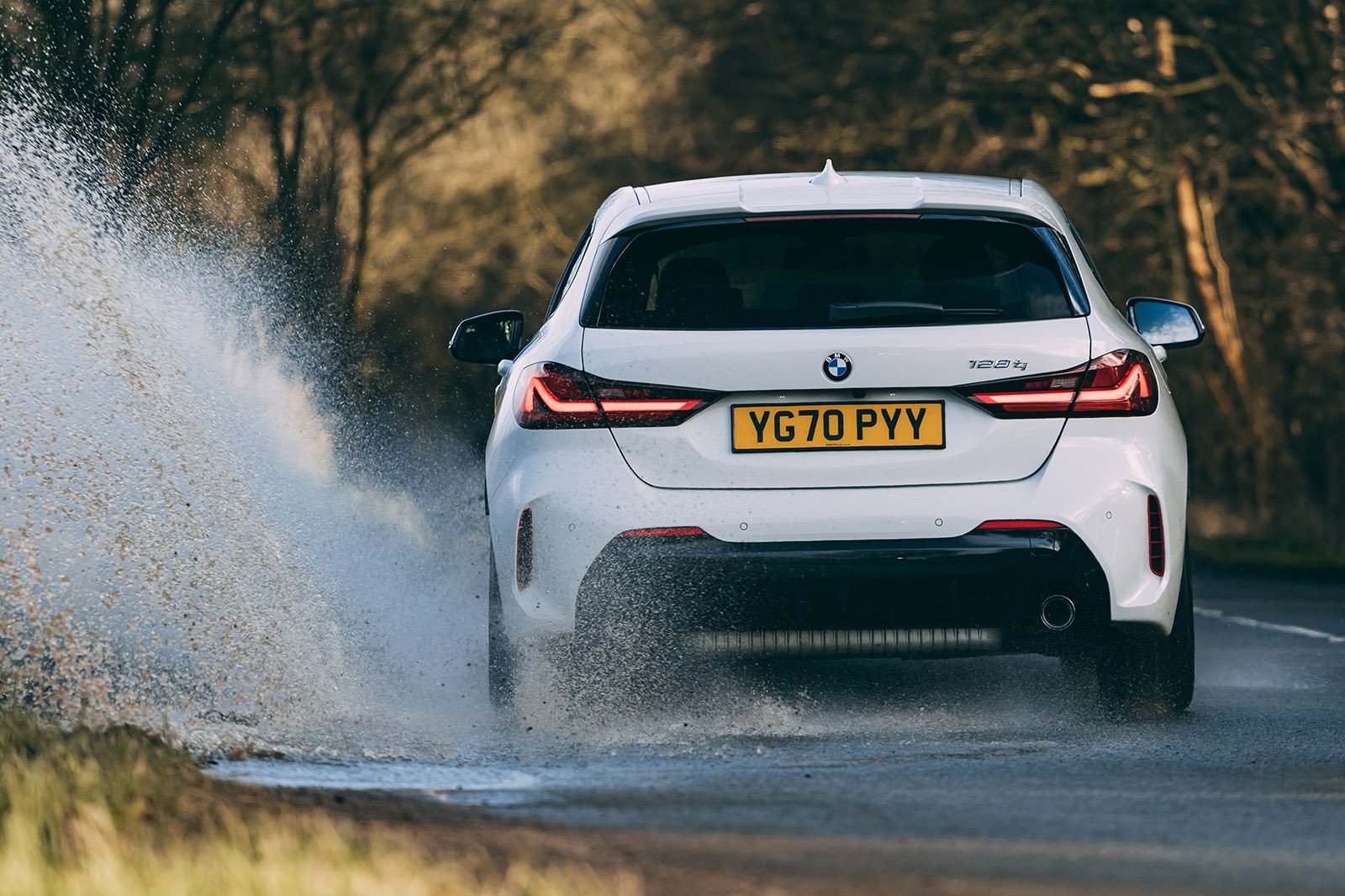 The result is a car that feels perfectly at home on a typical British B-road; the passive suspension strikes an almost perfect balance between high-speed body control and low-speed ride quality. It just goes to prove you don’t need adaptive dampers if fixed settings are judged well enough. Meanwhile the steering feels measured and more convincingly weighted than that of the Golf GTI (although we’d leave it in Comfort mode; Sport is too artificially heavy).

However, in terms of raw handling, the 128ti demonstrates a chuckability that will feel very familiar to those who have driven the latest MK8 GTI. in fact, it’s almost as if BMW used the Golf as a benchmark. Driven hard, a quick lift of the accelerator mid-corner will have the rear end carving a nice progressive arc, allowing you to play with the balance of the car in an approachable and confidence-inspiring manner. Then, when you get back on the power, you can feel its limited-slip front differential working away to drag you out of the bend, with none of the skittishness you experience in the more hardcore Renault Megane RS. 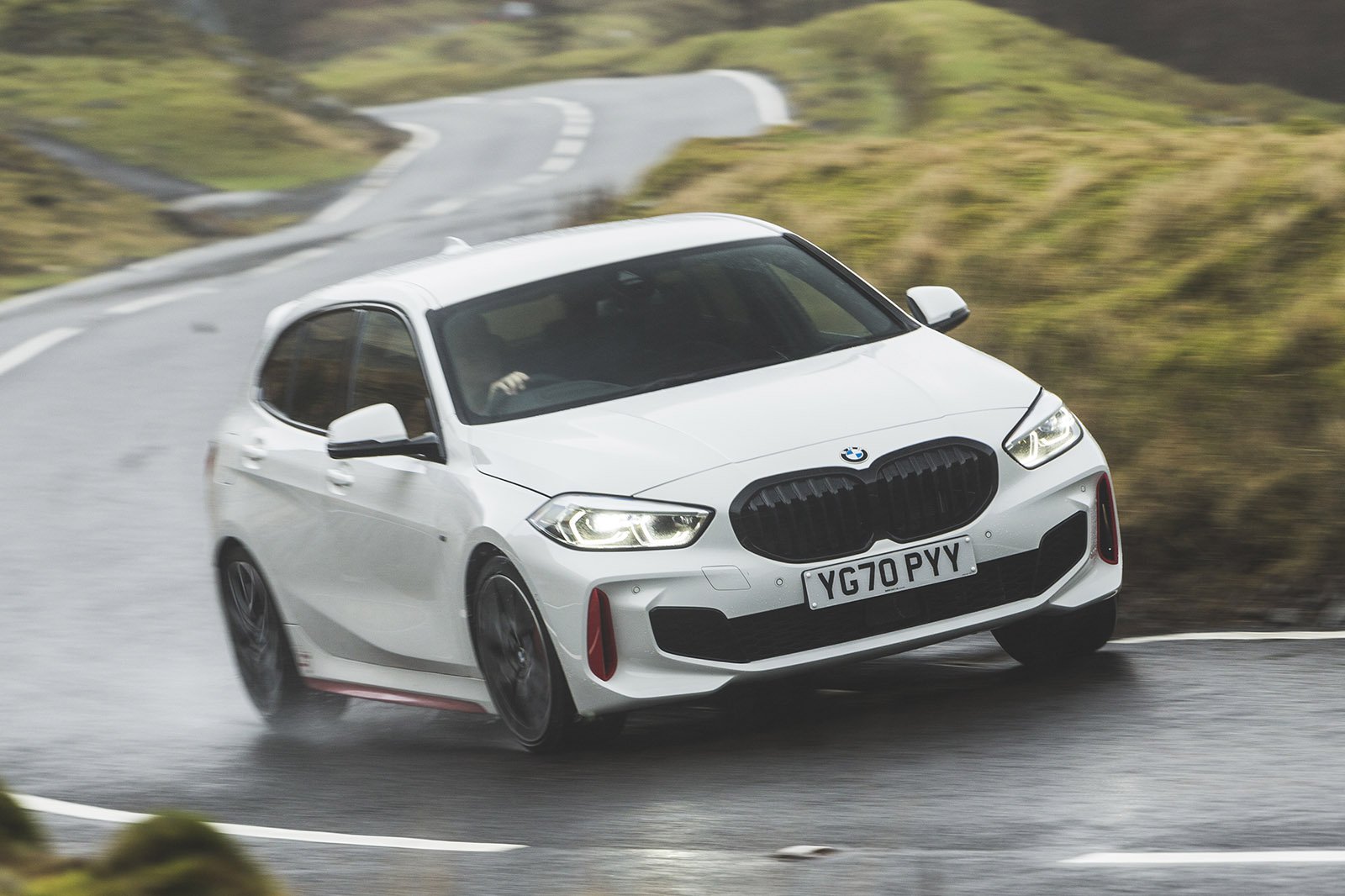 BMW won’t be offering the 128ti with a manual option, but don’t let that put you off, because the eight-speed automatic is one of the best in the business. It not only delivers crisp shifts in manual mode, but also has gear ratios that are perfectly spaced to enable full use of the engine’s broad spread of shove. And while we admit that the BMW’s 2.0-litre engine’s exhaust note doesn’t sound massively exciting, the GTI’s soundtrack isn’t exactly tuneful.

But does it feel quick? Well, 0-60mph in 6.1 seconds might sound a little tardy in this day and age, but get the engine singing and that claimed acceleration figure feels like it’s a little on the conservative side. In other words, your mates are not going to leave you behind on a country road.

Aside from some retro-looking cloth/faux leather seats, red trim highlights and a ti badge stitched onto the lid of the armrest, the 128ti looks like any other 1 Series, but that’s no bad thing. It might lack the visual wow factor of the more expensive Mercedes A35 AMG, but it is, without a doubt, the best interior of any hot hatch when it comes to outright quality. Everywhere you touch you’ll find pleasing, squishy materials, and all the switches feel classy to use.

It also features the best infotainment system in the class: as standard, you get an 8.8in infotainment screen but our press car had the optional 10.3in screen that comes as part of BMW’s Live Cockpit Professional package. Whichever setup you go for, its functions can be navigated through by touching icons on the screen or via the rotary iDrive controller. The latter is the best interface to use while driving because it’s significantly less distracting than the touchscreen; it’s why we prefer the 1 Series’ infotainment system to the Audi S3’s touchscreen-only setup. It’s also easier to use than the A35’s touchpad controller.

Four six-footers will fit in comfort, but you'll find more space in a Focus ST for both people and luggage. If you want to know more about the interior, take a look at our main BMW 1 Series review.