The BMW 3 Series was already our reigning Executive Car of the Year, but it now has a new look, an upgraded interior and more technology...

You don’t use a search engine, you Google, and you don’t video-call your friends and family, you FaceTime them. Yes, occasionally a service or product is so successful that it becomes a verb. And, similarly, there are certain cars that end up transcending their brands.

Take the BMW 3 Series. Sporty yet practical and desirable yet obtainable, it’s BMW’s bestseller. But more than that, it has dominated its class to such an extent over the years that every new premium-badged executive car tends to be billed as the rival manufacturer’s 3 Series.

Here, though, we really do have a new BMW 3 Series. Or, more accurately, an updated version of the seventh-generation car that’s been on sale since 2019. 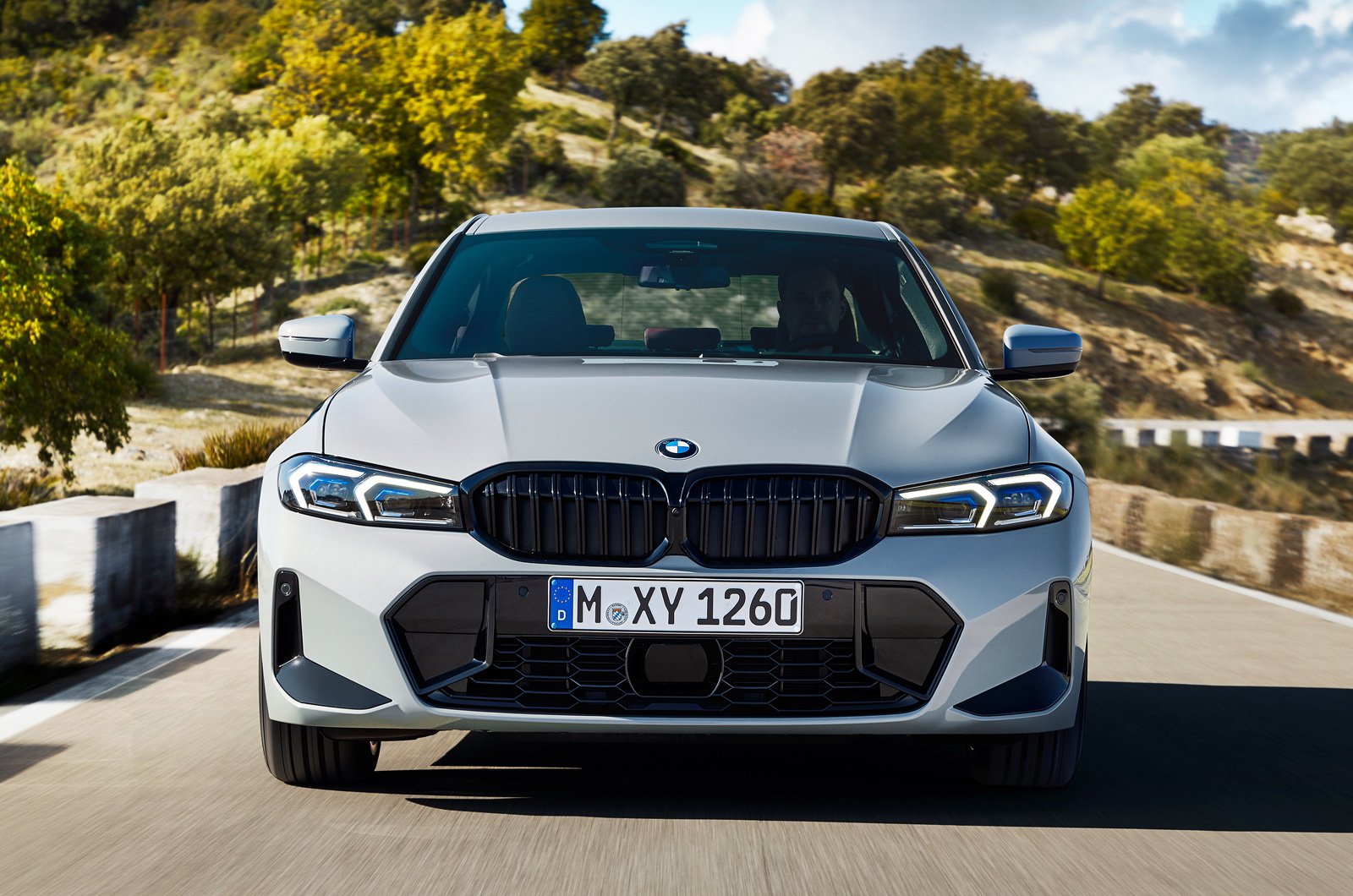 Visual changes include double rather than single slats in the front grille, more angular bumpers and slimmer headlights. Meanwhile, if you upgrade those headlights from the standard full LEDs to adaptive units (which can remain on full beam without dazzling oncoming drivers), there are blue accents around the lights and on their covers that are designed to give the front end of the car a more striking look at night.

The range of exterior paint colours (or should that be shades?) has been extended to include three extra greys, plus the Frozen Tanzanite Blue that was previously reserved for the standalone BMW M3 performance variant. And although there’s still plenty of gloss-black exterior detailing, it’s not as extensive as on the pre-facelift 3 Series.

As for the interior, it’s been upgraded with the dashboard from the BMW i4 electric car. That’s mostly great news, because it means you get a huge curved display, which is made up of two screens – a 12.3in one for instrumentation and a 14.9in infotainment touchscreen. 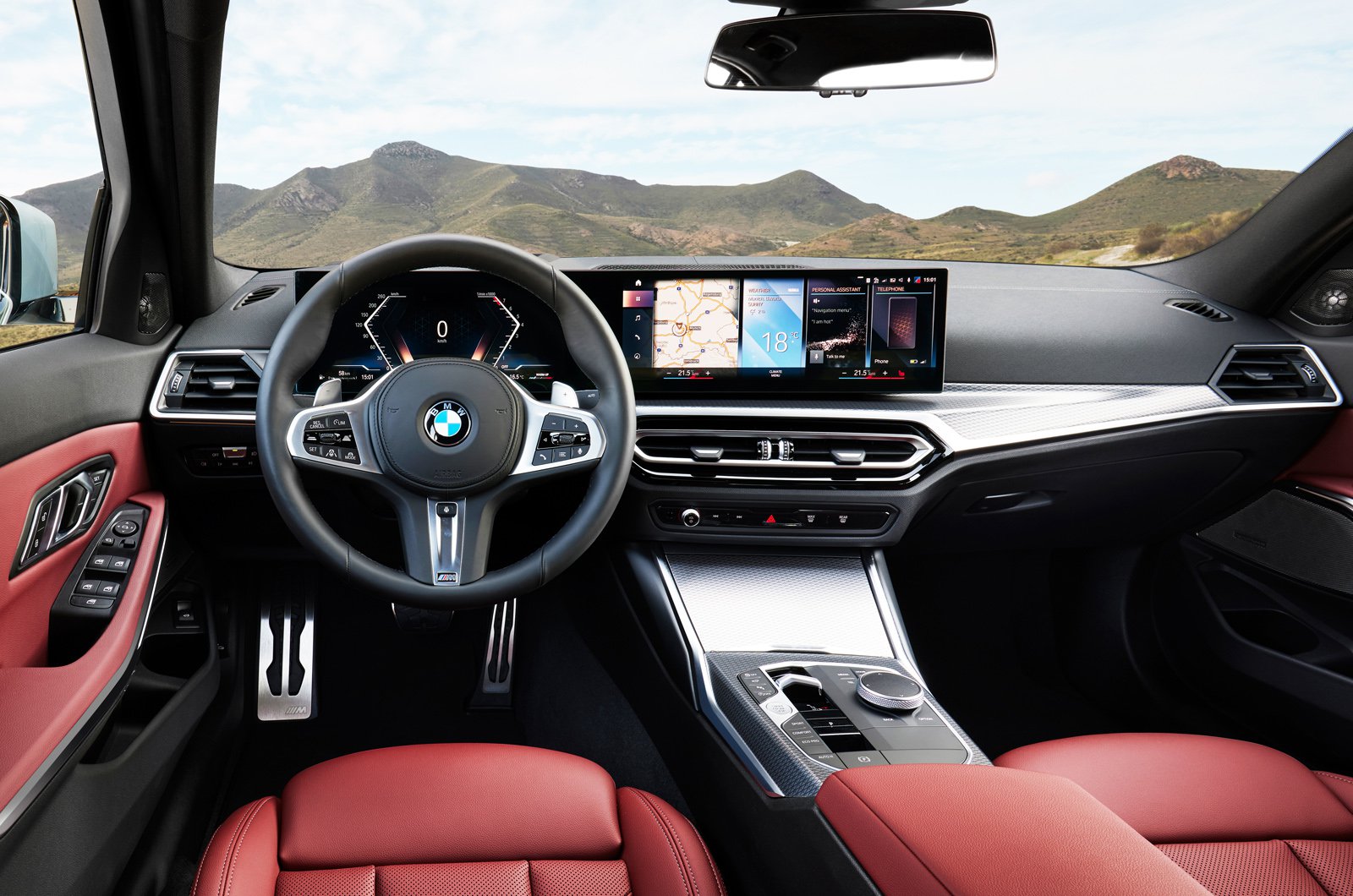 It looks striking, the graphics are pin-sharp, and the infotainment screen features logically laid out menus and is very quick to respond when you touch it.

Just as importantly, BMW still gives you the option of operating the system using a rotary controller positioned between the front seats. It makes the infotainment far less distracting to use when you’re driving than the touchscreen-only (plus voice control) interfaces in the Audi A4, Jaguar XE and Volvo S60 rivals.

The one disappointment about the new interior is that you no longer get simple-to-use physical switches for the climate control. Instead, you have to adjust the temperature using the touchscreen or the voice control. 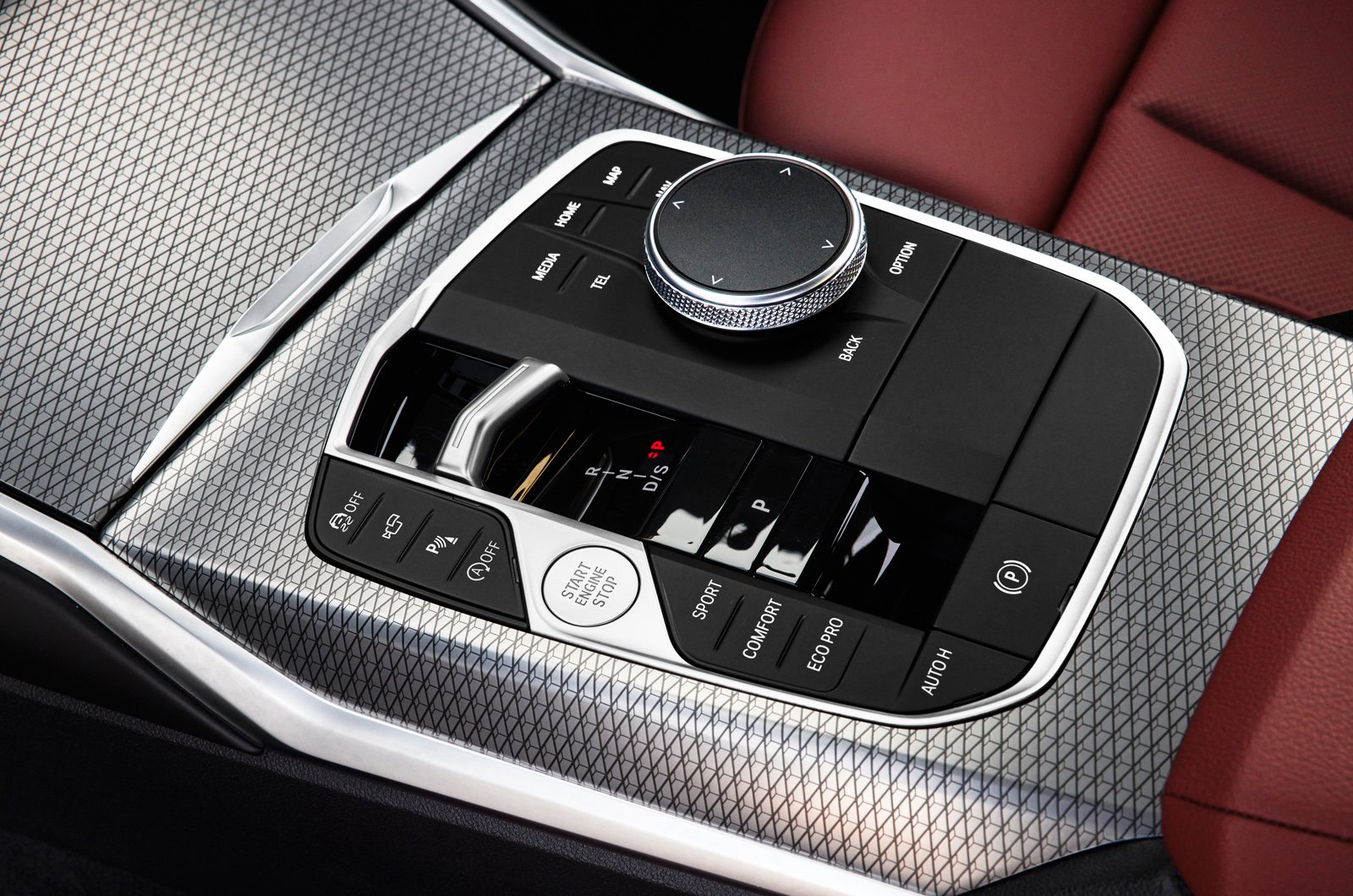 The 330e has a 2.0-litre petrol engine and an electric motor that produce a combined output of 288bhp. Its official electric-only range hasn’t been confirmed yet, but there are no technical changes that suggest it will be vastly different to the pre-facelift version’s 35 miles. 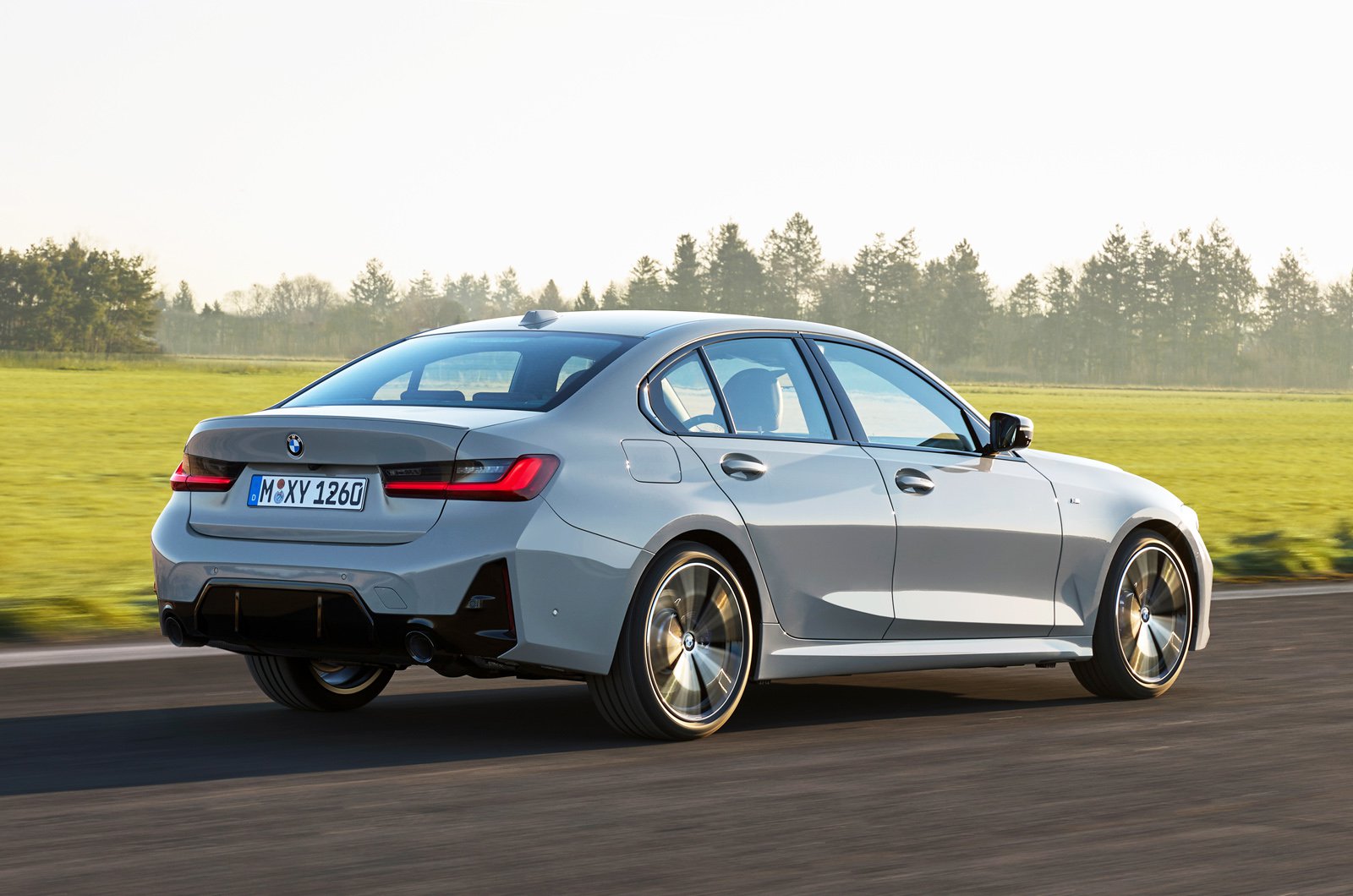 That should be enough to secure its place as our pick of the 3 Series engine range, but it will have a serious fight on its hands when we pit it against the C300e PHEV version of the new Mercedes C-Class. That rival can officially travel up to 62 miles without burning any fuel, and has a lowly 8% company car tax rating.

The one 3 Series engine that has been updated is the most powerful four-cylinder petrol, the 2.0-litre in the 330i. It still produces 254bhp, but BMW is promising an improved power delivery.

The brand’s Steptronic Sport automatic gearbox is now standard across the range, and offers slightly quicker shifts than the regular (non-Sport) Steptronic that was available on the pre-facelift 3 Series. More significantly, though, the Sport brings steering wheel-mounted shift paddles that you can use to flick up and down gears manually, rather than having to nudge the gear lever back and forth. 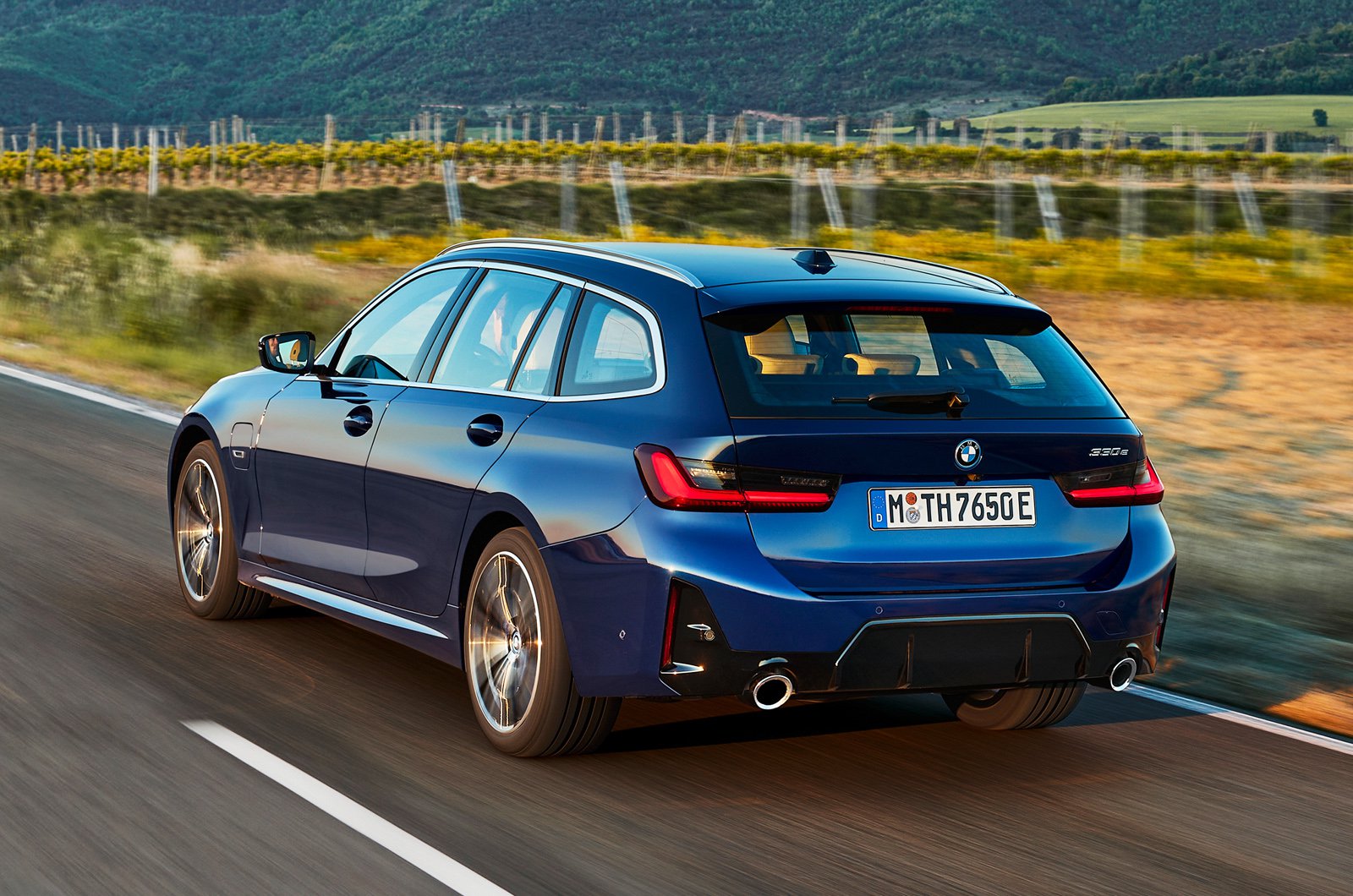 Other items of standard equipment include sat-nav with real-time traffic data, and an auto parking system that carries out all the accelerating, braking and steering necessary for parallel and perpendicular manoeuvres. What’s more, the standard cruise control can apply the brakes to stop you picking up unwanted speed when going down hill.

The optional Driving Assistant Professional Pack adds lane-keeping assistance and upgrades you to an adaptive cruise control system. This not only keeps you a safe distance from the car in front, but adjusts your speed when approaching corners and roundabouts based on sat-nav information.

As before, four-wheel drive is available as an option on some models, and the 3 Series can be ordered in both saloon and Touring estate body styles.