More for you |
The best deals on our most in-demand carsMost and least reliable family carsShould I go ahead with my car purchase now or wait to get a bigger discount? Watch: 2020 BMW 1 Series vs Mercedes A-Class reviewUsed test: BMW M140i vs Mercedes-AMG A35
Home
News
BMW 1 Series Convertible review
news 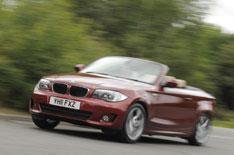 What is it? BMW's smallest convertible gets a face-lift, which includes restyled front and rear lights and a new front bumper. Every engine, apart for the 118i, is also marginally more efficient and cleaner.

What's it like to drive? Seeing as so little has changed, it's hardly surprising that the revised 1 Series Convertible displays broadly the same virtues (and vices) as its predecessor.

There are few convertibles around this price that are as rewarding to drive. The 1 Series has plenty of grip, well-balanced handling and the steering is precise and informative at speed. However, like the old car, at low speeds the steering is overly heavy, making parking and manoeuvring a bit of a chore.

The Convertible's body is commendably stiff and our only gripe is that scarred roads send some vibrations through the steering wheel. Otherwise the 1 Series delivers a controlled, shake-free and generally comfortable ride.

The 174bhp diesel engine in the 120d model we drove is a peach, too. There's plenty of shove, whatever the revs, yet it always remains pretty smooth and refined.

What's it like inside? The fabric roof is good at shutting out wind noise, although it does take 22 seconds to retract more than twice as long as the roof of the rival Audi A3 Cabriolet. Once the roof is down, front-seat occupants are kept insulated from the breeze up until motorway speeds, where the detachable wind deflector becomes essential rather than desirable.

The A3 also trumps the BMW on rear space. The 1 Series is a car that's best suited to two occupants only. Rear legroom is tight, and the steep rake of the seatback means only short journeys are bearable for rear passengers.

Should I buy one?
The 1 Series Convertible is big on appeal but short on space. Yes, these cars aren't bought for their practicality, but the 1 Series is beaten by the A3 Cabriolet's more generous proportions. You'll pay extra for the privilege of that appeal both the A3 and the Volkswagen Eos are cheaper to buy, and despite BMW's improved economy and emissions, both these rivals use less fuel and will cost you less to tax.