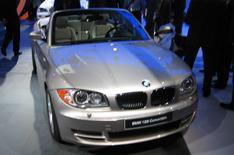 We've already seen the coupe and three- and five-door hatchbacks and now here's the convertible, the fourth member of BMW's 1 Series family.

The styling borrows heavily from the coupe, apart from the addition of the folding cloth roof. This opens and closes at the push of a button in just over 20 seconds at vehicle speeds of up to 25mph.

Behind the folded roof lie a couple of pop-up hoops which are triggered if sensors suspect the car is about to roll over. The air-con system also automatically recognises when the roof is down, changing to a different mode to ensure the car's occupants are kept at the optimum temperature.

With the top up, there's 305 litres of luggage space - this shrinks to 260 litres with the roof down, but it's similar to supermini size.

Gadgets such as stop-start systems, using braking energy to recharge the car's electrics and gearshift indicators, are also expected to feature.

Prices are likely to start at 24,000 when the car goes on sale in the UK this spring.