The new Hyundai Tucson takes on our favourite small SUV, the Nissan Qashqai and the Renault Kadjar... 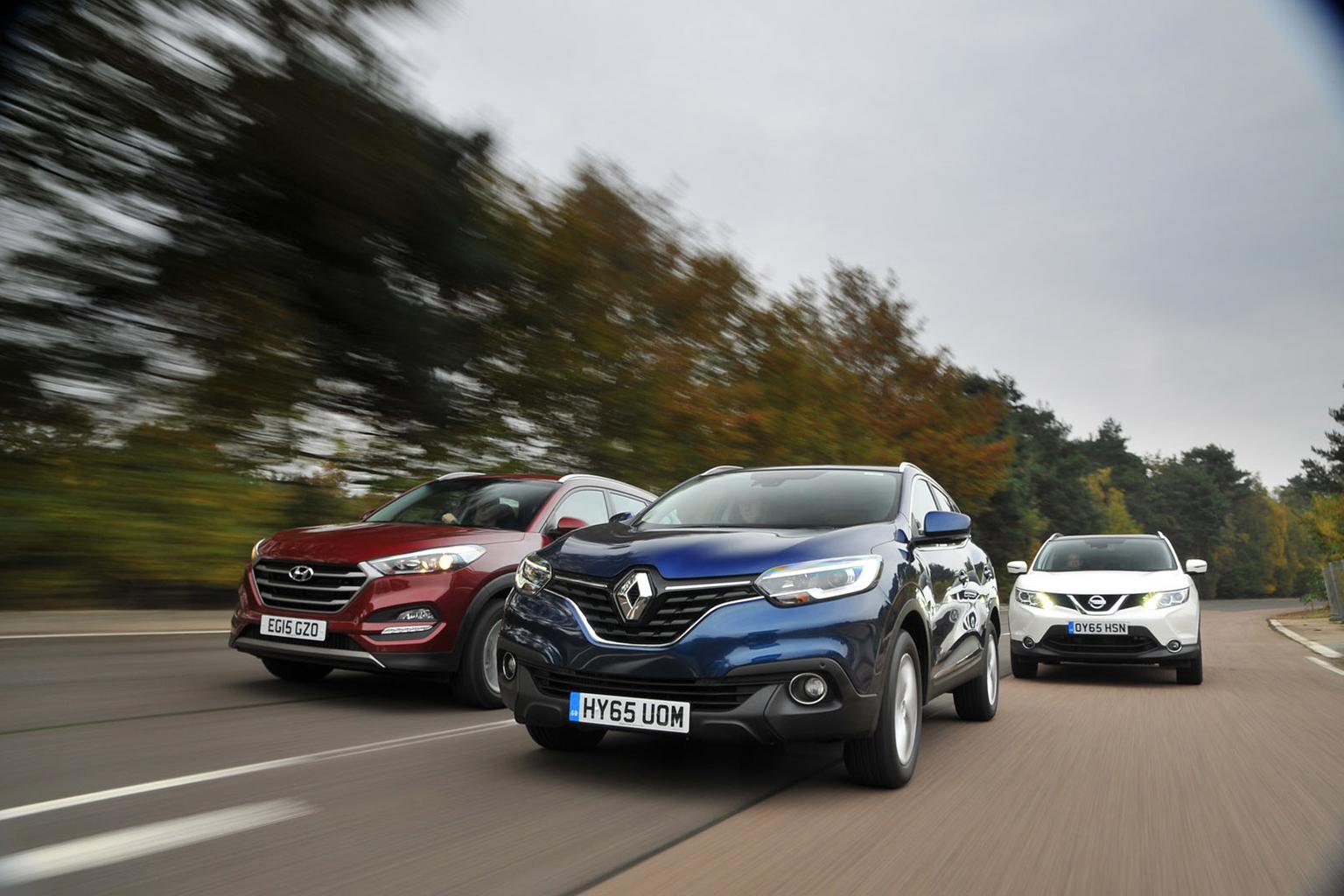 Ford Fiesta, Vauxhall Corsa, Ford Focus, VW Golf – all household names and all, perhaps unsurprisingly, Britain’s best-selling cars. The fifth car on the list isn’t the Vauxhall Astra, VW Polo or even Ford Mondeo, it’s the Nissan Qashqai. Back in 2008 when the SUV-inspired hatch was launched, even Nissan had no idea how successful it would be.

That winning formula has inspired many imitators, the latest of which is the Hyundai Tucson. Its fuel economy and CO2 emissions are unremarkable, but it’s keenly priced and well equipped.

Our third contender is even closer in concept to the Qashqai. In fact, under their skin, the Renault Kadjar and the Nissan are pretty much the same car, courtesy of a long-standing alliance between the two brands. The Kadjar is more than £2000 cheaper to buy, but is there a reason for that?

Replacement for the ix35 is keenly priced. Fuel efficiency isn't its strong suit though.

The current benchmark and a former What Car? Car of the Year. It will prove tough to beat.

Shares many of its nuts and bolts with the Qashqai, yet undercuts it on price by more than £2000.

The Hyundai has a slightly larger engine than its rivals, and more power. However, its extra torque is what really gives it a performance edge over them. Acceleration builds strongly from just 1200rpm, which makes getting up to speed an effortless affair and means you rarely need to change down a gear on motorway inclines.

Meanwhile, the Qashqai and Kadjar have very similar performance, which is hardly surprising given that both are powered by the same 1.5-litre engine. Neither car is far behind the Tucson in a 0-60mph sprint, but both need to be revved much harder to get the same turn of pace.

Fortunately, the Nissan and Renault have relatively smooth and hushed engines, with the Qashqai isolating you from noise and vibration even better than its French rival. The Tucson’s engine is less impressive; it sounds gruff and you feel vibrations coursing through the soles of your feet whenever you accelerate.

It’s fair to say that none of these SUVs offers much in the way of driving thrills. However, the Tucson is the most agile of the trio; it has the most grip and leans the least through corners. It’s just a shame the steering is rather vague and fails to provide you with a great sense of connection with the road.

Although less willing to change direction quickly, the Nissan and Renault are actually more enjoyable to drive. The Qashqai has slightly heavier steering than the Kadjar, which gives extra reassurance when cornering at speed, although that extra resistance is less welcome when parking. Both cars have slicker gearshifts and more progressive brakes than the Hyundai, although again it’s the Nissan that impresses most in these respects.

Crucially, too, the Qashqai has the most comfortable ride. It’s marginally more settled than the Kadjar’s over scruffy surfaces and potholes, despite its larger alloy wheels, yet similarly compliant on fast A-roads and motorways. It’s no luxury limousine, but it’s the most comfortable SUV this side of £25k.

Relatively stiff suspension keeps the Tucson’s body neatly tied down over dips and crests, so your passengers aren’t likely to feel nauseous along an undulating country road. The payoff is a fairly firm ride at low speeds; the Hyundai is less forgiving over sharp-edged bumps and fidgets the most around town.

You sit higher up in these SUVs than you would a conventional hatchback, which means you’re treated to a commanding view of the road ahead. You shouldn’t have much trouble finding a comfortable driving position in any of our protagonists, either, and the fact that adjustable lumbar support is fitted as standard in all three merely enhances their long-distance credentials.

None of these cars looks or feels low-rent inside. However, the Qashqai is undoubtedly a cut above the others, with higher-quality materials on show throughout. There are more soft-touch plastics in the Kadjar than the Tucson, although the Renault’s general fit and finish aren’t perfect; you’ll notice rough edges where some of the fixtures are bolted on.

Two adults will fit comfortably in the back of all of our contenders. Rear knee room is similar across the board and although the Kadjar has a touch more head room than the others, it’ll only be appreciated by those very long in the body. However, anyone who fancies a snooze will certainly appreciate the Hyundai’s reclining rear seats – a feature that isn’t available on the Nissan or Renault.

The Kadjar has the largest boot, although not by as much as its official capacity figures would have you believe. Its load bay is slightly longer than the Nissan’s, but no wider or taller. What’s more, the Qashqai comes with a false boot floor as standard which, in its highest position, irons out the lip that you’d otherwise have to negotiate at the boot entrance. This useful feature is available on the Kadjar but will cost you £200.

Meanwhile, the Tucson has a variable-height boot floor as standard, but its boot is narrower than its rivals’ because of intrusion from the wheelarches. All three cars have 60:40 split-folding rear seats as standard that, when folded, give similar-sized extended load bays.

The Renault appears to be a bargain, undercutting the Hyundai by £1145 and the Nissan by £2175. However, the Qashqai is available with bigger discounts than its newer rivals, bringing all three cars to within £1000 of each other.

Consider all the costs you’re likely to face during three years of ownership and the Renault’s cost advantage over the Nissan grows to £1200, courtesy of its slower predicted depreciation and slightly better real-world fuel economy. The Hyundai falls neatly between its rivals on three-year cost; our resale value experts anticipate it will be worth the most when you sell on, but it’s also the costliest to insure and the least efficient in real-world driving by some margin.

Many buyers will take out a finance agreement, and if you put down a £5000 deposit on a three-year PCP deal the Renault offers the cheapest monthly repayments of £219. The Tucson will cost you an extra £34 a month while the Qashqai will set you back a further £13. All three deals have an annual mileage limit of 12,000 and require you to pay a ‘balloon’ payment at the end of the term if you want to own the car outright.

Company car drivers will probably want to avoid the Hyundai; choose it over the Qashqai and you’ll have to sacrifice an extra £870 of your salary over the next three years as a 40% taxpayer. The Renault is the most affordable company car, though, undercutting the Nissan by £463 in tax bills over the same period.

We’ve chosen the cheapest versions with sat-nav as standard. They also come with alloy wheels, climate and cruise controls, auto headlights and a system that alerts you should you wander out of your lane on the motorway.

The Nissan and Renault go further still with traffic sign recognition, keyless start and automatic wipers, while the Qashqai impresses most with its automatic emergency braking system and front and rear parking sensors. The Tucson does at least get rear sensors and is the only one here with heated front seats.

Let’s cut straight to the chase: the Nissan Qashqai hasn’t lost its crown. Its blend of top-notch refinement, fine driving dynamics and upmarket interior are still unmatched in this class, and although N-tec trim is fairly pricey it comes with lots of luxuries and a host of safety aids, including automatic emergency braking.

Mind you, the new Kadjar runs the Qashqai pretty close – perhaps unsurprising given how closely related the two cars are. The Renault is a fair bit cheaper  – no matter whether you’re buying privately or running one as a company car – and is almost as good to drive, so we can certainly understand why you’d be swayed by the savings on offer.

However, for us those savings aren’t quite enough to make up for the Kadjar’s cheaper-feeling interior and its shorter list of equipment (you have to pay extra for parking sensors and a height-adjustable boot floor, while automatic emergency braking isn’t even an option on Dynamique Nav). What’s more, the Renault isn’t quite as refined as its Japanese rival – and its infotainment system, while decent, isn’t as intuitive.

That leaves the Tucson. It’s certainly a step forward compared  with the old ix35 it replaces, being both better to drive and that bit more practical inside. However, it fails to shine brightly enough in any area to trouble its two rivals and isn’t cheap enough to make up for its shortfalls. In fact, if you’re a company car driver the Hyundai will actually work out the most expensive option.

Against Most expensive on PCP finance; so-so performance

For Cheapest to own; biggest boot; good to drive

Verdict Loses out to the Qashqai - but only just