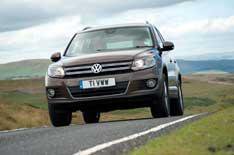 What is it? The 2.0 TDI 110 Bluemotion Technology S is one of the cheapest ways into Volkswagens popular Tiguan SUV, and incorporates all of VWs latest energy-efficiency technology, including longer gearing, brake-energy regeneration and low-rolling-resistance tyres.

This diesel model is available in front-wheel-drive, entry-level S trim only.

Whats it like to drive? The 2.0-litre turbodiesel engine is a little grumbly at idle and when you pull away, but thereafter it produces its 108bhp smoothly and not too noisily.

Acceleration is never more than adequate, however; the longer gearing hampers your progress to the extent that you always have to change down at least one (and usually two) gears to get some meaningful acceleration. The gearbox is typically VW light but with a slight notchiness.

Once youre up to speed, the Tiguan is reasonably quiet; the engine fades into the background and wind noise is minimal, leaving only a slight excess of road noise to disturb the peace.

The steering is light and accurate, but suffers a little too much kickback over mid-corner bumps. It certainly makes low-speed manoeuvres easy, though, which is good because there are no sensors fitted to this S-trimmed model to help you during parking shuffles.

The Tiguan has always been at the sportier end of the small SUV spectrum, and so it remains. It changes direction quickly and grips strongly, but the downside is a ride that occasionally unsettles you more than would be ideal.

Whats it like inside? You certainly cant call into question the Tiguans build quality, but this S model is verging on being a bit stark inside.

Theres air-conditioning, an audio system with auxiliary socket, an electronic handbrake, and variable-speed wipers, but thats about it; no Bluetooth, no auto lights and wipers, no rear parking sensors and no steering-wheel-mounted audio controls.

Space for five is good, though, and the boot will take a familys weekend kit before crying enough.

Should I buy one? The Tiguan is undeniably a lovely thing to live with, but you have to pay a lot for it, and you simply dont get enough for your cash with this version. Nonetheless, average economy of 55.3mpg and a tank range of 752 miles isn't to be sniffed at.

If youre dead set on a Tiguan, wed advise heading for the 138bhp SE model and haggling hard to get that for somewhere below its 22,789 Target Price then youll be getting a car with loads of smooth punch and a generous level of equipment.

Alternatively, the Peugeot 3008 is well equipped, roomy and available at bargain prices.