The good news for lovers of tall SUVs is that the Kuga has a relatively lofty driving position. The bad news is that the driver's seat feels unusually high in relation to the dashboard; so, despite standard seat height adjustment, taller folk might wish the seat dropped a little lower.

That's a minor complaint, though. The seat is supportive and there’s plenty of adjustment, including for lumbar support on all trims, as well as generous levels of steering wheel rake and reach movement. The top ST-Line X and Vignale trims get a 10-way electrically operated driver's seat with a memory function as standard.

Go for ST-Line trim or above and you'll get a 12.3in digital instrument display (in lieu of conventional analogue dials). The graphics are sharp and it shows clearly important driving information, including battery charge on the PHEV, and its contents can be customised to your preference. The rest of the dashboard is easy to use, with big buttons to control the important features, such as the climate control.

The Kuga's front pillars are quite thick and raked back steeply towards the driver compared with a Peugeot 5008's, Volkswagen Tiguan's or Mitsubishi Outlander's. This can restrict forward visibility in certain circumstances, such as when approaching roundabouts. The rear pillars are also rather thick, helping to hide obstacles when reversing as well.

On the plus side, every Kuga comes with front and rear parking sensors as standard, but front- and rear-view cameras are available only as part of the pricey optional Driver’s Assistance Pack. Bright LED headlights are included once you rise to Titanium trim or beyond, while range-topping Vignale models upgrade these to adaptive LED headlights, allowing you to keep the main beams on without dazzling oncoming drivers. 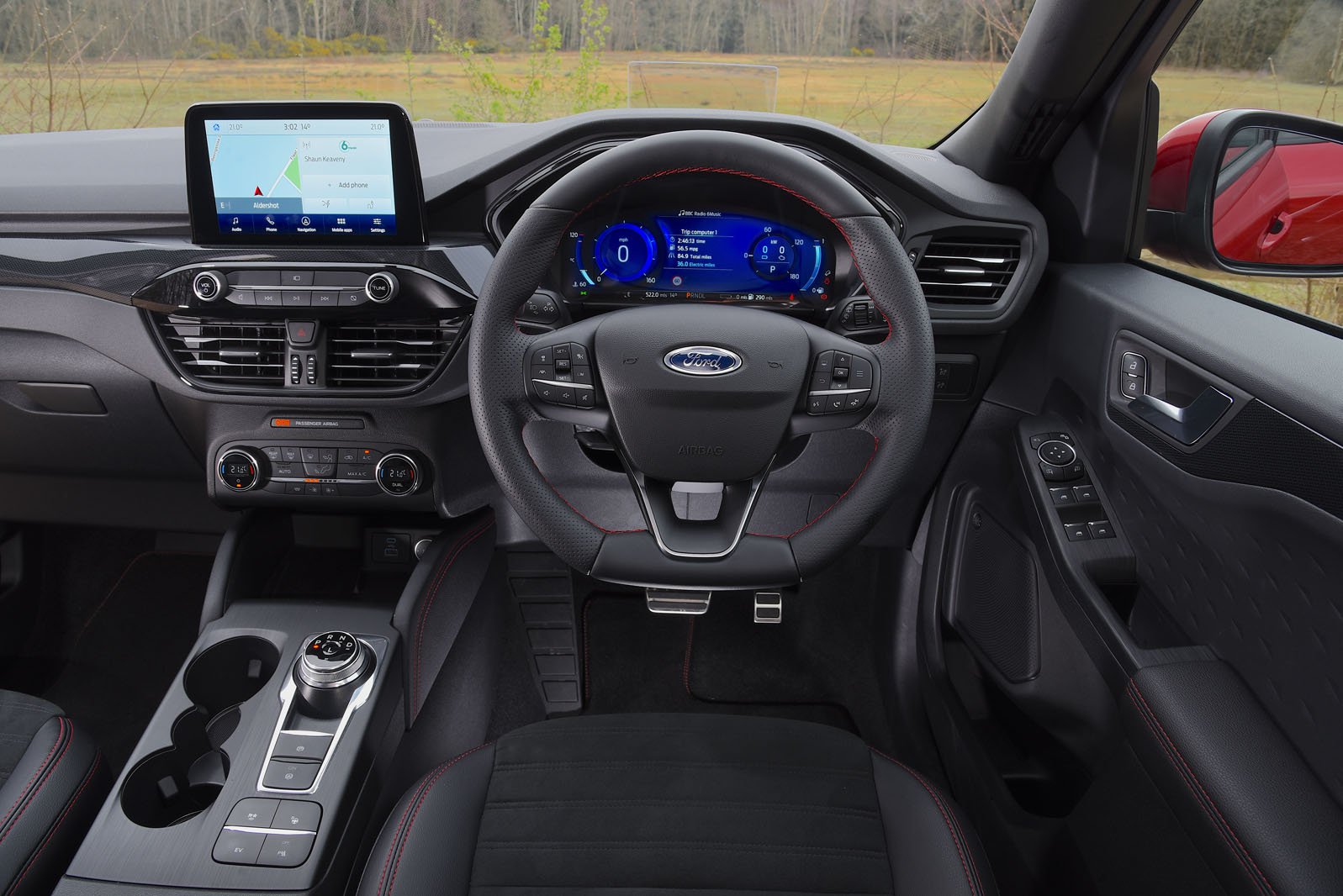 You get an 8.0in touchscreen infotainment system on all models. It’s reasonably responsive to prods, but its graphics are quite basic and some processes, such as choosing your favourite DAB radio station, are unnecessarily convoluted.

Overall, the Kuga's touchscreen is easier to use than the Peugeot 5008's or Mitsubishi Outlander's, and it's much better than the Honda CR-V's. Still, we prefer the Volkwagen Tiguan's and Skoda Kodiaq's, which offer a sharper screen and faster responses. The Mazda CX-5, meanwhile, provides a more user-friendly rotary controller interface instead of relying on a touchscreen, so it's less distracting to operate on the move.

Apple CarPlay/Android Auto smartphone mirroring are included with all Kugas, allowing you to operate certain phone apps (i.e. for music or sat-nav) through the car's touchscreen, plus you get a wireless charging pad for compatible phones. Upgrading to Titanium trim gets you a B&O premium sound system with 10 speakers and 575 watts of power, which sounds pretty punchy.

You'll find more hard, shiny and unappealing plastic inside the Kuga than you will most of its rivals. True, there are some soft-touch plastics, such as on the top of the dashboard and above the door armrests, but even these don't feel as dense or plush as their equivalents in a CX-5 or 5008.

The top-spec Vignale adds a layer of leather to the seats and to the dashboard that helps lift its look and feel, but premium-badged alternatives, such as the Volvo XC40, Audi Q5 and BMW X3, still display far more panache inside and feel better assembled.