The 2.5 Duratec 225PS PHEV, which is the plug-in hybrid, is our favourite version. It pairs a 2.5-litre petrol engine with an electric motor for a combined power output of 222bhp, and it's a pretty nippy combo; during our testing, it managed 0-60mph in a very respectable 8.6sec. That sort of pace puts it towards the sharper end of the performance spectrum in the large SUV class, and makes it quicker than the Mitsubishi Outlander PHEV. The Volvo XC40 T5 Recharge is quicker still, though.

Officially, the PHEV has an electric-only range of up to 35 miles. We managed 31 miles during our real-world testing, while most of its rivals will do more like 20 miles on a full charge. The electric motor is powerful enough to get you up to motorway speeds on its own, and, if you need more power, the petrol engine will automatically cut in when required.

The best ride comes with the softer suspension setup that's fitted to Zetec, Titanium and Vignale trim. It's a little bouncy compared with a Peugeot 5008 or Honda CR-V over the kind of big dips and crests you encounter along some country roads, but otherwise it's pretty comfortable. It's great at plucking the sting from any nasty potholes or expansion joints around town, and it stays pretty settled on motorways.

ST-Line trim comes with a stiffer sports suspension setup – except if you order the 2.0 Ecoblue 190 engine. With the stiffer setup, the Kuga follows the contours of the road more closely, which leads to a busier ride; it's far from intolerable, but it may not suit everybody. Our advice is to try before you buy. 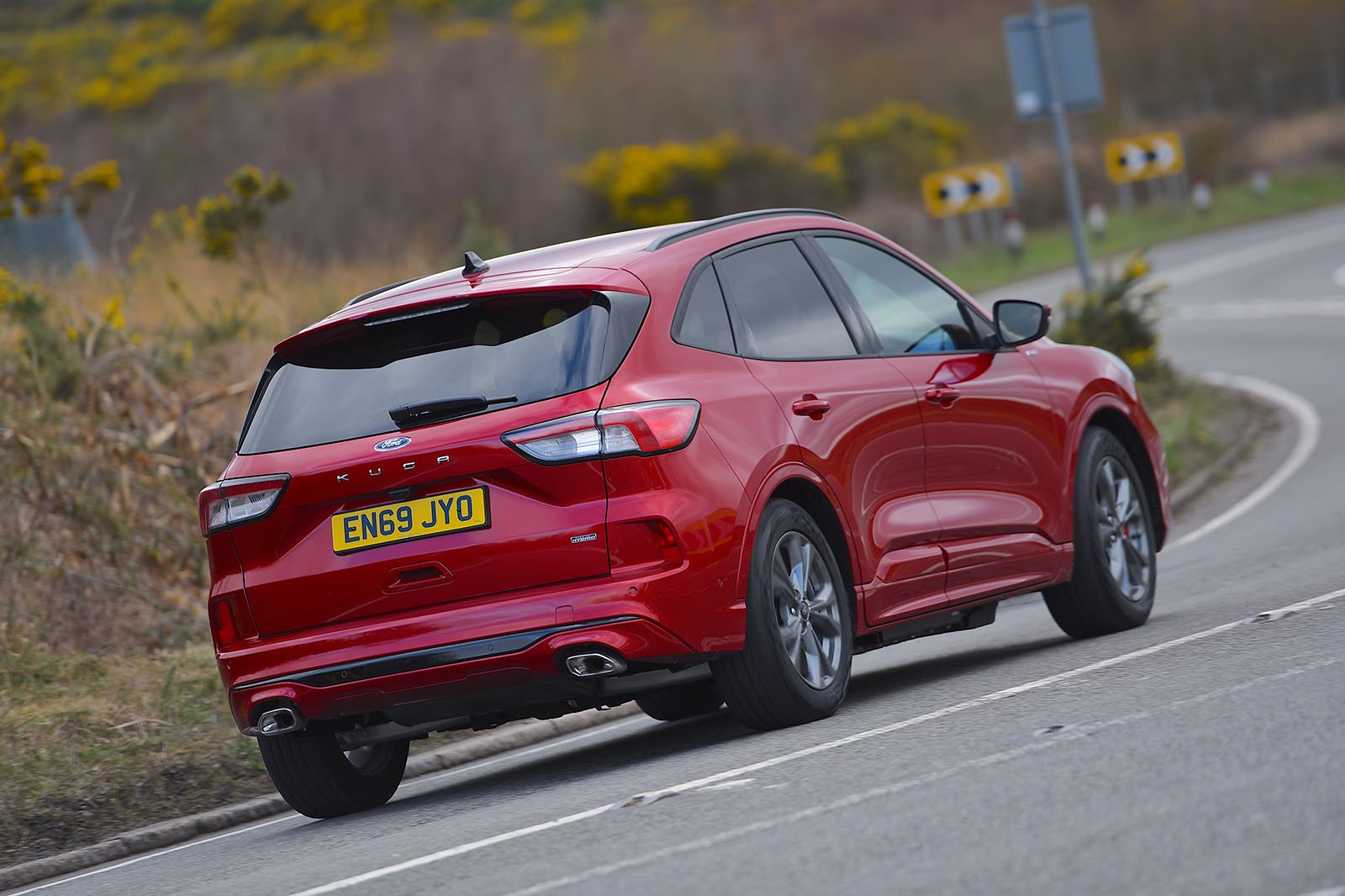 The steering is very quick, which makes the Kuga feel eager to turn in to corners, but it has a consistent desire to self-centre. It's a gentle sensation but an unnatural one, and doesn't help to put you at ease while guiding the Kuga through quicker turns that require a deft touch.

The Kuga is a tall car, and, in PHEV form – with its extra battery pack – quite heavy. As a result, it suffers from an obvious amount of body lean through corners, even with the sportier suspension fitted to ST-Line models. There are certainly nimbler large SUVs out there, but, as far as plug-in hybrid SUVs go, the Kuga PHEV is one of the best to drive. It hides its bulk far better than an Outlander PHEV or XC40 Recharge.

Road noise is the most noticeable intrusion in the Kuga: at speed, over coarse surfaces, you’re aware of its tyres rumbling away. Vignale models come with an active noise cancelling system that helps reduce this a bit. You can also hear the suspension working away along bumpy roads, but wind noise is very well suppressed on motorways and, overall, the Kuga is as quiet as rivals like the Peugeot 5008, and more hushed than a Mazda CX-5 or Honda CR-V.

In pure electric mode, the Kuga PHEV moves around stealthily, and even when its petrol engine fires up it isn't intrusive – as long as you don't put your foot down hard. If you do, the noise picks up because the CVT automatic gearbox causes the engine revs to soar and stays high until you're up to your desired speed.

The Kuga's brake pedal is pretty consistent, and even the PHEV with its regenerative brakes that harvest power for the battery, don't feel overly grabby.