If you like a lofty driving position, the Honda Jazz has you covered. You sit nice and high, and get the impression that you’re driving a mini-MPV rather than a small hatchback. There’s a good range of adjustment to the steering wheel and the driver’s seat on every trim level has height adjustment.

The steering wheel, seat and pedals line up nicely, too, so you’re not sitting skewed at an angle, and the seat is well padded and comfortable. Our only real complaint is that there's no adjustable lumbar support, although most drivers will find that there’s enough lower back support without this.

Unlike in some other Honda models, such as the Civic and CR-V, all the dashboard buttons in the Jazz are positioned thoughtfully, and we love the chunky knobs that make it so simple to adjust the climate control.

If you’re a nervous parker, the Honda Jazz might well be the car for you. Honda has designed it specifically to have excellent visibility. Looking forwards, you’re greeted with an almost panoramic view of the road ahead, thanks to the tall windscreen and thin front pillars. These, in combination with the car's deep side windows, give a much better view at roundabouts and T-junctions than you get from a Peugeot 208 or Vauxhall Corsa.

The Jazz's deep rear screen makes it fairly easy to judge how much room there is directly behind you when you're reversing, although thick rear pillars do hinder your view of the corners of the car (something that's also true of most of its rivals). Front and rear parking sensors come as standard from mid-spec SR trim, while range-topping EX and Crosstar EX models get a rear-view camera as well.

All trims get bright LED headlights as standard, too, along with a high-beam-assist system that automatically switches between high and low beams as needed. 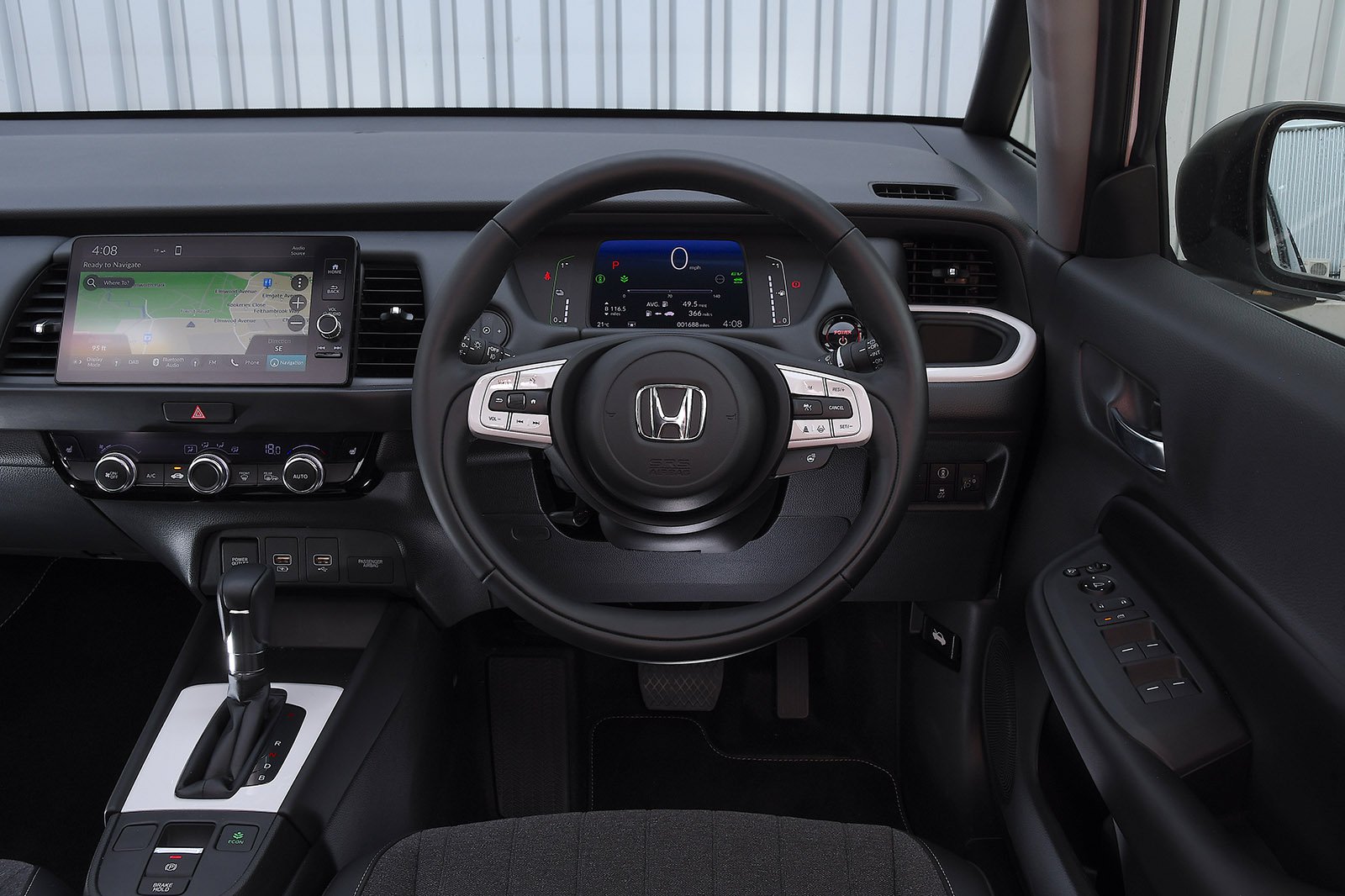 Entry-level SE models have a basic 5.0in colour screen along with Bluetooth, a DAB radio, USB sockets, a four-speaker stereo and secondary controls mounted on the steering wheel.

Spending a little extra on SR trim, which we'd recommend, brings a larger, more advanced 9.0in touchscreen system that comes equipped with Apple CarPlay/Android Auto smartphone mirroring, allowing you to run selected apps from your phone through the screen. That's a good thing because Honda's own operating system is not particularly good, and the resolution of the screen could also be better. Try the Mini if you want a small car with a really great infotainment system.

If you want built-in sat-nav, you’ll need to step up to range-topping EX trim, while the Crosstar EX also gets an upgraded, eight-speaker stereo with a subwoofer.

The interior quality in the Honda Jazz is mostly impressive, and it's particularly good in the centre section of the dashboard, which is trimmed with soft-touch materials and is a step up from the sea of hard plastics you get in the Seat Ibiza or Skoda Fabia. All the buttons and dials feel impressively well damped.

Once you start to poke around, you’ll find that the plastics lower down are a little scratchy and brittle-feeling, as they are in most small cars. EX models get a leather-covered steering wheel and gear lever, both of which give the interior a welcome lift, and we also like the idea of the water-repellent fabric upholstery used in the Crosstar EX – it could come in handy if you spill your coffee.

Overall, the Honda Jazz isn't as classy inside as the Mini or Peugeot 208, but feels more upmarket than the Ford Fiesta or Toyota Yaris.