* Volkswagen Golf problems from 1997 present * Reliability issues and recalls explained * Tell us if you have had problems with your Golf... 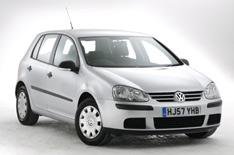 The VW Golf is a car that almost needs no introduction. Since its launch back in 1973, its popularity has grown to the point that it is now the benchmark small family hatchback.

The simple fact is, the Golf is well made, roomy, efficient, competitively priced and has fantastic residual values. There are rivals that do a marginally better job in lone areas, but none do everything a family needs to such a high standard while remaining fun to drive.

An automatic 'box could be teamed with either the 1.6-litre or 2.3 V5. Only one diesel engine - a 1.9 was available, although it was revised and given a turbocharger to give better performance and economy over the years. An automatic gearbox was an option.

The Mk5 Golf went on sale from 2004, again in hatch and estate forms. It got a fresh new face and the engine line-up was simplified; now there were four petrols and two diesels. You could have either lower-powered 1.4- or 1.6-litre petrols, or go for a little more zest with either the 2.0-litre GTI or 3.2-litre R32. If you wanted diesel, you could have either a 1.9- or 2.0-litre, both of which and all the petrol cars - could be paired with Volkswagen's DSG automatic gearbox.

The Mk7 Golf will be on sale in January 2013, so it's too early to comment on reliability just yet. Although the Golf is famed for its solid looks and high-quality interior, there are still things to watch out for when it comes to buying one used.

Need our help?
Got a problem with your car? Our team is here to help you solve it. Just contact the What Car? Helpdesk.

Volkswagen Golf seat belt problem (1997-2004 cars)
Some cars built between July and December 1998 had problems with their seat belts. It's possible that the heat discharged during the release of the front seat belt tensioners can set fire to the lower pillar trim.

Volkswagen Golf Isofix problem (1997-2004 estate cars)
There have been Isofix problems reported on some estate cars built between May and June 2000. Welding faults on the seams of the Isofix mounting bars were found, therefore not guaranteeing the safe support of a child seat in a crash.

Volkswagen Golf passenger airbag problem (1997-2004 cars)
Some cars built between October and November 2000 had problems with their passenger airbags. They may not release properly due to a leak from the pressure reservoir of the gas generator.

Volkswagen Golf rear axle problem (1997-2004 cars)
Some cars built between February 1997 and February in 2000 had problems with their rear axles. Moisture could enter the ball joints, which would in turn start corrosion causing, the joints to seize.

Volkswagen Golf anti-lock brakes problem (1997-2004 cars)
Owners have reported problems with the anti-lock brakes on cars built between March and September 2001. There's a chance the ABS control unit could develop an electric fault, causing overheating, which could lead to a fire and loss of ABS.

Volkswagen Golf brakes problem (1997-2004 cars)
Some cars built between February 1998 and December 1999 had problems with their brakes. A brake servo pipe was known to crack and leak, requiring the driver to apply much more force to the brake pedal in order to get the same braking force.

Volkswagen Golf electrics problems (1997-2004 cars)
There have been reports of problems with the Mk4 Golf's electric windows and central locking. The car's ECU is also known to be quite problematic, causing misfires, so do a thorough check of all the car's electrical functions before handing over any money.

Volkswagen Golf fuel pump problem (2004-2009 diesel cars)
There have been reports of fuel pump problems on cars built between March and August 2008. The bolts securing the pump may be faulty and could and a diesel fuel leak may occur.

Volkswagen Golf heating problem (2004-2009 cars)
Some cars built between November 2006 and January 2007 may have problems with their heating elements. The element earth connection may overheat and could lead to a fire.

Volkswagen Golf clutch problem (2004-2009 cars)
Owners of some cars built between September 2009 and August 2008 have had problems with their clutches. In rare cases the clutch can open unexpectedly, causing a loss of drive.

Volkswagen Golf Bluemotion problems (2009-2013 Bluemotion cars)
Some owners of Bluemotion models have complained about the performance or economy of their cars. In some cases this is due to a blocked particulate filter, so check to see if either is affected on your test drive.

Volkswagen Golf rust problem (2004-2009 cars)
Simon Thompson had a Mk 5 Volkswagen Golf TDI which he kept in good condition with regular waxing, so he was concerned to spot rust bubbles on the bodywork.

'The lip of the front left wing had kinked and rust was building rapidly,' he said. 'The right front wing had signs of corrosion, too. It's been regularly waxed, so I was amazed to find it rusting.'

Internet forum discussions revealed that rust around the wheelarch is common on diesel Golfs of this age, and that VW had traced it to water-logged foam pads on the inner wing chafing through the paint.

Simon's dealer, Isaac Agnew in Belfast, sent a claim to Volkswagen under the 12-year anti-perforation warranty. Five weeks and many enquiries later, Simon had heard nothing, so he contacted Helpdesk.

We asked VW why it was taking so long to sort a known problem. Shortly after, VW customer relations told Simon that the damage wasn't covered by the anti-perforation warranty because it was caused by a mechanical defect, not defective paint or bodywork.

However, even though Simon's car was outside its three-year mechanical warranty, his loyalty to the brand (he's owned six VWs) secured a 80% refund of the 821 repair cost from the manufacturer.

If this happens to you:

Look at online owners' forums to check whether other people have experienced the same problem. If so, collect this as evidence.

Get your dealer to submit a claim as soon as you spot the damage.