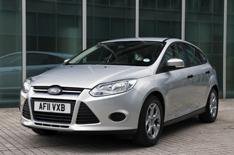 The new Ford Focus 1.0 Ecoboost uses a tiny, three-cylinder petrol engine that replaces the 1.6-litre four-cylinder that has been a staple of the range since the car was launched in 1998.

The all-new 1.0-litre engine has many technical tricks up its sleeve, including a turbocharger that helps produce the same 123bhp as Fords most powerful non-turbo 1.6.

At the same time, fuel economy and CO2 emissions are improved by more than 20%.

A detuned version with 99bhp and even better fuel consumption will also be offered.

The 1.0 Ecoboost engine is being launched in the Focus, but will go into the C-Max, Grand C-Max and forthcoming B-Max compact MPV by the end of the year.

Whats it like to drive? Extraordinary is not too strong a word.

You might expect such a small three-cylinder engine to be unrefined, but this isn't the case. Indeed, Fords own engineers say a Focus fitted with the 1.0-litre Ecoboost engine is the quietest of the entire range.

Outright performance feels at least a match for the 1.6, as it should given the fact it has equal power and less weight. However, it's the driveability of this engine that is most impressive.

Far from being a high-rev screamer, it delivers maximum urge at just 1300rpm and keeps on pulling strongly for longer than any diesel equivalent.

The little engine noise that can be heard is a characterful off-beat hum.

The 123bhp version is married to a slick six-speed manual gearbox, while the 99bhp version has a five-speed box.

Whats it like inside? Indistinguishable from any other Focus until you fire it up.

The cabin isnt as classy or spacious as a Golf hatchback's, but theres still space for four and a square-shaped boot.

Should I buy one? The new 1.0 Ecoboost engine might sound a little odd, but you wont get around the block before realising why Ford has ditched the 1.6 to make space for it.

Theres a premium of 250 for the 99bhp version over the equivalent 1.6, and 500 for the 123bhp over the previous 123bhp 1.6 manual model. Given what you gain in fuel consumption and reduced CO2 liability, it can only be seen as a bargain.