* Better than rivals * Technology will be at forefront * On sale next March... 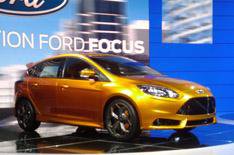 The new Ford Focus will be the best car in it's class when it goes on sale next March, according to new European boss Steve Odell

Speaking at the Focus ST's official launch at the Paris motor show, Odell said the car will represent a better package than rivals such as the VW Golf, Audi A3 and Vauxhall Astra.

'In particular, our car will stand out for its affordable technology,' said Odell. 'Especially, it will be the smartest car in its class, with the introduction of our Synch and My Ford technology, which changes the way you connect with your car.
'This tech has already been a huge hit in the US and we believe it will be in Europe too.'

To celebrate the car's unveiling, Ford has launched a Ford Focus Facebook page, through which fans will be able to vie for spaces on a pre-launch test drive of the car.