Honey, I shrunk the Golf 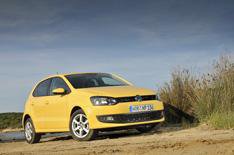 There's always been a strong family resemblance between the Volkswagen Golf and Polo, but with the launch of this, the fifth-generation Polo, the two now look more like identical twins than kissing cousins.

Yes, the Polo is still smaller than the Golf although, in keeping with the industry's insatiable insistence on building ever bigger models, VW's supermini is actually about the same size as a Mk2 Golf.

If you're squinting into the sun the first time you clap eyes on one, however, chances are the new Polo probably won't register too highly on your 'wow' meter.