* Honda is working on producing a sub-100g/km Jazz * Challenge is to retain all the features that Jazz buyers appreciate * Unlikely to use new Jazz hybrids powertrain in other European cars... 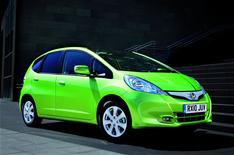 The hybrid Honda Jazz due to be introduced next year is likely to have an average economy figure of around 65mpg and CO2 emissions of 104g/km but the company will not stop at that, says Kohei Hitomi, the project leader behind the car.

We are aware of getting below the magic figure of 100g/km and are going to work on technology to be able to achieve that, he said at the Paris motor show today.

One of the problems in bringing CO2 down even further is that it will affect some of the things that buyers most value about the Jazz, he added.

The Jazz is a small car with superb versatility and space and good comfort. said Hitomi. Small cars have some disadvantages in terms of aerodynamics. We would need to have smaller mirrors to improve the aerodynamics, for instance, but would buyers like that?

We would also need to sacrifice space utility for lower CO2 to make way for a bigger motor and battery. We considered such things, but there are benefits for the customer to keep all this versatility.

It does not affect the flexibility of the Jazz interior because the hybrid was envisaged as part of the line-up when the Jazz was being developed, but the under-floor storage area in the boot has been lost to some of the hybrid electrical components.

It is now a relatively old drivetrain, and Hitomi admits it has its limits for further development. With more stringent (emissions) requirements in future we would need to think about a new system, but that would require a high investment and we have to consider the business potential of that. What type of vehicles would it suit and in which markets?

The current system is still very beneficial in that it is smart, low cost, low weight (it adds around 70kg to the weight of a 1.4-litre petrol Jazz) and can be combined with any transmission, says Hitomi.

It is unlikely that Honda will use it in any further European cars, however. We are giving some consideration to using it for other domestic-market models, but we have no concrete plan to increase its use in Europe, said Hitomi.