More for you |
Promoted | 5 reasons why it makes sense to go electric todayBig savings on our Car of the Year Awards winnersWhat Car? Awards 2021: The best cars you can buy2021 Nissan Qashqai: electric and hybrid power revealedCar of the Year 2021
Home
News
New VW Golf prototype review
news 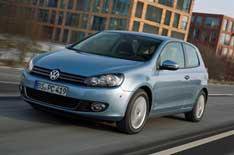 The 2013 Volkswagen Golf will be available with a range of sophisticated new powertrains, and weve driven two of them, in prototype form.

The Golf plug-in hybrid combines a petrol engine with an electric motor powered by batteries that can be recharged, to give a useful electric-only range.

The second prototype is the Golf Blue e-motion, which is an all-electric version of the Golf.

What are they like to drive? We drove versions of the future powertrains in current Golf models.

The Golf plug-in hybrid shows real promise. Its able to travel for longer than most non-plug-in hybrids in electric-only mode, and is beautifully refined when it does so.

As youd expect, the electric motor gives all of its considerable torque right from the word go, so performance is strong; and, when the petrol engine joins in, it does so very smoothly.

Theres still a lot of work to do on the car, but we can see from our very brief drive that, with the right development, this is the kind of car that could be a tough rival for the Chevrolet Volt and Vauxhall Ampera.

The electric Golf Blue e-motion is also a fine car that will provide a stern challenge to the best in class. Its performance is strong at least on a par with the Nissan Leaf's and the car is wonderfully smooth to drive: in many ways it's a perfect city car, but one that is just as at home on the open road, capable of decent pace in complete quiet.

What are they like inside? The Golf plug-in hybrid we drove was a development car. There are incongruous displays in the dashboard and a boot full of electrical kit that will be better concealed when the car finally goes into production.

The Golf e-motion, however, looks very much like a regular Golf which is good news.

The interior has the same space and quality as any Golf, and you can only tell its electric by the fact that the dials and displays are unique to this model, while the boot floor is a little higher than a regular Golfs to accommodate the batteries underneath.

Overall, though, you dont lose much practicality for the sake of electric power.

The Golf Blue e-motion will be worth a look, because its certainly at least as good as a Nissan Leaf. There are the usual caveats that apply to any electric car it has to fit into your lifestyle, with a range of less than 100 miles but its one of the best.

Making a call on the Golf plug-in hybrid is pretty much impossible, given how Volkswagen still has to go in developing it. Nevertheless, weve seen enough already to know this is one space well certainly be watching.