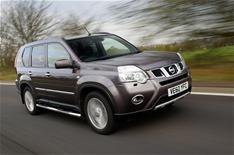 Nissan has plans to reveal a virtually production-ready replacement for the X-Trail at the 2013 Geneva motor show.

The new car will be designed with a broader appeal to global markets, allowing a single model to be sold around the world.

However, Andy Palmer, the companys vice-president for product planning, said that it would retain its current abilities: 'It has to be capable off-road even if it is not used as such.'

That said, it is likely that a two-wheel-drive version would be part of the line-up.

A lower-CO2 version is also likely, with smaller diesel engines a strong consideration. Philosophically we would talk about smaller engines, we believe in downsizing and in clean diesel, so it makes a lot of sense, added Palmer.

Another development from the current car is the option of a third row of seats, with Palmer confirming there will definitely be five- and seven-seat versions offered.

The name is likely to remain unchanged.

Best used large SUVs (and the ones to avoid)