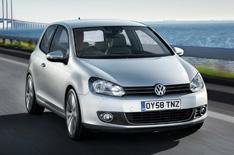 VW Golf
Price from 13,150
On sale January (hatchback), Plus (spring), Bluemotion and GTI (autumn)
Whats great? Its a Golf, so just about everything

The Mk V Golf was always a class-leader thanks to its quality and simplicity. Its understandable, then, that VW decided to refine what it had rather than try anything radical when it came time for an update.

By sticking with the platform of the previous Golf, the Mk VI is reassuringly familiar, even though every external panel and the interior have been restyled.

The initial engine line-up has two 2.0-litre turbodiesels, plus 1.4 and 1.6 petrols. One of the 1.4s is turbocharged, while another has a turbo and a supercharger.
The interior echoes the simplicity and orderliness of the new exterior you can go straight to any of the switches and controls with the unerring aim of a homing pigeon.

Our early tests have revealed shortcomings, but they are only minor. The plastics on the seat bases have a hard, durable feel in contrast to the softer finish everywhere else, and the air-conditioning switches have a fairly lightweight action.

Three- and five-door hatches will be available first, and there will be a tall-roofed Golf Plus coming in the spring.

There will also be GTI and eco-friendly Bluemotion versions in the autumn. The Bluemotion will be the highest-economy, lowest-CO2-emitting small hatch in the UK, with its 1.6 diesel engine achieving 74.3mpg while giving off just 99g/km of CO2.

If you drive a Ford Focus, chances are you see lots of other cars just like yours every day. For those after something a little different, theres the new 149.

It hasnt been officially unveiled yet, but judging by Alfa Romeos past design successes. its almost certain to be a looker.

Unlike the 147 it replaces, the 149 will only be available as a five-door, so that it sits above the new three-door Mito in Alfas range.

Whats more, it may also follow the Mito and have a name and not a number, although that has yet to be confirmed.

Expect a wide range of petrol and diesel engines, with top-level power outputs tipped to be well over 200bhp.

However, Alfa has struggled with reliability and customer service in the past, so we can only hope the new 149 represents a chance for the company to rectify its failings.

Honda Insight
Price 15,000 (est)
On sale Spring
Whats great? Room for a family of five; affordable for a hybrid

Economics tells us that the more we buy of a particular thing, the cheaper it should get.

Honda will show this principle at work with the new Insight hybrid, which will undercut its own Civic IMA and the Toyota Prius by thousands of pounds.

One reason the Insight is cheaper than its rivals is that it doesnt use expensive lithium-ion batteries and plug-in hybrid systems.

Instead, power comes from a development of the existing 113bhp 1.4-litre petrol and electric motor-assisted powertrain of the Civic IMA. Estimates suggest this combination will provide fuel economy of more than 70mpg and CO2 emissions below 100g/km.

Unlike the first version of the Insight, which had two seats, the new car is a five-seater, five-door, and is designed to be practical enough for everyday family use.

Bold styling and bargain prices will be central to the appeal of Chevrolets new Cruze.

This is a replacement for the Lacetti saloon, which means itll be pitched as a cut-price rival to the likes of the four-door Ford Focus and Volkswagen Jetta.

Small saloons arent as popular in this country as they are on the European mainland, but Chevrolet hopes that the Cruzes striking styling will catch UK buyers imaginations.

The big, two-tier front grille is expected to feature on most of Chevrolets forthcoming models, while the overall look is sleeker and more aggressive than anything in the manufacturers current line-up. The interior is also much more eye-catching and represents a big improvement in quality for the company.