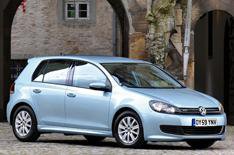 The latest Volkswagen Golf was the safest car of 2009, according to results from crash-test experts Euro NCAP which crash-tests all new cars.

The top five cars all achieved an overall five-star rating, which means they performed well in every category, including adult and child occupant protection, pedestrian protection and safety assist.

Bottom of the table of 33 cars tested in 2009 were the Suzuki Alto and Toyota Urban Cruiser, both of which received just three stars.

Standards are getting tougher
This year standards are to be tightened for tests published after March 3.