Whatever your size or shape, the Volkswagen Golf has plenty of adjustments in seat height and steering wheel rake and reach, so you should be able to find a decent driving position. There’s even a movable centre armrest with lots of cushioning for added support. Lumbar adjustment is standard, although some of our testers didn’t have enough lower back support with the seats fitted to entry-level Life. The sports seats found on Style trim and up are much better and offer excellent side support through corners.

Most of the dashboard controls have been loaded on to the central touchscreen, with a few supplementary touch-sensitive sliders or ‘buttons’ left behind for frequently used commands. R-Line trim and up add touch-sensitive controls on the steering wheel. It looks tidy, but the result is that you’re often taking your eyes off the road momentarily just to perform basic actions, such as changing the interior temperature, a task that’s much less distracting in rivals such as the BMW 1 Series, Ford Focus and Mercedes A-Class.

Mercifully, Life, Active and Style VW Golfs still have physical controls on the steering wheel that can be used to easily interact with the standard 10.0in digital instrument cluster. The display can be configured to show lots of driving information and used for basic controls on the radio, phone and built-in sat-nav.

The Volkswagen Golf's large windscreen and side windows give you good visibility at junctions, although you might have to crane your neck at roundabouts for a clear view around the front pillars. The pillars at the back of the car are large enough to obscure what's lurking behind you when you're looking over your shoulder, although not nearly as much as they do in a Mazda 3. Fortunately, front and rear parking sensors are standard on all trims, and a rear-view camera is optional.

Powerful LED headlights are standard, but you can upgrade them on lower trims to the same LED 'Plus' headlights fitted to Style that can direct light around corners. Alternatively, trick Matrix LED headlights are optional on all models, allowing you to leave full beam on without dazzling other road users. They're not cheap, but if you go for a GTD, they are included as standard. 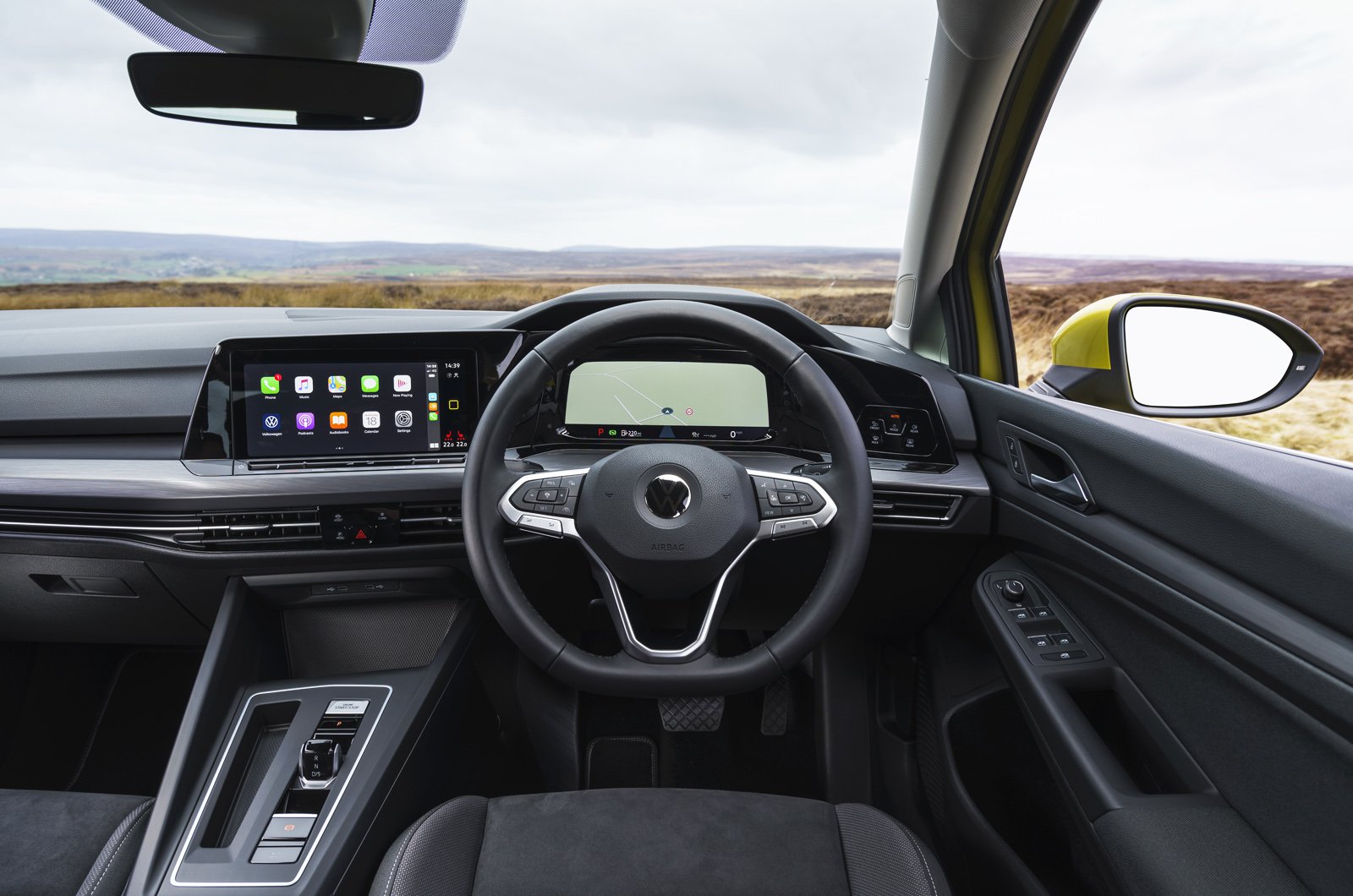 Every Golf comes with a 10.0in touchscreen infotainment system that’s mounted high up so you don't have to look too far from the road to use it. The graphics are sharp and there are lots of helpful standard features, including wireless phone charging, built-in sat-nav, Bluetooth and Apple CarPlay/Android Auto smartphone integration.

It’s a shame ease of use wasn’t prioritised over making the infotainment look swish, though. Some of the menus are confusingly arranged, and to make matters worse, there are no physical shortcut buttons to take you quickly from one menu to the next. You can (at great expense) add a voice control system. That should translate commands such as “My hands are cold” as a request to switch on the heated steering wheel (where fitted), although it doesn't always work, especially if there are other sounds, such as screaming kids, in the car. Early versions of the infotainment system we've tried have had software bugs that have caused the screen to freeze.

The Mercedes A-Class has a more user-friendly infotainment system, while the BMW 1 Series' iDrive system knocks the Golf's set-up for six. Both have more logical menus and supplement their touchscreens with physical controls between the front seats, so they're much easier to use while driving. The Golf's standard six-speaker stereo sounds decent, with a 10-speaker Harman Kardon system optional on all models but the GTE.

The Volkswagen Golf has historically been a paragon of quality, but this is less true of the current model. At first glance, everything looks smart, clean and modern, and there are some soft-touch surfaces on the upper parts of the dashboard and the tops of the front doors. There are other nice elements, too, such as the metal trims and carpeted door bins, which prevent loose items from rattling around.

However, the Golf is neither as opulent inside as the Mercedes A-Class nor as uniformly well bolted together and smartly finished as the BMW 1 Series. It uses lots of harder and scratchier plastics, especially in the rear. It's not only premium-badged rivals that outshine the Golf, either; the Mazda 3 has a much nicer finish inside. However, the VW Golf still ranks above some other mainstream family cars on quality, including the Ford Focus and Skoda Scala.