When it comes to engine choices for the Volkswagen Golf, you could consider the more affordable 128bhp 1.5 TSI 130, but we think the more muscular 148bhp 1.5 TSI 150 makes the most sense out of the petrol range. It’s noticeably swifter getting up to motorway speeds (0-62mph comes in a sprightly 8.5sec), or when overtaking that tractor you've got stuck behind. If you only do urban routes, though, the 108bhp 1.0 TSI 110 should suffice, thanks to plenty of urgency low in the rev range, so it has plenty of poke for the cut and thrust of city traffic.

Some mild hybrid tech is available on the 1.0 eTSI and more potent 148bhp 1.5 eTSI. In both cases, the engine is assisted by a small electric motor that helps them pull even more strongly from low revs than the non-hybrid equivalent. They both feel quite brisk when you work them hard, especially the 1.5, which can see you past a BMW 118i if you line up next to one at the lights. The automatic gearbox is responsive when you ask for a quick burst of pace.

Diesel fans, meanwhile, will enjoy how strong the entry-level 2.0 TDI 110 feels at low revs. It makes for relaxed progress when you’re not in a hurry but, as with the 1.0 TSI, is by no means fast. We’ll let you know about the more powerful 2.0 TDI 150 when we’ve had a go in one, but the GTD is certainly brisk, if not quite hot hatch quick. Its huge reserves of low-down shove means it’s all too easy to spin the front tyres, but makes for effortless acceleration on the move. It’s a shame the standard automatic gearbox is frustratingly hesitant at times.

If performance or PHEV characteristics are a priority, check out our dedicated reviews of the VW Golf GTI and Golf GTE plug-in hybrid.

On its standard suspension, the Golf rides potholes and ridges around town pretty adeptly and with similar ease to the Mercedes A-Class. At higher speeds it can get a little unsettled over minor imperfections, shimmying from side to side in a mildly irritating, but not downright annoying, manner. The BMW 1 Series is certainly firmer, but it's also better tied down on motorways and A-roads.

Opt for a ‘150’ engine and you get a more sophisticated rear suspension set-up that makes the ride less fidgety, with R-Line and GTD models getting lowered sports suspension that’s noticeably firmer, but still perfectly acceptable. The Golf has another trick up its sleeve, too. If you add Dynamic Chassis Control (DCC), which is VW's name for adaptive suspension, the 'comfortometer' needle pings round to cushy.

It has three main settings: Comfort, Normal and Sport. In Comfort, the VW Golf is one of the smoothest-riding cars in the class, dealing with craggy roads exceedingly well. There's a bit of float over dips and crests, but you can dial that out by switching to the slightly stiffer Normal setting. Unusually for this type of system, it also has numerous subtler settings beyond those three default modes, so you can be sure of a set-up that suits. The downside is that DCC is quite pricey, so we wouldn't call it a necessity. 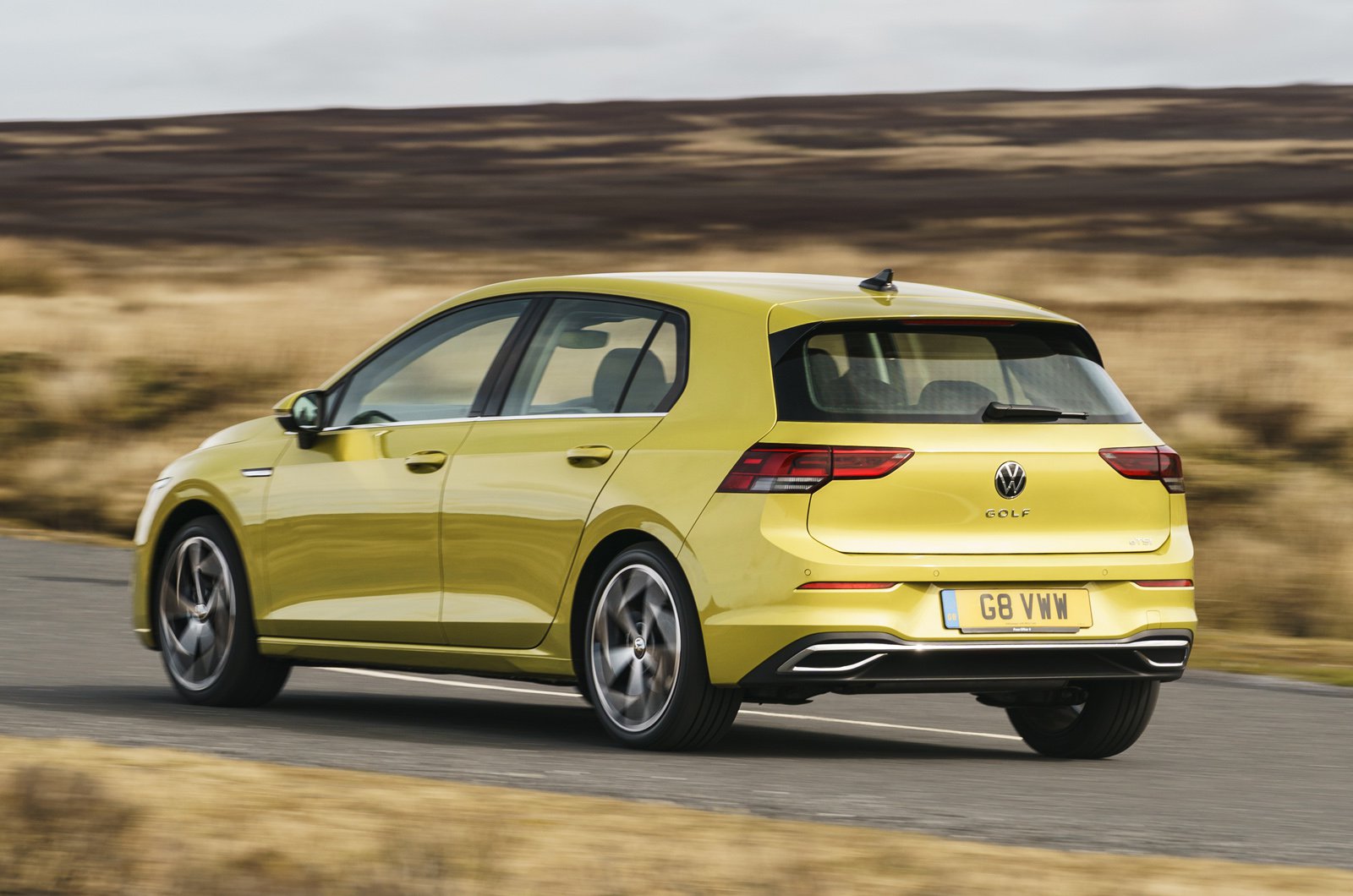 The Volkswagen Golf’s light steering is great for town driving, but some might prefer a bit more heft and directness for faster, twistier roads. The optional Driver Profile Selection system (standard on R Line trim) adds a weightier Sport mode, which helps to an extent, but the steering on the Golf still isn't as sweetly calibrated as on the Ford Focus or as alert and responsive as with the BMW 1 Series.

If a sharper drive is your thing, also consider the Seat Leon, because it's more agile and fun, with less body lean in bends than the Golf. There are ways you can liven up the Golf's handling and make it keener to change direction, though. R-Line trim and the GTD come with a stiffer sports suspension that brings a little more agility to the table, with less body lean and more willingness to change direction. It helps you make the most of the VW Golf’s nicely balanced chassis, although we still prefer the aforementioned rivals.

Alternatively, you can opt for the adaptive DCC suspension on any trim and gain the ability to stiffen things up on demand.

All of the 1.5 TSI petrol engines, including the eTSI 150 mild hybrid, make themselves heard when you rev the Golf beyond 2500rpm. Only the 1.5 TSI 130 becomes coarse if you rev it higher, though. At certain points in the rev range, the TSI 130 also sends some vibration through to the inside of the car, although not as noticeably as the 2.0 TDI diesels. That said, the latter is still one of the smoother diesel engines in the class, whichever power output you pick, while the entry-level 1.0 TSI is one of the more refined three-cylinder engines out there, with little vibration and a muted soundtrack.

In every Golf, you'll notice some wind and, more acutely, road noise at 70mph; the latter is another area where the cheaper Focus outshines it.

The manual gearbox has a defined clutch biting point and the gear lever is precise enough to find your route to all six gears easily. The VW Golf also has a smoother automatic gearbox than the Ford Focus and Mercedes A-Class, and most versions have progressive brakes that allow you to stop with grace. You might notice some slight interference from the energy recovery system that charges the mild hybrid system's battery under braking in eTSI models, though.