More for you |
Secrets of a paramedicWATCH: 2020 Polestar 2 review – better than a Tesla Model 3?Cars that are cheaper to buy on finance than with cashNew issue of What Car? magazine on sale nowBest used coupes for less than £10,000 (and the ones to avoid)
Home
News
SUVs: Mercedes - Vauxhall
news 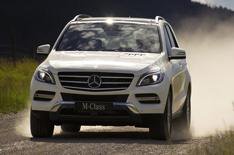 Mercedes M-Class
**What is it? Latest incarnation of Mercedes luxury 4x4
Price from 45,000 (est)
On sale** April

An all-new version of Mercedes plush SUV goes on sale in April, with a new chassis and construction, cleaner, more refined engines and a refreshed cabin.

There'll be an updated 3.0-litre V6 diesel engine with much-improved fuel economy and CO2 emissions, but Mercedes has added an even greener version: the 2.1-litre, four-cylinder, twin-turbo diesel ML250. It has 201bhp and returns an excellent 47mpg and 158g/km.

The handling still doesnt match the BMW X5s; the steering isnt quite as communicative and theres a little more body roll. Nor is there a seven-seat option. However, these are unlikely to be deal-breakers for many buyers.

Instead, the majority of customers are likely to be impressed with excellent refinement, particularly from the V6. The cabin feels luxurious and beautifully finished. The ride is extremely composed, too; this is a capable, comfortable cruiser. Indeed, think of it as a more soothing rival to an X5 and it will have real appeal.

Subaru XV
**What is it? Subarus crack at the Nissan Qashqai market
Price from 21,000 (est)
On sale** March

For a company known for its four-wheel-drive models, Subaru has been slow to enter the compact SUV market dominated by the likes of the Nissan Qashqai and Ford Kuga.

The four-wheel-drive XV is based on the latest Impreza, which is already on sale in some markets and may go on sale in the UK in the winter.

The XV has a raised ride height and body cladding for a tougher look, and uses the Imprezas mechanical parts. Buyers will have a choice of new 1.6- and 2.0-litre horizontally opposed boxer petrol engines, as well as the existing 2.0-litre diesel unit.

All petrol-engined models will come with a stop-start system to improve fuel economy, while a CVT gearbox will be available as an option. Standard safety kit will include a drivers knee airbag and stability control.

Prices are said to be on a par with the Nissan Qashqais.

Vauxhall Corsa SUV
What is it? Supermini-sized SUV to rival the Nissan Juke
Price from 14,000 (est)
On sale November

Nissan invented the supermini-sized SUV niche when it launched the Nissan Juke in 2010. Now its Vauxhalls turn; its version appears in November.

The as-yet-unnamed model will use a new platform that is also likely to underpin the next Corsa and a new Chevrolet compact SUV. Spy shots show a high-roofed design, with a similar look to the current Vauxhall Meriva.

Sources have told us that the car has been tested on UK roads and that both front- and four-wheel-drive versions will be available.