The regular hybrid version of the Toyota RAV4 won’t take you far on electric power alone – even with its electric vehicle (EV) mode selected, you’ll be lucky to go more than a few hundred yards before the 2.5-litre petrol engine takes over. In 'normal' mode, the car chooses when to use the electric motor. That usually means electric power in stop-start traffic and a combination of both power sources at higher speeds.

Having an electric motor and a petrol engine giving their all in unison means acceleration isn’t too shabby, and overtaking is a breeze. The two-wheel drive model can do 0-60mph in 8.4sec while the four-wheel drive is fractionally quicker. Both are faster than the Kia Sorento Hybrid, although it’s worth noting that the front-wheel drive RAV4’s 800kg maximum towing capacity is rather weak. The four-wheel drive version is a much more capable tow car, matching the Sorento hybrid’s 1650kg.

The RAV4 Plug-in pairs the same 2.5-litre petrol engine with a more powerful electric motor for a combined power output of 302bhp, and that's a pretty speedy combination – enough for 0-62mph time of just 6.0 seconds and a top speed of 112mph. That makes it comfortably quicker than the Ford Kuga PHEV and the Land Rover Discovery Sport P300e, and almost matches the plug-in DS 7 Crossback. The electric motor is powerful enough to reach motorway speeds on its own, and Toyota claims the battery will deliver an official electric-only range of up to 46 miles. We managed more than 30 miles on our varied test route – impressive by class standards. The Plug-in can tow up to 1500kg.

Ride comfort is not the RAV4's strongest suit. The suspension is rather firm so the Toyota thuds over potholes and motorway expansion joints more than you might like in a family car. It’s by no means back-breakingly uncomfortable but it never feels particularly settled and you’ll find it twitches as you drive along all but the smoothest of roads.

Its main rival, the Honda CR-V hybrid, is noticeably more settled around town and retains its composure better over sharp ridges and potholes. The Peugeot 5008, which isn't available as a hybrid but is roughly the same size as the RAV4, is another more comfortable alternative. The RAV4 is less wearing on long motorway journeys than the firmer Mazda CX-5, though. 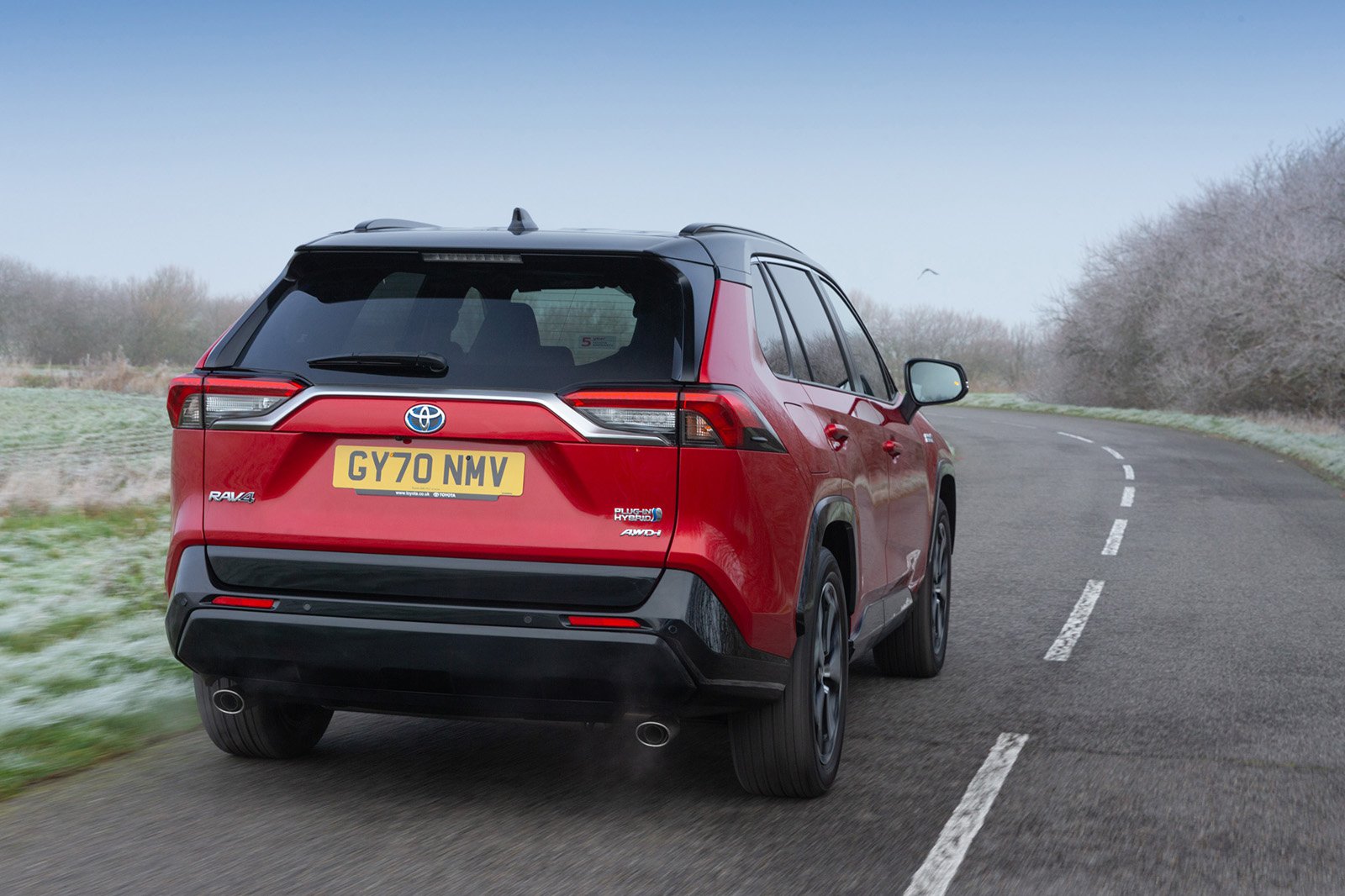 Large SUVs can be relatively fun to drive, as the Mazda CX-5 demonstrates. Sadly, hybrids – especially plug-in hybrids, with their larger battery packs – rarely handle as tidily as pure petrol or diesel SUVs because of the weight of all that electrical gubbins.

The Toyota RAV 4’s greater weight causes it to roll into corners more than the CX-5, and it never feels particularly willing to change direction quickly. It doesn't have a great deal of grip compared with rivals, either, although the four-wheel drive models have a bit more traction in slippery conditions.

The even heavier RAV4 Plug-in, meanwhile, suffers in comparison with its Ford Kuga PHEV rival. The Kuga feels more stable through tight twists and turns, and benefits from quicker steering and a keener front end. The RAV4 is easy to manoeuvre at low speeds, though.

Putting your foot down hard in the Toyota RAV4 sends the petrol engine revving high as the car accelerates, and the revs only start to subside when you ease off. This behaviour – due to the CVT automatic gearbox – doesn’t make for what you’d call relaxing progress, especially as the engine sounds rather coarse and channels vibrations up through your feet.

There is also considerable tyre noise and wind intrusion that will have you cranking the radio volume up at motorway speeds. The rival Honda CR-V hybrid is fitted with a petrol engine that is noticeably less intrusive, and also suffers from a bit less tyre roar on a motorway.

The RAV4 is quite hushed when at a gentle cruise and in stop-start traffic when compared with the majority of pure petrol and diesel rivals, though. As with many hybrids, the Toyota's brakes tend to be a bit grabby while the regeneration system tops the battery up under deceleration, which can make it hard to slow your progress smoothly. That's something you get used to, though.