The Volkswagen Tiguan eHybrid brings plug-in power to a revised range. Is this now the family SUV to beat?... 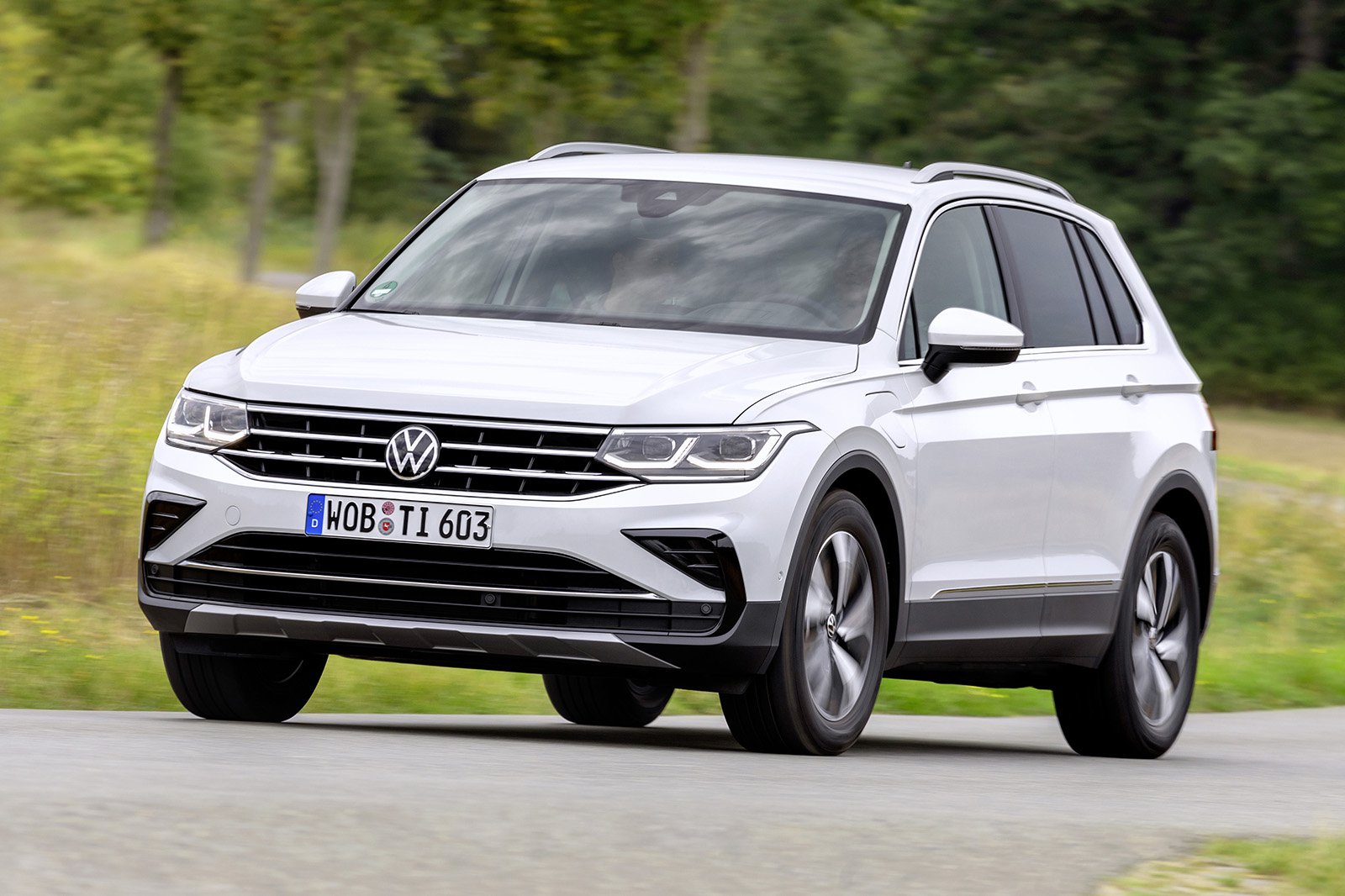 You probably already knew that Volkswagen means people's car, but what might come as more of a surprise is the fact it's the Volkswagen Tiguan that the brands true 'people's car'.

That's right, it's not a sensible hatchback such as the Polo or the Golf that sells in the biggest numbers, but a premium family SUV. In 2019 alone, more than 900,000 Tiguans found homes. So, how do you improve a recipe that’s already wildly popular? Well, you tweak it carefully. Very carefully.

As you can see from the pictures, the 2021 Tiguan has received only minor external design changes, including slightly sharper lines in the front bumper, the addition of LED lights front and rear as standard (with adaptive LED headlights optional) and the adoption of the new minimalist VW badge, which was revealed last year.

However, the biggest news is not the cleaning up of the Tiguan’s aesthetic – it’s the cleaning up of what lies under the bonnet. Not only has every existing engine been tweaked so that it emits less CO2 and drink less fuel, but an all-new 241bhp plug-in hybrid has been added to the line-up. Like the Golf GTE and Passat GTE, this eHybrid model combines a 1.4-litre petrol engine with an electric motor. The result is an all-electric top speed of 81mph and 31 miles of electric-only range in the official WLTP test. 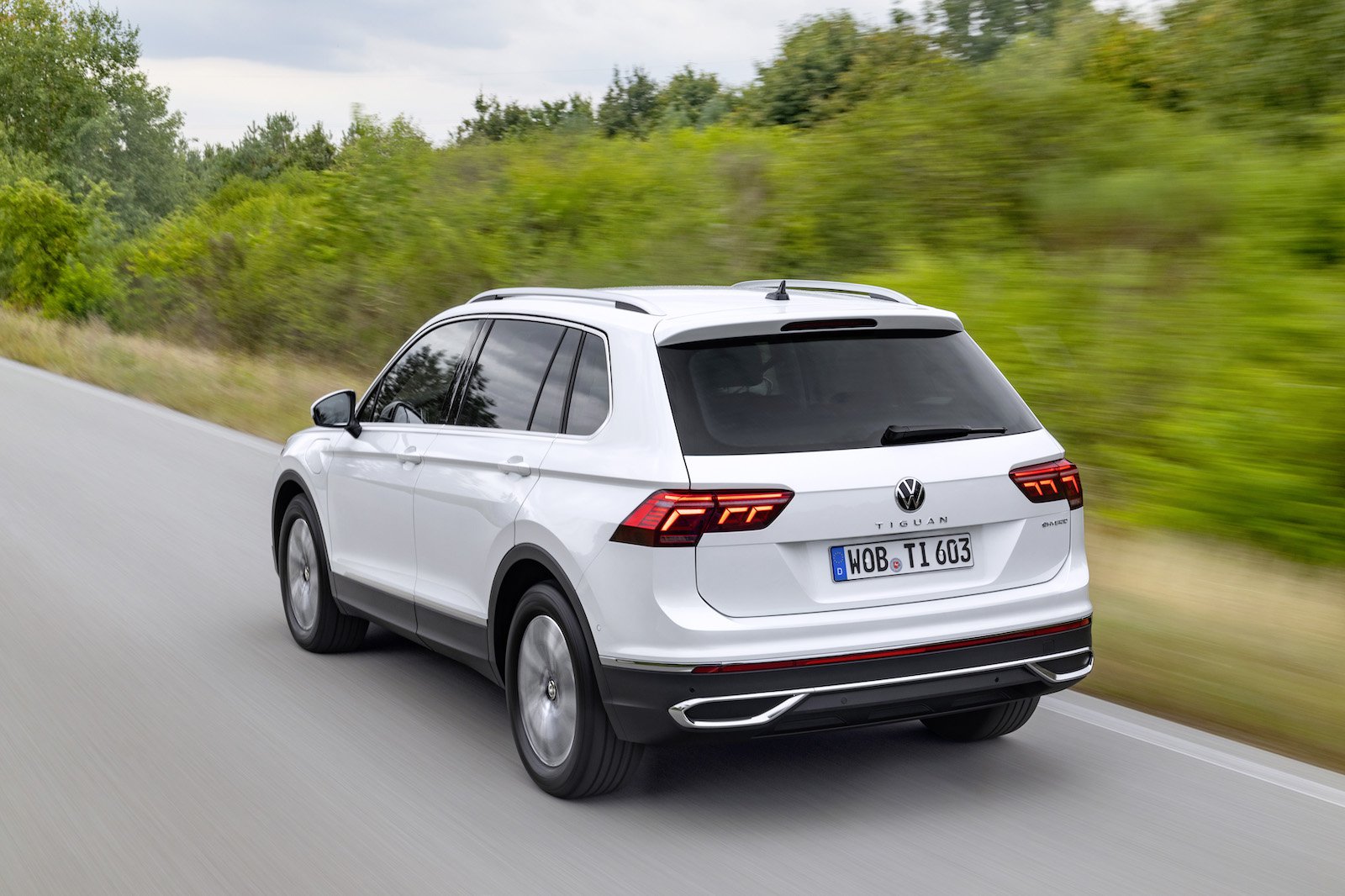 It's not all about going green, though; there's another new model that’s more focused on burning hydrocarbons than reducing them, called the Tiguan R. With 316bhp, four-wheel drive and a 0-62mph time of 4.9sec it won’t please Greta Thunberg, but your children will never be late to school again. We’ve driven the R, too, so keep an eye out for our review of it later this week.

2021 Volkswagen Tiguan eHybrid on the road

Despite being packed with complex tech, the eHybrid is no harder to drive than a regular automatic Tiguan. Press the starter button, drop the car into drive, and provided the battery has sufficient charge, the eHybrid defaults to electric mode, allowing you to pull away in complete silence.

Impressively, the electric motor can power the car up to motorway speeds easily enough, and with instant punch on tap, the unassuming Tiguan has enough shove to beat almost any other regular family SUV away from the lights, with 0-62mph taking just 7.5sec when the petrol engine joins the party.

Of course, if you decide to use all of that performance, the eHybrid’s official all-electric range of 31 miles will take a dive. But should you drive carefully, plugging your Tiguan in both at home and at work, then the majority of commuters will rarely need to fill up. Even on our mixed 75-mile test route that took in a couple of towns, some quick country roads and a long stint on the Autobahn, the trip computer recorded a respectable 55mpg. 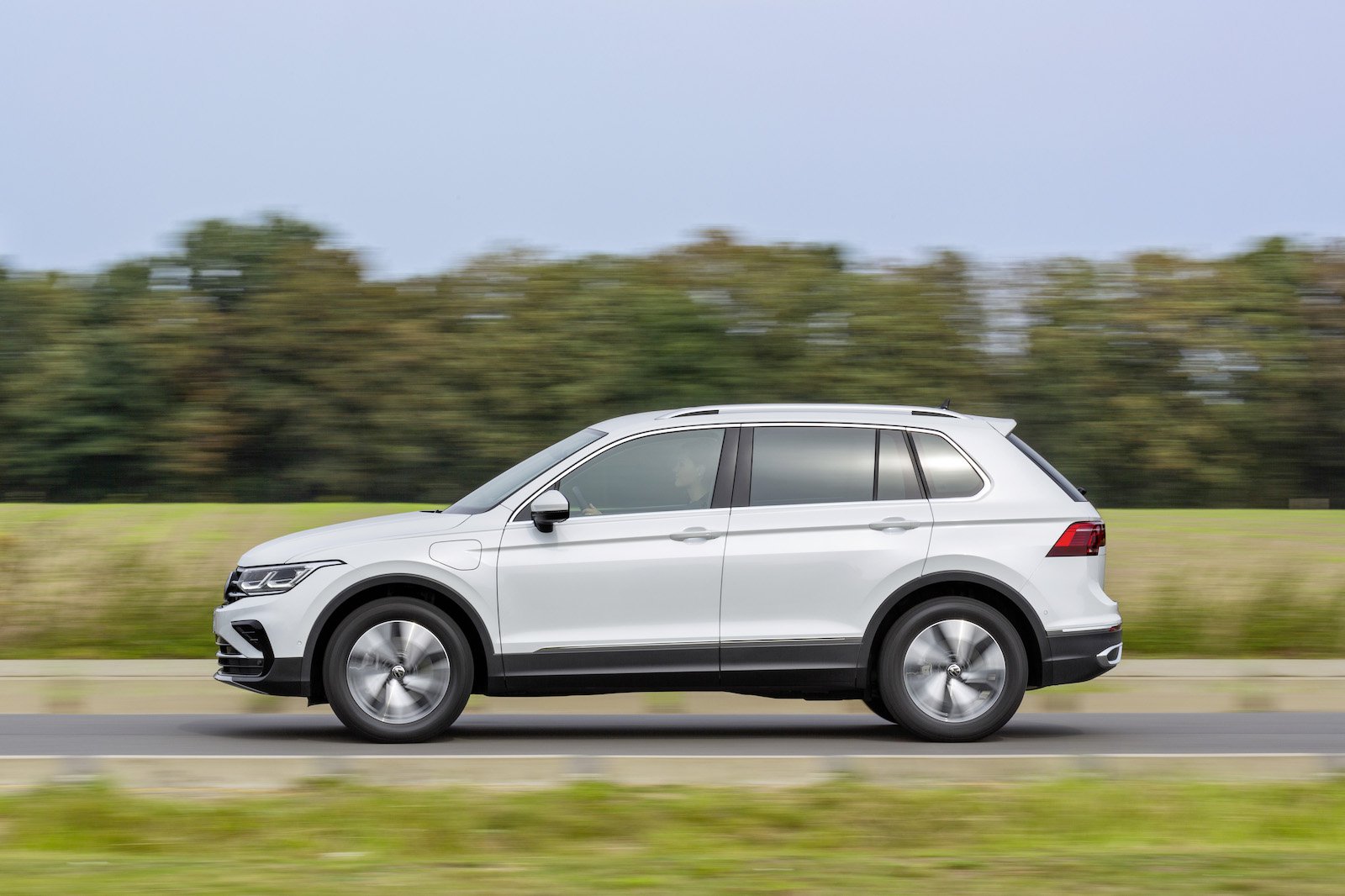 And handily, even when the battery is depleted, there is usually just about enough juice left to start up and pull away on electric power before the car switches over to Hybrid mode, which automatically makes the best use of both power sources to optimise electric range and minimise fuel consumption.

It will even use information from your sat-nav to work out when to use the electric power the most on your journey; not that you’ll notice the 1.4-litre petrol kicking in, so smooth is the transition between electric and petrol power.

In terms of handling, the eHybrid is a little lazier through quick direction changes than the regular Tiguan, but in cars equipped with the optional Dynamic Chassis Control (DCC) you can use ‘GTE’ mode to firm up the suspension, which keeps the car more planted in the corners with less lean. It also stops the nose from rearing up when you get hard on the accelerator pedal, whereas in normal mode, if you give it the full beans, the weight of the car gets shifted to the rear making it all too easy to spin the front tyres away from the line.

Ultimately, though, the eHybrid is a composed and well-rounded SUV with a largely comfortable ride, especially at speed. Its extra mass makes it feel a bit more lumpen than the regular Tiguan,  but by no means jarring. And although the regenerative brakes, which help top up the battery, feel spongy compared with those of a conventional petrol or diesel model, many hybrid rivals are no better and you do get used to them with time.

Inside the Tiguan, the basic architecture of the dashboard hasn’t changed, but look closer and you will notice that Volkswagen has done away with most of the buttons, so even the climate control panel is now touch-sensitive. 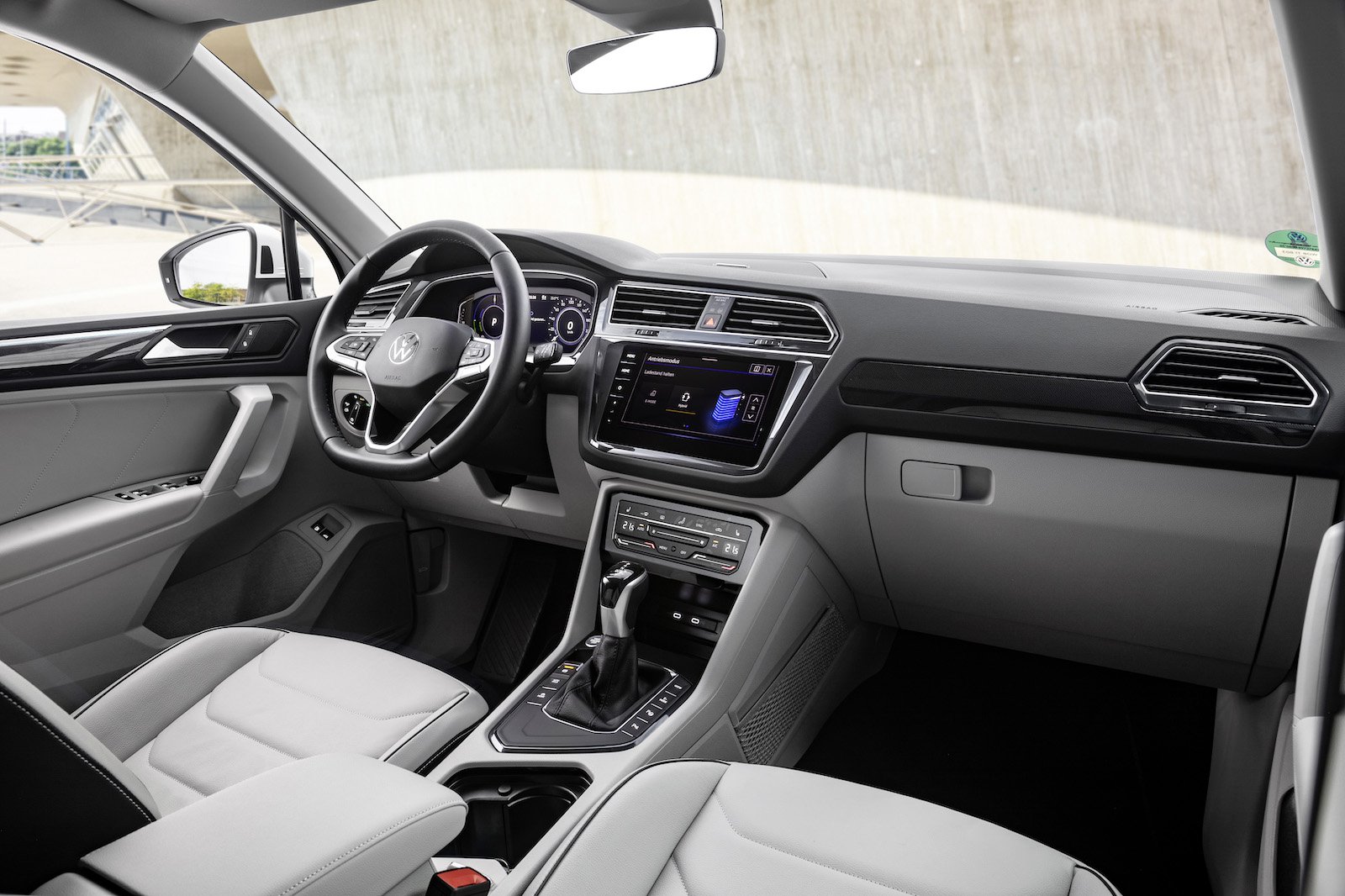 Aesthetically, it might be a step forward, but from a functionality perspective, it’s a jump in the wrong direction. By eschewing physical buttons in favour of small, touch-sensitive pads, even changing the temperate setting is distracting to do while on the move, because a touch-sensitive button is impossible to find unless you take your eyes off the road. We’d also advise you avoid the optional ‘touch controls’ that you can spec for the steering wheel – these replace the physical buttons that come as standard and they’re frustratingly easy to activate inadvertently.

Entry-level Tiguan’s get an 8.0in infotainment display, but our test car came equipped with the range-topping 10.0in Discovery Pro infotainment system. It looks sharp and responds quickly to inputs, but we prefer the BMW X1’s iDrive unit with its physical rotary controller because it’s easier to operate on the go. Unfortunately, we don’t have full UK trim specifications yet, but higher-spec Tiguans should also get Wireless Apple CarPlay and Android Auto smartphone mirroring.

In terms of overall quality, the materials, fit and finish are excellent, with leather, soft plastics and coloured trims abounding and hard plastics only used low down where you don’t see or touch them. The driver’s seat also has loads of adjustment and is placed nicely in line with the wheel and pedals allowing you to sit naturally. Visibility is also no issue, thanks to big windows and the availability of parking sensors and camera systems.

Inside, you’ll find there is more space than you get in a Nissan Qashqai, but the battery pack does impinge on boot capacity, reducing it by 139 litres to 476 litres. It’s a minor compromise (it’s still more than you get in a Qashqai or Kia Sportage), but one worth checking you can live with prior to purchase.