Getting comfortable in the Volkswagen Tiguan is easy, thanks to there being plenty of seat and steering wheel adjustment, along with well placed pedals and a handy rest for your clutch foot. Granted, you don’t sit quite as high as you do in a Volvo XC40, but you still feel like you’re driving a proper SUV rather than just a jacked-up family hatchback. Lumbar adjustment for the front seats is standard on Life trim and above.

If you’ve spent time in other cars from the Volkswagen stable, you’ll soon find your way around the Tiguan’s dashboard. However, it’s disappointing that the designers have, as with several other models, decided to do away with almost all of the buttons in the Tiguan's interior.

By jettisoning physical buttons in favour of small, touch-sensitive pads, even changing the temperature setting has been made distracting to do while on the move; a touch-sensitive button is impossible to find unless you take your eyes off the road. And on top of that, R-Line models also receive a sports steering wheel with ‘touch controls’ as standard – these controls replace the physical buttons (that you get on the regular car) and are frustratingly easy to activate with an inadvertent brush of your thumb.

Although, as we’ve said, some rivals place you even higher, those who love the view afforded by a high-set driving position will certainly appreciate the Tiguan. And while it’s true that rear visibility isn't impressive due to chunky pillars at the back of the car, the same is true for rivals such as the Seat Ateca and Skoda Karoq.

All trims get automatic LED headlights and auto wipers, too, although you’ll need to jump to Life trim to get front and rear parking sensors as standard. Elegance adds a rear camera, while a 360 degree camera system is available on all but entry-level Tiguan models. Life trim also adds main beam assist while Elegance gets adaptive lights that allow you to keep main beam on without blinding other drivers. 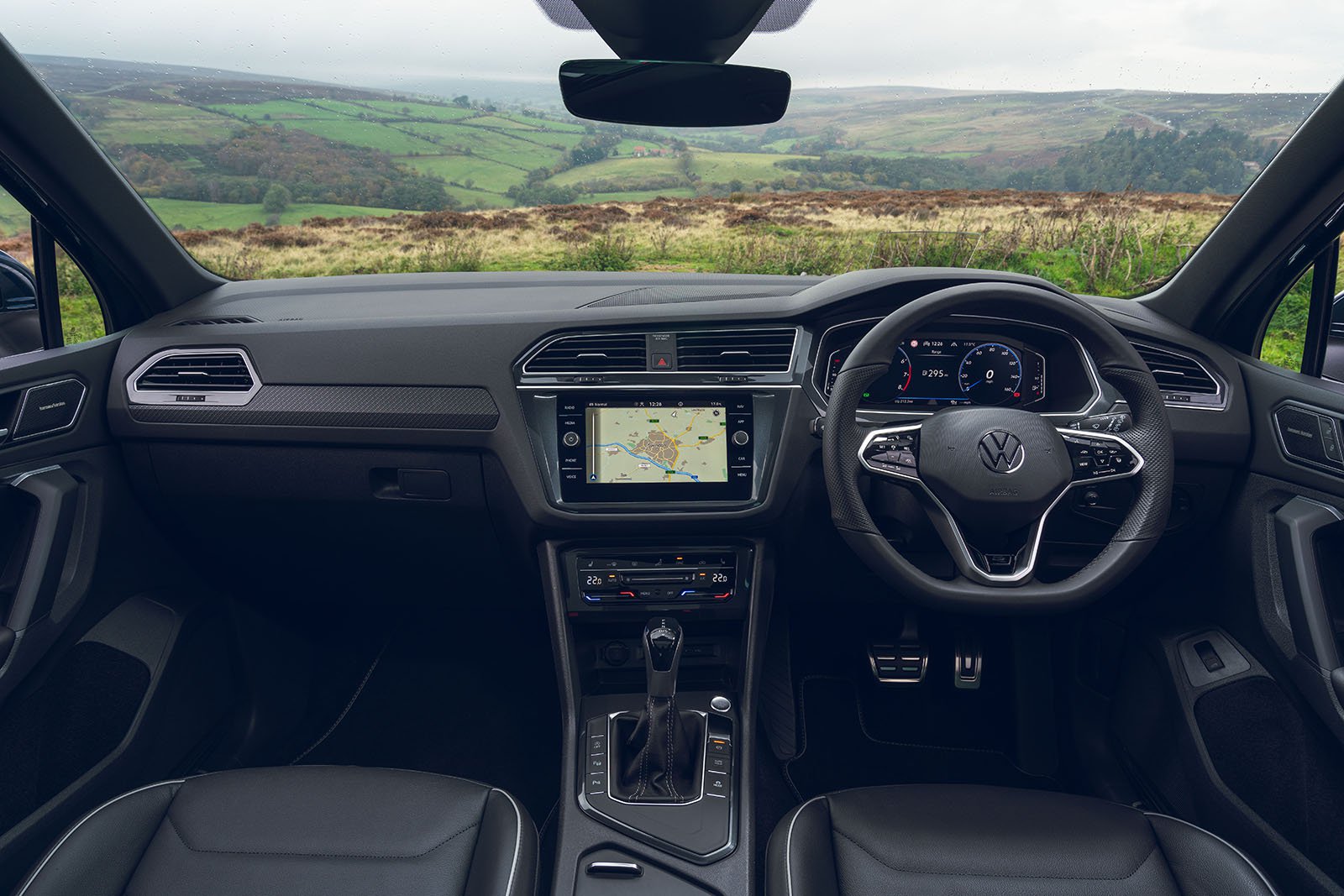 All Tiguans get an 8.0in touchscreen as standard with Apple CarPlay and Android Auto, with Life trim adding sat-nav. We’ve tried the latter system and found it to be responsive to prods, although the display looks a little small and rather low in the dashboard.

We’ve also sampled Volkswagen’s range-topping 9.2 Discover Pro infotainment system that’s optional on all but the entry-level Tiguan. It’s a sharper-looking system that responds quickly to inputs, but we prefer the BMW X1’s iDrive unit with its physical iDrive controller because it’s easier to operate on the go.

The Tiguan may not have the most exciting interior in the business, but it's typically Volkswagen. That means plenty of soft-touch plastics and controls that work with a reassuring precision.

You'll see some hard, scratchy plastic lower down on the dashboard, but this is at least kept away from the areas you regularly touch. Even so, the Karoq’s interior feels a little more modern, while a Volvo XC40 and Range Rover Evoque both seem plusher.

Classy, comfortable and great for safety. A former What Car? C...