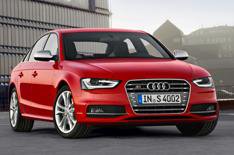 This is Audis new A4 its answer to the all-new BMW 3 Series, which goes on sale just one month earlier.

Cosmetic changes bring the A4 into line with Audis latest models. At the front theres a new bonnet, grille, bumper and headlights, which echo those of the latest A6. Audis latest front grille with angled upper edges is central to the new look, while the new headlights are smaller and have a wave along their lower edge. Inside, there are new steering wheel designs, an updated MMI system and upgraded trim.

The updated engine range reduces fuel consumption by 11% on average, with a similar reduction in CO2 emissions. All versions now have an engine stop-start system as standard, while tweaks to the rear suspension are designed to improve the A4s ride and handling.

Our first drive suggests that the changes don't go far enough, but the A4 remains a solid all-rounder.

BMW 3 Series
What is it? Latest version of BMWs best-selling model
Price from 24,880
On sale February

The latest 3 Series saloon is longer (9cm) and lower (5mm) than the current car, yet its 6mm narrower (excluding the mirrors).

A range of new turbocharged engines provides the power. From launch, there are two petrol versions: the four-cylinder 328i and the six-cylinder 335i. There is also a 320d model, available in standard and Efficient Dynamics versions.

Both of these have the same power output (161bhp and 181bhp) as before. CO2 emissions for the standard model have dropped from 125g/km to 118g, while the Efficient Dynamics has the same 109g/km figure as in the current car. A six-speed manual gearbox is standard, while BMWs latest eight-speed automatic box is an option across the range. The latter cuts CO2 by up to 16%.

So far, weve driven only the 328i and 320d, but both give excellent performance and good flexibility. The new cars handling is what really impresses, though: its rear-drive chassis is beautifully balanced and makes for a hugely enjoyable drive. Best of all, the ride on this new model seems much more comfortable than on its predecessor.

In the spring, three more four-cylinder, 2.0-litre models the 320i petrol and the 316d and 318d diesels are due. In the autumn, BMW will launch a six-cylinder diesel model, four-wheel-drive versions and a hybrid model called ActiveHybrid 3.

The DS5 is the largest of Citroen's DS premium models and its being pushed as a rival for high-end family cars and compact execs like the BMW 3 Series.

The DS5 will be available with the same innovative Hybrid4 set-up available for the Peugeot 3008, which mixes a front-wheel-drive diesel powertrain with an electric motor at the back axle. The biggest-selling DS5 variants are likely to be powered by conventional petrol and diesel engines, however.

The driving experience is a mixed bag: grip and body control are good, but the ride is very firm.

The DS5's cabin is a treat, with classy materials and switchgear and a real cockpit feel. There's plenty of room in the back for two people, but headroom is tight for those over six feet.