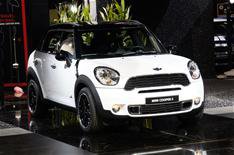 This is the Mini Countryman, which made its public debut at the Geneva motor show today.

What is it?
Mini is describing the Countryman its new crossover as a car for Mini lovers who want to start a family.

The company admits that its current range of hatchback, convertible and Clubman cars is not suitable for family use, but the longer, wider, taller Countryman is designed to remedy this.

What's new?
The emphasis is still on fun, but efficient motoring. The 1.4- and 1.6-litre engines develop from 90 to 184bhp, with emissions starting at just 113g/km for the entry-level diesel unit and rising to around 150g/km for the range-topping Cooper S.

Two- and four-wheel-drive variants a first for Mini will also be offered, making the Countryman an obvious rival for the Skoda Yeti.

The all-wheel-drive system is based on parent company BMW's x-Drive and uses an electro-hydraulic clutch on the rear differential to bring the rear wheels into action as necessary.

'We are not becoming an off-road brand all of a sudden, but if you think back to the weather we've had during recent months you can see why we are making this available,' said Jochen Goller, the head of Mini in the UK.

More photos of this car
> Image 1: click for a larger view
> Image 2: click for a larger view
Four- or five-seater
All UK versions of the Countryman will be five-seaters with a three-seat rear bench, but two individual rear seats will be offered as a no-cost option. There's also a rail running along the spine of the car, which is used as an anchorage point for storage boxes, a source of ambient lighting and a power supply for electrical devices such as MP3 players.

How much will it cost?
Mini's Countryman crossover car will cost from 16,000 when it goes on sale in September.

• Cooper S All4 will cost 22,030, while the Cooper D costs 19,875. Fuel economy and emissions details for the All4 drive models will be released in the summer, says Mini.