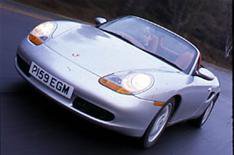 Porsche has only one model in this year's survey, but with the Boxster proving so popular on the used market, it's a worthy inclusion.

Owning a thoroughbred sports car is rarely cheap, and the Boxster is no exception, especially one with merely average reliability.

It had the highest average repair bill at 838, and one claim was 6600! If things go wrong, you could be seriously out of pocket.

Roughly a quarter of all warranty repairs concerned the Boxster's electrics.

Despite Renault being at the bottom of our survey for another year, its cars are, on average, slightly more reliable than last year.

Its strongest model was the ('91-'98) Clio, which suffered 27 claims per 100 cars, but the rest of its range were much further down the table.

Renaults suffered with electric faults more than most marques.

After last year's respectable result, Rover has slipped down the rankings to merely average.

Despite the company having some of the youngest cars in the survey, only one of its models, the ('99-'05) 25, received top reliability marks.

Rovers suffered axle, suspension and electrical problems, and there was also a high percentage of engine and heating system issues reported.

Saab is moving down the table compared with last year.

Engine problems are a concern for owners, especially on the most recent 9-3.

Of the Ibizas that failed, more than 40% needed repairs to the electrics. The Alhambra MPV was the least-reliable Seat, with 50 claims per 100 cars.