More for you |
The best deals on our most in-demand carsThe best new car leasing deals on seven-seatersThe secrets of washing your car to perfection2021 BMW iX3 electric SUV revealed: price, specs and release dateShould I ditch my diesel-engined Porsche?
Home
News
Results by brand: 25th to 30th
news 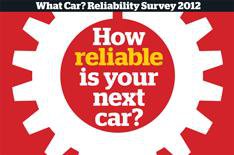 BMW climbed two places in 2011, but drops five this year.

Another drop for Audi, because of high repair costs and a poor RI score.

Jaguar had been improving until 2011, when it fell to 25th from its previous 17th.

This year, it's fallen again. Its best model, the XF, has a failure rate of just 24% and the lowest average repair cost of any Jaguar at 267.

The stand-out figure for people considering a used MG is the rate at which their engines tend to run into trouble. The 28% figure for problems in this important area shows that not only do the engines go wrong more than any other parts of MG cars, but also more often than the engines of any other manufacturer.

The ZR hot hatch version of the Rover 25 supermini manages a relatively good failure rate of 35%, but the TF sports car fails more than half the time and will cost an average of 422 to put right.